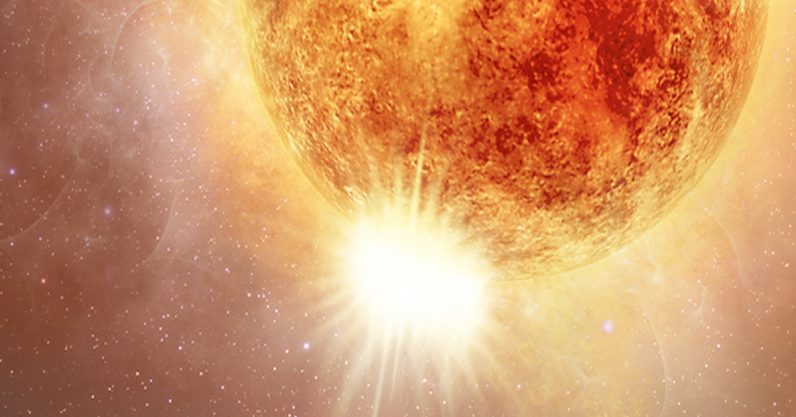 Betelgeuse is one of the best-known stars in the night sky, as well as the easiest to find. New examinations of this behemoth star suggest it is both smaller — and closer — than astronomers believed.

This red giant star will, one day, explode as a supernova. However, it is challenging to determine when the eruption will take place. In addition to new measurements of the star’s size and distance, this new study from Australian National University (ANU) suggests the star is not likely to erupt for 100,000 years.

At the end of 2019, Betelgeuse appeared to dim significantly as seen from Earth. Researchers eventually determined the dimming was the result of material being ejected from Betelgeuse, which cooled, absorbing light from much of the star. A similar dimming was seen again this year, but the cause of this recent event may not be the same as last time.

“It’s normally one of the brightest stars in the sky, but we’ve observed two drops in the brightness of Betelgeuse since late 2019. This prompted speculation it could be about to explode. But our study offers a different explanation. We know the first dimming event involved a dust cloud. We found the second smaller event was likely due to the pulsations of the star,” Dr. Meridith Joyce from The Australian National University (ANU) explains.

[Read: NASA’s robot is about to land on asteroid Bennu to unlock the secrets of life]

“Let’s turn on the juice and see what shakes loose.” — Beetlejuice

Stars fuse (meld together) various elements, depending on their age and mass. By studying movements (like sound waves) on the surface of the star suggest Betelgeuse is still fusing helium. That would mean that the star is not close (on a human timescale) to erupting as a supernova.

Earlier observations found that, if placed at the center of our solar system, the massive star Betelgeuse would stretch out beyond the orbit of Jupiter. This new study finds its body would only reach around two-thirds that distance, roughly 765 times the diameter of the Sun.

Based on this size of the stars, astronomers determined Betelgeuse sits just 530 light-years from Earth — about 25% closer than expected.

In the video below, take a look at the strange happenings on Betelgeuse with Dr. Andrea Dupree from the Center for Astrophysics. (Video credit: The Cosmic Companion)

“It’s still a really big deal when a supernova goes off. And this is our closest candidate. It gives us a rare opportunity to study what happens to stars like this before they explode,” Joyce stated.

If Betelgeuse were too close to Earth, the eventual supernova could cause an extinction here on Earth. However, even at 530 light-years distance, our planet will still be safe from the eventual explosion.

Skywatchers observing Betelgeuse should also keep an eye (or two!) out for the Orionid meteor shower in the same region of the sky, peaking on the nights of October 20 and 21.

Read next: Learn all about DevOps and ace the certification exams too