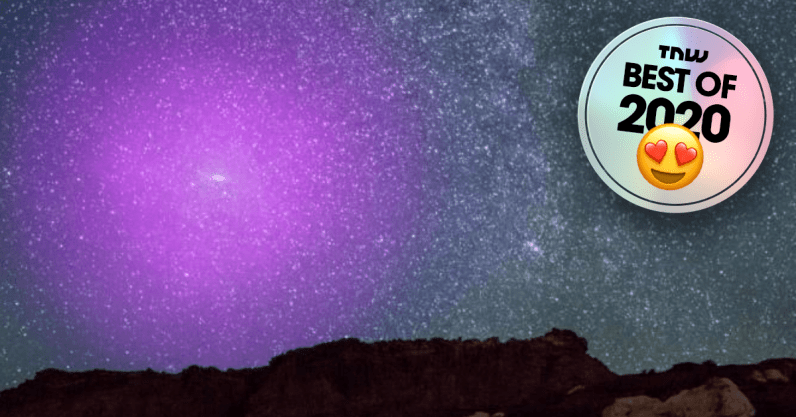 A magnificent cloud of diffuse halo of plasma surrounding our galactic neighbor, Andromeda, was recently mapped by astronomers using the Hubble Space Telescope.

This close proximity means that Andromeda, destined to collide with the Milky Way in several billion years, has made “first contact” with our home galaxy.

The halo was found to possess a layered structure containing a pair of distinct nested shells of gas. Examination of this halo, which supplies material for the formation of stars, can reveal information about the birth and deaths of stars within the Andromeda Galaxy. The discovery of heavy elements, produced in the explosions of massive supernova stars, reveals evidence for the deaths of vast numbers of behemoth stars.

“We find the inner shell that extends to about a half million light-years is far more complex and dynamic. The outer shell is smoother and hotter. This difference is a likely result from the impact of supernova activity in the galaxy’s disk more directly affecting the inner halo,” Dr. Nicolas Lehner of the University of Notre Dame, describes.

The Andromeda Galaxy, also known as M31, is roughly the size of the Milky Way Galaxy. Containing roughly one trillion stars, this massive family of stars can be seen as a smudge in the sky each Autumn. If the halo were visible, the sight would dwarf all other targets in the sky.

Astronomers set the sights of the Hubble Space Telescope’s Cosmic Origins Spectrograph (COS) on 43 quasars (highly-active galaxies) set behind the galactic halo, viewing light traveling through several regions of the cloud of plasma. Because the halo gives off just a small amount of electromagnetic radiation, studying light passing through the cloud makes it easier to study.

“Previously, there was very little information — only six quasars — within 1 million light-years of the galaxy. This new program provides much more information on this inner region of Andromeda’s halo,” explained co-investigator J. Christopher Howk of Notre Dame.

I was born walking, born in the nowhere between galaxies. ― Hannah Lillith Assadi, Sonora

Andromeda is the only galaxy close enough and large enough for astronomers to study using this method. And only one telescope was capable of carrying out the tasks required for Project AMIGA (Absorption Map of Ionized Gas in Andromeda) — The Hubble Space Telescope.

The Milky Way is also likely to have its own halo, similar to the one seen around Andromeda. However, it is challenging to study our own halo from within its structure. Smaller halos have been seen around other, more distant galaxies, but this is the most detailed study of such a galactic halo ever conducted.

In four billion years, the Andromeda Galaxy and the Milky Way will collide — and it’s already come by for a halo!

Read next: New study suggests we all might be children of alien organisms