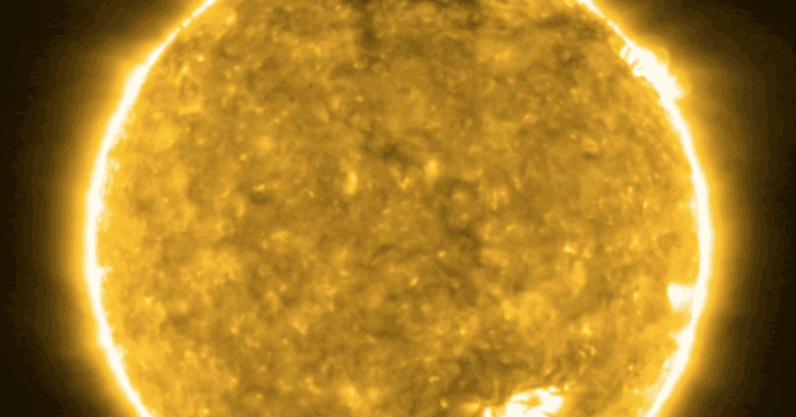 The Solar orbiter just produced the closest pictures ever taken of the Sun, revealing our parent star in stunning detail.

These are the first images from the Solar Orbiter released to the public. This joint mission from NASA and the ESA launched on February 9 of this year, and it made its first close pass of the Sun near the middle of June.

“These unprecedented pictures of the Sun are the closest we have ever obtained. These amazing images will help scientists piece together the Sun’s atmospheric layers, which is important for understanding how it drives space weather near the Earth and throughout the solar system,” said Holly Gilbert, NASA project scientist for the mission at Goddard Space Flight Center.

I traveled 150 million kilometers and forgot the marshmallows?

The current global pandemic led to the shutdown of operations at the European Space Operations center (ESOC) in Germany in the midst of testing.

On June 1 and 6, the spacecraft passed through the ion and dust tails of comet ATLAS, which recently shattered while orbiting the Sun.

Two weeks later, on June 15, as the spacecraft came within 77 million kilometers (48 million miles) or our parent star, a suite of 10 instruments came to life.

Normally, the first images from instruments are tests, not expected to produce results. But, this “first light” was different — seen in data from the Extreme Ultraviolet Imager (EUI) were previously-unseen “campfires” dotting the Sun. The EUI examines the Sun in ultraviolet wavelengths, showing detail occurring at the surface of the Sun, where temperatures hover around a million degrees. The EUI can see detail as small as 400 km (250 miles) across.

“The campfires we are talking about here are the little nephews of solar flares, at least a million, perhaps a billion times smaller. When looking at the new high resolution EUI images, they are literally everywhere we look,” David Berghmans, an astrophysicist at the Royal Observatory of Belgium, explains.

The cause of these campfires is uncertain, but they may be hypothetical nanoflares which could heat the corona to extreme temperatures.

Temperatures of these campfires will need to be precisely measured in order to determine their origin. Fortunately, the Spectral Imaging of the Coronal Environment, or SPICE instrument, also onboard Solar Orbiter, is capable of doing exactly that. Data from that instrument will be available to researchers soon.

Hey Dad! Watch how high I can fly! — Icarus

In addition to these eyes on the Sun, the Solar Orbiter also features the Polarimetric and Helioseismic Imager (PHI) instrument, providing information on the changing movement of the Sun, as well as the magnetic field of our parent star.

Meanwhile, the Metis coronograph blocks out most of the light from the Sun while studying the corona, or atmosphere, of our parent star. The video below shows look at the Solar Orbiter findings, and the closest pictures ever taken of the Sun.

The Heliospheric Imager (SoloHI) telescope senses solar wind in the immediate vicinity of the spacecraft. By studying these charged particles released by our neighborhood star, astronomers hope to learn more about processes deep inside the Sun.

The Solar Orbiter, combined with the Parker Solar Probe and solar observatories on Earth including the Inouye Solar telescope, could open up new understanding of the star that brings life to everything on Earth.