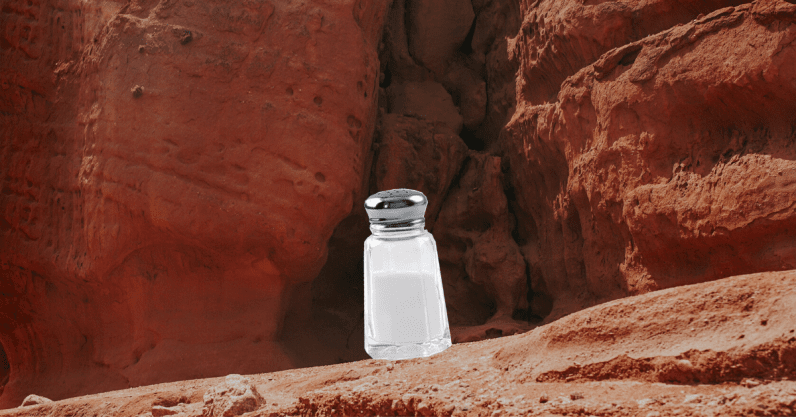 Microorganisms from Earth traveling to Mars aboard spacecraft would struggle to survive in pockets of salty brine on the Red Planet, a new study suggests. This could be good news for the exploration of Mars, as these conditions would make it less likely the planet may be contaminated by microbes from Earth, hitching a ride on landers touching down on the alien surface.

Planetary protection from microbes from Earth has been a goal of NASA and other space agencies since the earliest days of space exploration.

“Such regions would be of concern for planetary protection policies owing to the potential for forward contamination (biological contamination from Earth),” researchers described in an article detailing their study, published in Nature Astronomy.

Southwest Research Institute (SwRI) investigators found the low temperatures and extremely dry conditions on Mars would cause water to instantly freeze, boil or evaporate. However, liquid water might still exist in pockets of highly-salty water, which could, potentially, be found around the Red Planet.

“Our team looked at specific regions on Mars — areas where liquid water temperature and accessibility limits could possibly allow known terrestrial organisms to replicate — to understand if they could be habitable,” explained Dr. Alejandro Soto, a senior research scientist at SwRI.

Although liquid water cannot currently be found on the surface of Mars, computer models suggest these pockets of brine could exist from the equator to high latitudes on Mars for a short period each year, for up to six hours per day.

“Briny pockets on Mars are small, smaller than a shot glass. Think droplets, at most. We have images of potential droplets on the Phoenix lander on Mars, which is consistent with what we expect from laboratory research and modeling,” Dr. Soto tells The Cosmic Companion.

This projected lifespan of these briny pockets is significantly greater than previously believed, meaning they may be more common on Mars than astrobiologists believed. However, temperatures in these pockets are still too cold to support terrestrial lifeforms which may find themselves on the Red Planet.

The highly-arid conditions on Mars would lower the temperatures at which water could reach high levels of humidity and tolerable water activities. These are measures of how easily water can be used by lifeforms.

“We used Martian climate information from both atmospheric models and spacecraft measurements. We developed a model to predict where, when and for how long brines are stable on the surface and shallow subsurface of Mars.” Soto explained.

Temperatures in these pockets of brine are expected to go no higher than -48 Celsius (-55 Fahrenheit). This is around the temperature that is often considered to be the lower limits for life.

“Almost everyone interested in Mars wants to know whether there are any scenarios under which life could survive on current Mars. Thus, we decided to investigate whether the short-lived, unstable droplets of water and brine, previously observed on Mars, could sustain life as we know it… [T]he level of saltiness, combined with temperature would… prevent life as we know it to survive,” Soto explains.

Life is tough — but these lifeforms are tougher

Here on Earth, we find life surviving under a wide range of extreme environments. In regions which are too hot, too cold, too acidic, or basic for most life, some form of life will likely make their home. Even without light, extreme levels of dryness, or under the ocean floor, life evolves to utilize available resources.

“Life on Earth has radiated into every conceivable — and in some cases almost inconceivable — ecological niche,” states Chris Impey of the University of Arizona in Tucson.

Discovered in an underwater vent in 1997, Pyrolobus fumari can survive at temperatures up to 113 degrees Celsius (235 degrees Fahrenheit). Even that extreme was recently surpassed by a related microbe found 2400 meters (7875 feet) beneath the surface of the Pacific Ocean, at a vent called Faulty Towers. These organisms, called strain 121, lived — and possibly even reproduced — at temperatures up to 121 Celsius (almost 250 Fahrenheit).

At the opposite extreme, some studies suggest that a bacterium called Colwellia psychrerythraea can survive at temperatures as low as -196 C (-320 F), the temperature of liquid nitrogen.

Some single-celled organisms are known to live out their lives without oxygen, and recently, researchers announced they found the first multi-cellular organism capable of living without the gas. Henneguya salminicola, a parasite that infects salmon, was examined, and found to lack the capacity to process oxygen.

Perhaps the best-know ultra-hardy creature are tardigrades, which can survive decades without food. Even in the vacuum of space, these water bears can still survive, and one colony of the creatures may already be living on the moon, following the crash of the Beresheet spacecraft in April 2019.

Even in the so-called Dead Sea, life still finds a way to eke out a living. Water there contains eight times as much salt as the ocean, Still, Haloarcula marismortui has developed proteins that allow it to survive in the high-salinity environment.

Study of the Martian surface conducted by the Opportunity rover show deposits of the salt magnesium sulfate, which could have been left by ancient oceans on the Red Planet. Some researchers believe this finding could show watery regions of Mars may be too salty to allow life to survive.

“Even extreme life on Earth has its limits, and we found that brine formation from some salts can lead to liquid water over 40% of the Martian surface but only seasonally, during 2% of the Martian year. This would preclude life as we know it,” Soto stated.

If this study is correct, it could, potentially, mean that lifeforms on Mars are either rare, or far different from life on Earth. However, it could also mean that we in less danger of contaminating the planet with life from Earth than currently estimated.