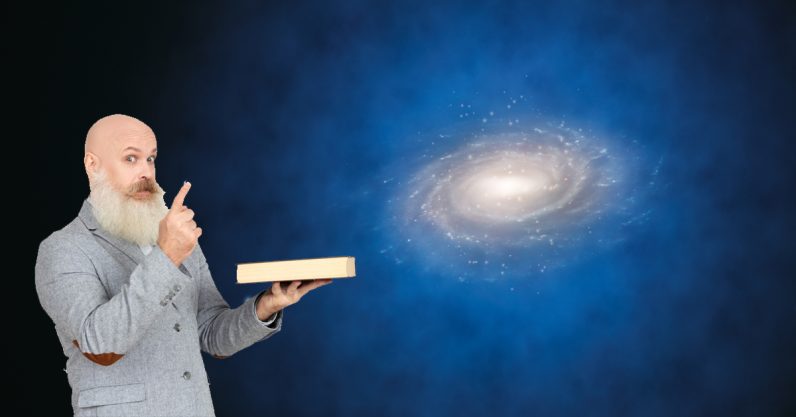 Dark matter may not give off any light or radiation, but we might be able to watch it smash into atoms here on Earth.

Dark matter makes up 85% of all matter in the Universe, but astronomers have never seen it. The nature of this mysterious — something — remains largely unknown.

The mass which we call dark matter does not give off light, heat, radio waves, or any other form of electromagnetic radiation. But, astronomers and physicists know something (and a LOT of it) is out there. Without dark matter, galaxies would tear apart, and clusters of galaxies would fly to pieces. This gravitational bond between dark matter and “normal” matter is how it was first detected.

Can dark matter be seen? One detector to do so uses these white detectors with a golden inside, looking like track lighting.

Read: [A Japanese spacecraft sent back images of the rocky asteroid ‘Ryugu’ — and they’re stunning]

Dark matter can also interact with the protons and neutrons in the nucleus of atoms, producing flashes of light (and other signals) called scattering. This is akin to a pair of people walking around a completely dark room. Although it would be impossible to see the other person, a participant could hear the sound of their partner when they stub their toe on the corner of a table.

A new study now suggests using this phenomenon to detect dark matter as it interacts with “normal” matter in detectors already in operation around the globe.

Lawrence Berkeley National Laboratory (Berkeley Lab/LBL) and UC Berkeley researchers propose looking for interactions between dark matter and the nuclei of atoms. These can result in the release of negatively-charged electrons, or neutrinos (elementary particles having no charge and almost no mass).

In the video above, physicist Janet Conrad of MIT explains what we know, so far, about neutrinos, and why they are so hard to detect.

Neutrinos act like ghost particles, easily passing through matter, as they continually morph from one form to another. Each second, hundreds of trillions of neutrinos pass through your body, without interacting with the matter of which you are composed.

These particles were first proposed around 1930 by physicist Wolfgang Pauli, based on his theoretical studies of radioactive decay. He originally wanted to call the neutrally-charged particles neutrons but did not publish his suggestion. That name was soon taken by the discovery of the particle we now call neutrons.

Pauli soon settled on the name neutrino for his proposed particle, meaning “little neutral one” in Italian. These building blocks of matter were first found in experiments in 1956.

Who’d you call a WIMP?

Several theories about the nature of dark matter have been suggested, and one of the leading candidates is WIMP’s (weakly-interacting massive particles). These postulated particles would interact with each other only through gravity, and the weak force that drives some forms of radioactive decay.

WIMP particles seem to be compatible with the standard model — the set of equations and theories which helps predict the large-scale behavior of subatomic particles.

However, the search for WIMP’s has, so far, proven fruitless, driving researchers to propose other means to account for the effects of dark matter.

“The WIMP paradigm is very easy to build into the Standard Model, but we haven’t found it for a long time,” said Jeff Dror, a postdoctoral researcher at Berkeley Lab.

A new analysis of data already collected by particle accelerators could reveal the presence of dark matter, investigators suggest.

“Neutrinos alone, among all the known particles, have ethereal properties that are striking and romantic enough both to have inspired a poem by John Updike and to have sent teams of scientists deep underground for 50 years to build huge science-fiction-like contraptions to unravel their mysteries.” — Lawrence M. Krauss

One possibility to help explain the effects of dark matter would be so-far-undiscovered particles, such as sterile neutrinos, which interact with other matter only through gravity.

“This would make them even harder to spot than the tricky ‘regular’ neutrinos. Gravity is the weakest of all the forces, and neutrinos are very light — so they don’t give gravity much to work with. Finding slight signals amidst the chaos of the universe will be tough, but not impossible,” researchers at the Fermi National Accelerator Laboratory explain.

In the video above, a time-lapse photo of the installation of the inner detector of the LZ detector. This instrument will remain sealed for five years until it is decommissioned.

Researchers set their sights on two types of interactions between dark and regular matter.

During the first of these, the neutral current process, particles of dark matter interact with the subatomic particles which make up the atoms in the instrument.

“Searches for scattering look for a DM particle depositing its kinetic energy onto a target within the detector, typically a nucleus or an electron,” researchers report in an article published in the Physical Review Letters.

The second class of these interactions are charged current studies, in which this recoil is accompanied by the release of an electron. These charged interactions can also create a domino effect of reactions, resulting in the release of particles from nuclei within atoms.

The right tech for a dark job

A detector designed to look for these signals needs to be extremely sensitive, with little background “noise.”

The LUX-ZEPLIN (LZ) project aims to find dark matter, utilizing a dark matter detector placed in a retired mine in South Dakota. Inside the instrument sits 10 metric tons (11 tons) of liquid xenon.

Researchers suggest data collected at other Xenon-based neutrino detectors could be used in the search for evidence of dark matter.

“The data is already basically sitting there. It’s just a matter of looking at it,” Dror said.

Signals produced as neutrinos strike protons or neutrons inside the nucleus of an atom can be predicted. Detecting these signals, if they occur, could be easier than other means of directly detecting the presence of dark matter, researchers suggest.

The team at the center of this study is actively working with other researchers who may have already collected data needed to examine this idea.

These techniques described in the study could open up new searches for dark matter particles having energies thousands of time greater than current technology allows.

Read next: SEO matters. This package of web analysis tools can help reshape your web performance