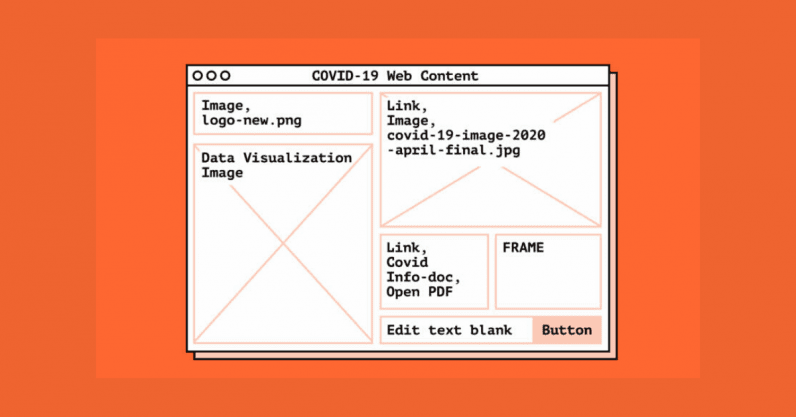 Every state in the U.S. has launched at least one website with updates about the novel coronavirus outbreak. Unfortunately, the majority are difficult or unusable for visually impaired users, according to a survey conducted for The Markup by the web accessibility group WebAIM.

Forty-one of the 50 state pages we surveyed contained low-contrast text, which can be challenging for users with low vision, including seniors, who are at higher risk in the outbreak.

For instance, South Dakota’s coronavirus website features light-orange text on a white background—a combination that would make even some sighted users squint but renders the page unreadable for some low-vision users who cannot distinguish the characters from the background. South Dakota’s health department didn’t respond to a request for comment.

Navigation was another challenge for users with visual disabilities. Thirty-one of the 50 state pages contained empty links or buttons, which means a screen reader will not be able to tell the user what the button does or where the link is supposed to go. A screen reader is accessibility software that enables translation of text and images on a screen to speech or a Braille display.

Ty Littlefield, a software developer who uses a screen reader, said that he couldn’t identify the search button on the coronavirus website for his state, Massachusetts. He found a button that he thinks might be the search button, but “it just says ‘unlabeled 1.’ ”

Scott Ahern, a spokesperson for the Massachusetts office of technology services and security, said the state builds its websites to comply with WCAG 2.0 AA, the standard for federal government websites, but did not specifically address the coronavirus website.

The Markup’s analysis was based on a list of 50 websites that appear in a Google information module when a user enters a search for the state name and “covid.” We then sent the list, on April 15, 2020, to the web accessibility group WebAIM, which ran an analysis of the homepages using WAVE, a web accessibility tool that flags common problems for blind and low-vision users. We also interviewed two accessibility experts and two screen reader users for insight into issues that could not be detected by WAVE.

WAVE flagged an average of 28.5 errors per coronavirus homepage—which is lower than typical websites, which had an average of 60.9 errors per homepage in WebAIM’s February 2020 analysis of the top million websites. WAVE analysis, which for the Markup survey included only the first page of each site, catches fewer than 40 percent of possible issues, according to WebAIM.

Although the state coronavirus websites were better than most websites, they have a special burden to be accessible, said Jared Smith, associate director at WebAIM.

“People with disabilities are going to be relying on them even more than the commercial news sites,” he said. “Many are in those populations that are at most risk, so this is a very keen topic for most of them. It’s unfortunate that there would be barriers in place for them to reach that information.”

The Americans with Disabilities Act prohibits discrimination against people with disabilities by governments and businesses that are open to the public, in the physical world and online. However, the Department of Justice, which is responsible for enforcing the ADA, has not issued standards for website compliance, despite declaring its intention to do so in 2010.

Disability advocates have been pushing for the Justice Department to adopt the Web Content Accessibility Guidelines developed by the World Wide Web Consortium, which would require specific color contrast ratios, text alternatives to nontext information, keyboard-compatibility, and other features that make a site accessible to users with different physical and cognitive disabilities. But the department formally abandoned the proposed rule under a Trump administration initiative to reduce new government regulation.

For people using screen readers, slide shows and PDFs can be particularly difficult to navigate.

North Carolina’s website includes a slideshow with the number to call for assistance and illustrated symptoms of the disease caused by the virus—but the text is part of the images, making it only accessible visually. Alaska’s website includes links to public health mandates as PDFs, which are difficult for screen readers to parse.

Alaska’s state health agency did not respond to a request for comment.

WAVE’s automated analysis can also miss some major obstacles to users. For example, a large infographic on Washington’s site did not produce errors in WAVE, but Michael Forzano, a blind software engineer who works at Amazon, was unable to parse it using NVDA, a popular screen reader. “I don’t even know that it is a graphic,” he said.

The same information was also available in an accessible table, but the website did not make that explicit—so Forzano wasn’t sure what he was missing.

Forzano was also unable to use the site’s chat bot, another issue that did not register in WAVE.

The site does have an accessibility disclaimer at the bottom—“For people with disabilities, Web documents in other formats are available on request”—but, Forzano said, “we shouldn’t have to contact somebody to get the information that is readily available to everyone else.”

Amy Reynolds, a spokesperson for the Washington department of health, said in an email that they take accessibility seriously and are aware of the issues pointed out by The Markup. They plan to update the site this week to address some of those issues, she said.

Maine and New Mexico were the only states that did not register any errors in the tool.

Jackie Farwell, the communications director for Maine’s department of health, pointed to the state’s accessibility policy and noted the department also uses the WAVE tool internally. “We’ve also worked with stakeholders in the disability community to ensure they have the information they need in the face of the pandemic,” she said in an email.

New Mexico’s coronavirus website was created before the virus was detected in the state, Tripp Stelnicki, director of communications for the governor’s office, said in an email.

“We certainly made a special effort to ensure [the] site—with its myriad resources and information—was as accessible as it could be and we are still working on it,” Stelnicki said. “That’s true for any site we create in light of this pandemic. We have work to do but we’re getting there.”

Multiple states said they value accessibility and will continue to improve their sites, many of which were created quickly. Iowa updated one of its coronavirus websites after an email from The Markup, cutting the number of errors detectable by WAVE in half. “We always want to hear if there are accessibility issues,” Amy McCoy, a spokesperson assigned to the coronavirus response, said in an email.

Hawaii’s department of health created a landing page on the agency’s site, https://health.hawaii.gov/coronavirusdisease2019, which we included in our aggregate analysis. WAVE detected only five errors on that site. However, Hawaii also created a stand-alone website on its own domain, hawaiicovid19.com, which the state has been promoting on social media. WAVE detected 73 errors on hawaiicovid19.com.

Hawaii worked with a third-party vendor, said Janice Okubo, communications director for the state department of health. “We continue to update content and design daily, and the site is undergoing a deep audit now to optimize content and navigation again now that our community is in a new phase of dealing with the disease,” she said in an email. “Accessibility was a key consideration, and we continue to improve the website in real-time daily.”

Much of the information circulating about the pandemic is image-based, including charts, graphs, and maps about the spread, as well as diagrams about proper hand-washing and mask-wearing, in which the text is part of the image, making it unreadable to screen readers.

His frustration inspired him to build an accessible website for tracking COVID-19 stats, which he said prompted a flood of messages from users saying thank you.

“I’ve been doing software development since I was 12,” he said. “A lot of people who are low vision, seniors who have recently gone blind, people who don’t have tech experience—if I’m struggling, I can’t imagine where they’re at.”

This article was originally published on The Markup by Adrianne Jeffries. You can read the original piece here.