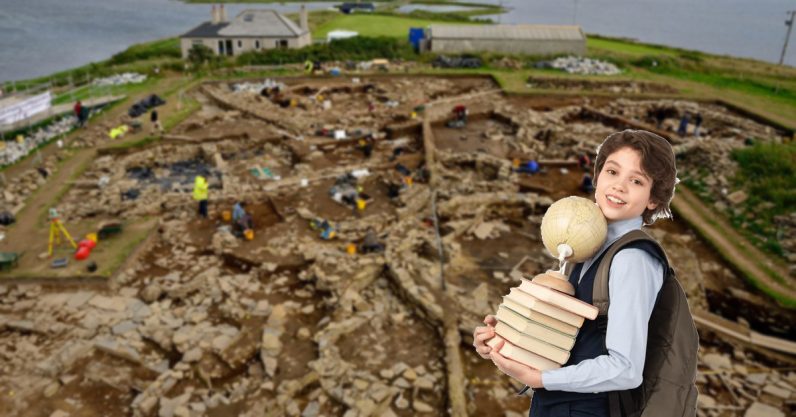 Keig, Aberdeenshire. A gaggle of excited children are instructing community archaeologist Colin Shepherd when to drop a china mug on the floor so that they can see how it breaks on impact.

They will use the results of this experiment to better understand an archaeological find: the broken pieces of an old marmalade jar, last used for breakfast around 100 years ago. The children had recently excavated the jar from woodland in which they usually build dens and play hide and seek as part of an archaeological investigation.

When children are invited to visit archaeological excavations, they rarely have much specific knowledge about the site’s history. Instead, they are usually given simple tasks like washing and sorting finds. What is less usual is to find primary school pupils working as partners with an archaeologist.

Our project lets primary school children take a leading role in an archaeological investigation. This active learning brought benefits to the children by allowing them to interact with their local environment and history in a new way, and to create as well as absorb knowledge. It also forged connections between the wider community and the landscape.

The children’s archaeological investigations were part of a larger project initiated by a community group, the Bailies of Bennachie, which works to study and preserve the landscape of the Bennachie hill region in Aberdeenshire. The main project was developed with a team from the University of Aberdeen and funded by the AHRC Research 4 Community Heritage fund and the Lottery. It focused on the history and archaeology of an abandoned mid-19th-century settlement, located on common ground on the lower slopes of Bennachie.

At one of the schools, the excavation took place in woodland where pupils usually took part in outdoor learning. Until the archaeology project began, the children viewed the woodland as existing only in the present. Through their work, they became aware of its history and the people who lived and worked in the land near their school in the past.

Taking on the role of the historian and working with primary source materials, such as Estate and Ordnance Survey maps, census returns and valuation rolls which record tax payments, the children were able to develop their own lines of inquiry. Their archival work suggested that there had been a water mill in the area, so their excavations set out to find it. The children, working with the community archaeologist, found evidence for this. They also discovered the remains of a 19th-20th century midden, or rubbish dump, containing many sherds of broken pottery.

My role as a teacher educator specializing in history education was to work alongside pupils and staff to create an exhibition for their families and the local community. Following a visit to the university’s museum, the children planned a timeline of finds and a “guess the object” game to engage visitors.

The children were given the use of the museum’s replica of a 17th-century collector’s cabinet for their exhibition. During the identification of the pottery sherds, one was identified as distinctive Seaton Pottery from Aberdeen, so a complete example was borrowed from the museum and included in the cabinet alongside the sherd. By using a high quality and high-status exhibition space, the children’s exhibition gained a similar status to that of a museum for the parents and community members who came to see it.

Not only did the children learn the history of the place, they learned to understand the process of creating historical knowledge. Through their museum visit, they learned how to select items for display and to think about how to tell other people about the history they had created. Setting up the exhibition and showing it to people aided conversations between children and their community.

One of the children discovered that their great grandfather had once owned the Seaton pottery works. The grandmother of another child recounted her memories of making oatmeal brose in a small bowl decorated with the same floral design as a sherd on display.

The archaeological investigations carried out by the children created a real-life context for them to play an active part in learning – educating not just themselves but their community too. By having responsibility for their investigation and exhibition, the children became knowledgeable experts and were recognized as such by adults too.

This article is republished from The Conversation by Elizabeth Curtis, Lecturer, School of Education, University of Aberdeen under a Creative Commons license. Read the original article.

Read next: Scientists are using AI to predict which coronavirus patients need ventilators