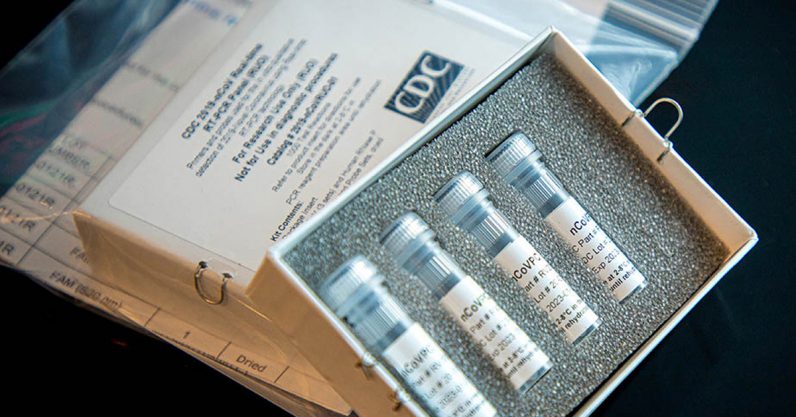 One of the key factors in tackling the spread of COVID-19 across the globe is testing. In South Korea, for example, mass testing has been used to try and quickly identify and isolate those with the disease. Testing is also vital to calculate accurate infection and survival rates – data that is critical for getting public safety measures right. And as this coronavirus continues to spread, people are being offered tests for sale, either at a high price from private clinics – including one for £375, or tests that are not officially approved, or perhaps even fake. So what tests are being used by health officials, how much do they really cost, and what developments are there to come?

What tests are available?

There are two main ways to test for infection with SARS-CoV2 (the coronavirus that causes COVID-19 disease). The first is a very sensitive test that looks for the RNA of the virus using a technique called RT-PCR. This can detect as little as one virus particle in swabs taken from inside the mouth or nose.

The second type of test measures the antibody responses to the virus in blood serum. There are many virus components that our bodies make many different antibodies against. Some antibody is very useful, and kills the virus or stops infection, and some are less useful, binding to common parts of the virus but without helping our defenses.

Read: [Spain plans to use robots to test 80,000 people a day for the coronavirus]

The test itself is very simple: coat a test tube with a virus “mash” or ideally purified virus components, then add a tiny amount of a very diluted blood sample from the patient and let any antibodies bind to the test tube. Finally, develop the test to see if any antibodies are present.

At the start of the outbreak, most countries relied on RT-PCR tests because these were fastest to develop. More antibody tests are now becoming available, which will increase reported cases as gaps are filled. Big differences in the groups being tested still make overall numbers between countries hard to compare. The UK was very quick to develop an RT-PCR test and this remains the primary method, using a network of labs doing the same standardized test. This allows for consistent data but has stretched capacity from the vast scale of the outbreak and the speed of its development.

How good are current COVID-19 tests?

RT-PCR is very specific and sensitive. However, once you have recovered the virus is eliminated and these tests can no longer tell if you’ve been infected. This creates significant uncertainty especially if someone has self-isolated due to mild and unclear symptoms. RT-PCR tests need a laboratory, so it takes time – even if the RT-PCR test itself only takes several hours, by the time you add sample collection, transport, and sample processing it can be days before the result is known. Rapid portable RT-PCR machines are the cutting edge of diagnostic technology, and COVID-19 tests are only just becoming available for these machines – but even the fastest machines take around two hours. These have been evaluated in the NHS to improve flu treatment.

Antibody typically takes a few weeks to develop against a new infection and lasts much longer in the bloodstream than the virus itself, providing a historical picture of past infections. The first studies suggest this is no different with COVID-19. This type of “serology” testing is a powerful tool used to check if vaccines work, for example, or to find out if people have encountered an infection.

However, current antibody tests for the novel coronavirus haven’t fully been tested yet to be sure they are reliable, which is why WHO guidelines recommend RT-PCR testing. Chris Whitty, the UK’s chief medical adviser, said that a test that could reliably detect past infection will be “transformational.” The government recently announced that it had ordered 3.5 million home tests that could soon become available for NHS workers and members of the public once validated. Testing for viral infection hasn’t been widely used in the UK before and these types of tests are not easy to use – the person will have to somehow add a drop of blood to the test – so ultimately they need to also be safe for home use. Saliva-based antibody testing might be possible, but we have even less data than for blood serum.

While the concept of an antibody test is well established, there are challenges in making and using them. Unlike RT-PCR, antibody measurement takes time to refine and needs viral components to be produced that then have to be purified and standardized. In order to check these tests are useful, very carefully collected sets of patient samples are needed.

An antibody test must be checked with many different samples, not only to understand accuracy, but to know how long after infection the sample becomes positive, and how long it stays positive after the patient has recovered. This has to be done with a lot of different patients because every individual generates a unique set of antibodies.

In contrast, the RT-PCR detection can be assessed by taking a known amount of virus and checking the result. The virus has been grown in laboratories since a few weeks after the first UK patients were identified, so we have had an accurate RT-PCR test for some time. But the labor requirements of overburdened centralized laboratories capable of running large numbers of RT-PCR make it relatively slow and expensive.

Rapid tests – that work like pregnancy tests (but detect antiviral antibody instead of pregnancy hormones) – on the other hand, are faster and potentially cheaper but have less accuracy than lab methods.

Instead of a test tube, these tests use specially modified paper. The blood sample flows along with the paper and gives that well-known “one line = negative, two lines = positive” stripes.

Rapid tests are quick to manufacture and easy to use but have to be carefully designed and validated, which is why they are not approved for use and we haven’t seen widespread official use yet. Quality control and validation add significant cost to these tests: an unregulated test can be purchased for less than 50p – and it might even work – compared to a certified rapid test typically costing around £5.

As with vaccines, it’s absolutely vital that any test is accurate and safe, and that takes time and money. Inaccurate tests in the current outbreak could be devastating – imagine if you tested negative, but were infected, and went out and infected more people. Some of these tests have an accuracy of around 80% – this has been intensively studied for many important viral infections such as dengue – which sounds great, except one in five test results is wrong.

The error varies with the disease. For some infections, tests can give you a positive result if you’ve not had the coronavirus, because you have antibodies against something similar. For most of these rapid tests, you can read a negative result just because the line is hard to see.

Even if the test works perfectly in the lab test, without training it’s easy to make an error when using them. Another advantage, then, of lab testing over rapid home tests is improved accuracy. By combining multiple tests, for example against lots of different virus fragments, accuracy can be improved. But this comes at the cost of needing more hands-on time and expert interpretation, not to mention lab equipment.

This contrast between accurate but laborious lab tests vs less accurate but portable rapid tests, is why research groups such as our own at the University of Reading have been working hard to develop novel microbiology and blood testing technology.

One major aim for innovators is to allow multiple laboratory tests to be performed in one small, portable and rapid device. At the same time, increasing the scale of conventional, validated tests, for example by expanding NHS testing capacity, is equally critical to track and trace COVID-19 as the current pandemic develops.

I hope the current urgent need for tests will drive both rapid uptakes of innovative technology, and at the same time boost our capacity to detect microbes and viruses using tried-and-tested laboratory methods.

This article is republished from The Conversation by Alexander Edwards, Associate Professor in Biomedical Technology, University of Reading under a Creative Commons license. Read the original article.

Read next: A year after Inbox's demise, Gmail still doesn't have its best features