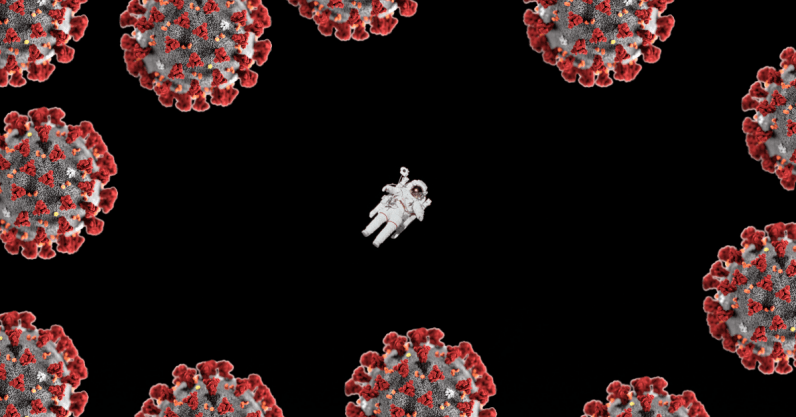 In an effort to mitigate damage from COVID-19 here on Earth, people worldwide are practicing social distancing, attempting to limit the spread of the disease. However, space is extremely tight on space stations, and the first lunar and Martian colonies are also likely to house occupants in close quarters. Disease in space has been affecting astronauts for decades. So, how will we respond to epidemics in space when they inevitably occur.

Since the dawn of the human exploration of space, illnesses and medical emergencies have stricken space travelers. The first missions to space took just a single occupant beyond the bounds of Earth. The number of people traveling on each mission went up to two, then three. Now, four to seven crew members typically take part in each flight, and the International Space Station (ISS) is usually home to six occupants. Lunar and Martian colonies would house hundreds to thousands of people.

Living in space also changes the way bodies react, and alter health under the best circumstances. For this reason, NASA and other space agencies study the effects of space on the human body. Not only will these studies help protect those living in space, but lessons learned from these studies could help protect populations here on Earth.

“Factors like radiation, microgravity, stress, and altered sleep cycles could all affect astronaut immune systems… Understanding these immune system changes may help scientists pinpoint the onset of illness, and suggest monitoring strategies, or treatments, that can boost the immune system and prevent full-blown infections and diseases here on Earth,” NASA officials report.

How viruses — and humans — change in space

The human immune system reacts differently in the microgravity environment of space than it does here on Earth, studies find. The immune system is disrupted, altering the way bodies react to infections.

“The immune system is very complex, and several aspects of immunity remain uninvestigated during spaceflight. We now need to delve deeper into the immune system changes that happen in space, and also determine if immune changes during flight elevate clinical risks for astronauts in future deep-space missions. All the factors that change immunity on the ISS will be worse on longer missions to an asteroid or to Mars,” Dr. Brian Crucian of NASA’s Johnson Space Center (JSC) states.

During the Apollo 7 flight in 1968 (the first Apollo mission to carry astronauts), the crew all came down with colds, altering mission plans. NASA officials believe commander Wally Schirra likely had a mild cold when boarding the spacecraft, before spreading the illness to his crew mates. Due to their illnesses, the crew refused to wear helmets during reentry into the Earth’s atmosphere.

Surprisingly, the crews of the next two Apollo missions also developed colds during their flights. Following these experiences, NASA developed quarantine procedures, limiting human exposure to astronauts prior to their flights.

Since the early days of space travel, advances in communication have made it possible to treat a wider variety of ailments in space, using knowledge and resources on Earth.

NASA was even once able to treat an astronaut who developed a blood clot while visiting the ISS. At the time, the space traveler (whose name is protected for privacy concerns) was two months into a six-month mission when the deep vein thrombosis (DVT) was discovered during a routine test on how space affects the flow of body fluids.

Dr. Stephan Moll, a blood clot expert at the UNC School of Medicine, was called in to help treat the astronaut by teleconferencing.

“My first reaction when NASA reached out to me was to ask if I could visit the International Space Station (ISS) to examine the patient myself. NASA told me they couldn’t get me up to space quickly enough, so I proceeded with the evaluation and treatment process from here in Chapel Hill,” Moll recalls. The NASA video below shows how Dr. Stephan Moll treated a blood clot on the international space station while remaining firmly on terra firma.

Treatment for this condition often involves putting the patient on blood thinners, slowing the growth of the clot, potentially reducing damage caused if the clot breaks free, and travels to another part of the body. However, the ISS is only equipped with a limited supply of medicines, but some Enoxaparin was available, which the astronaut used for 40 days until a supply ship delivered another drug, Apixaban, to the space station crew.

During the course of treatment lasting more than 90 days, the spaceborne patient took regular ultrasounds of their neck, following guidance from a radiology team on Earth. Following a safe landing on Earth, no additional treatments were required for the once-ailing astronaut.

Why space can make you ill

Influenza and microbes like coronavirus could quickly work their way through a crew isolated together in the depths of space.

“The absence of gravity precludes particles settling down, so they stay suspended in the air, and could be more easily transmitted. To prevent this, compartments are ventilated and the air HEPA filters would remove particles,” Jonathan Clark, a former six-time crew surgeon for NASA’s Space Shuttle program, stated.

A 2012 study examining health records of 742 astronauts who flew on 106 flights revealed 29 cases of disease transmission, including fungal, urinary tract, and skin infections, as well as the flu.

Physical changes caused by radiation may present problems keeping astronauts and space colonists healthy. Another challenge for space travelers is that dormant viruses, like herpes simplex, can reawaken during space travel.

Visitors have spent a year or more aboard the International Space Station. Colonists on the Moon or Mars would stay even longer, increasing health issues including sleep deprivation, even without an epidemic. Without proper sleep, and suffering from high stress levels, space travelers could be even more susceptible to infections their bodies may have fought off at home.

“The types of problems you may encounter are a decline in mood, cognition, morale, or interpersonal interaction. You could also develop a sleep disorder because your circadian rhythm might be thrown off due to the 38 extra minutes each day on Mars, or by a small, noisy environment, or the stress of prolonged isolation and confinement,” NASA’s Human Research Program suggests. The video below shows a look at how the human immune reacts to the strange conditions of space.

Astronauts aboard the ISS are regularly tested to ensure once-dormant viruses are not re-activating. Bacteria taken from body swabs of astronauts are regularly examined, revealing populations of bacteria and viruses onboard the space station. Air circulating though the orbiting outpost is safe from both biological and chemical contaminants.

Just as on Earth, isolation and containment of those potentially infected by a disease. The International Space Station is equipped with high-efficiency particulate air (HEPA) filters, and containment masks are available for infected residents of the ISS. Following any sort of infection, space travelers could be quarantined after returning to Earth, as they were in the early days of human space travel.

Future colonies on the Moon or Mars will, almost certainly, have similar facilities for lessening the reach of outbreaks like the one currently engulfing our planet.

Answers to the challenges of epidemics on Earth — much less on lunar or Martian colonies — remains unanswered. And, viruses are more likely to spread, and be harder to treat, in space than they are on Earth.

But, many of the same treatments and procedures that we employ on Earth to limit the spread of disease and to flatten the curve of infections would also likely play significant roles in protecting colonists exploring the Solar System.

As we expand out into the solar system, epidemics are bound to follow us. But, even today, we are already protecting the explorers who are pioneering our quest to reach beyond the confines of our planet.