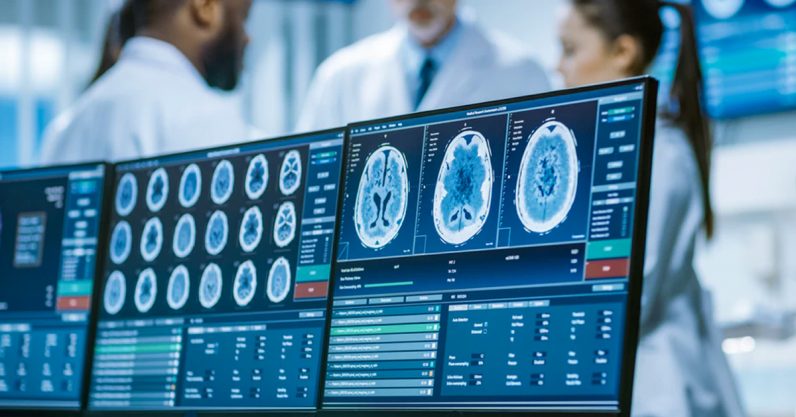 When a person sustains a severe brain injury that leaves them unable to communicate, decisions about their treatment must be made for them. In some cases, these decisions can mean the difference between life and death. But new research may have found a new way of communicating with patients who might otherwise have been unable to.

Researchers asked volunteers with normal brain function to imagine playing a game of tennis, which activates a specific area of the brain used for planning complex movements. Researchers were able to see the brain activity using functional near-infrared spectroscopy (fNIRS), which is a headset that, when placed on a patient’s head, uses beams of light to detect which areas of the brain are active.

Volunteers were then told to imagine playing tennis to answer “yes” or to stay relaxed to answer “no.” If researchers saw activity in the brain’s supplementary motor area, they knew the person was responding “yes.” This breakthrough could potentially give patients with severe brain damage the ability to communicate with doctors and family members – and could potentially transform how treatment decisions are made.

For example, if families can’t communicate with their loved ones, they may feel pressure to make treatment decisions quickly to avoid leaving them “trapped” in a severely disabled state. Research has shown that 50% of families who withdraw treatment do so within the first 72 hours of patient admission to the hospital. This means that some patients who could have made a good recovery die. Communication could allow patients to convey what treatment they want early on.

Read: [This startup is building a brain-reading device to take on Elon Musk’s Neuralink]

This new research is a significant step forward from foundational neuroimaging studies developed over the last decade. In these early studies, severely brain-injured patients thought to be unconscious were placed in a functional magnetic resonance imaging scanner (fMRI), and asked to imagine playing tennis, or navigating their homes. By imagining these specific scenarios, patients could show they were conscious. Several studies have shown that almost 15% of patients thought to be in a persistent vegetative state – defined by a complete lack of awareness of the self or environment – are actually conscious, based on brain activity shown during scans.

However, many severely brain-injured patients cannot be scanned using fMRI, leaving them no way to communicate. By adapting the tennis task to fNIRS, researchers can safely and easily scan patients at the bedside, potentially meaning a greater number of patients could communicate with researchers at a time when important treatment decisions are being made.

Though this method could ultimately allow patients to choose their own treatment, there are at least two conditions that must be met before fNIRS can be ethically applied in this way.

First, researchers need to ensure they’re interpreting a patient’s brain responses correctly. In the study, the researchers were correctly able to identify in volunteers without brain injury 79% of “yes” responses and 71% of “no” responses. But if we plan to administer treatment (or not) based on a patient’s response, how sure do we need to be that a patient has responded “yes” rather than “no?”

Second, we need to be sure that the patient has the capacity to make the decision we’re asking them to make. We usually assume that otherwise healthy adults can make their own medical decisions. But a patient with dementia might have to demonstrate their ability to a doctor by showing they understand the decision and its consequences, and can communicate this understanding. But severe brain injuries can cause cognitive deficits – giving us reason to be skeptical of a patient’s decision-making ability, especially complex decisions about life-sustaining treatment.

Of course, a patient could have the capacity to decide to end their life. Patients have the right to refuse treatment, even if this is likely to result in their death. For example, a patient with terminal cancer may refuse chemotherapy. In some countries, patients can be actively assisted by physicians in ending their own lives.

But asking a severely brain-injured patient to decide about life-sustaining treatment is different. In the cancer case, the patient’s diagnosis may be sudden, but death from cancer may not be imminent – giving them time to think about what treatment is best for them. In the assisted dying case, the patient’s death is imminent, but not sudden. They will have had time to reflect on their decision. But a severe brain injury is sudden, and death will be imminent without treatment.

It’s difficult to imagine a patient being able to understand and appreciate the consequences of a life-or-death decision given these circumstances. They may be in severe pain or distress, which may impair their ability to weigh their present suffering against the potential for recovery in the future. Research also suggests that people tend to overestimate how much worse off their lives would be with a severe disability. A patient that initially views the life of severe disability as worse than death may see things differently once they adjust to their circumstances.

However, using fNIRS to communicate with patients could still be incredibly useful for assessing a patient’s experiences, allowing them to report on symptoms, and express wishes or preferences. Even without the ability to make decisions, people can still have values, desires , and preferences that affect their quality of life, and we don’t need to presume decision-making capacity to take these preferences and wishes seriously.

This article is republished from The Conversation by Mackenzie Graham, Research Fellow of Philosophy, University of Oxford under a Creative Commons license. Read the original article.

Read next: UK gets its first fully electric avenue to charge EVs on the street