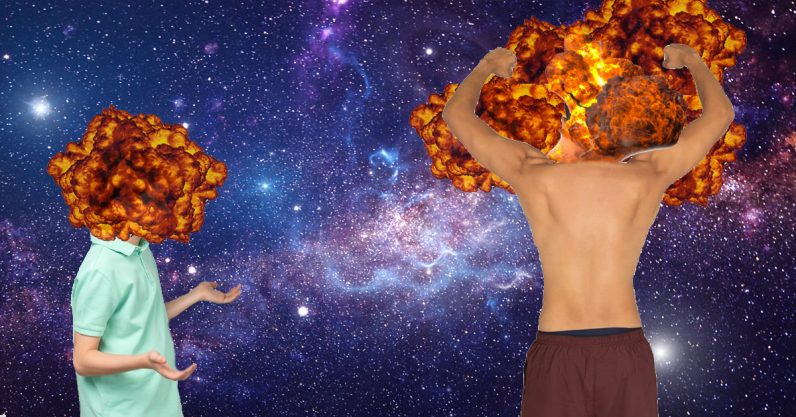 The largest explosion ever seen in the history of the Universe ripped through a plasma cloud hundreds of millions of years ago, creating the most powerful explosion seen by astronomers since the Big Bang, a new study reveals.

The eruption, centered on a supermassive black hole (SMBH) in the Ophiuchus galaxy cluster (roughly 390 million light-years from Earth) produced energetic jets, ripping a mammoth hole, 15 times larger than the Milky Way Galaxy, in the cloud of plasma surrounding the galactic cluster.

“We’ve seen outbursts in the centers of galaxies before but this one is really, really massive. And we don’t know why it’s so big. But it happened very slowly — like an explosion in slow motion that took place over hundreds of millions of years,” Melanie Johnston-Hollitt of the International Centre for Radio Astronomy Research (ICRAR) stated.

Read: [Why this 2019 Nobel physics winner says we should stop calling it a ‘Big Bang’]

Every major galaxy houses a supermassive black hole near its center, and powerful eruptions have been seen before around these enigmatic objects, but not like the one recently found in this new study.

This was the largest explosion known in the Universe, five times as powerful as a similar event in the galaxy cluster MS 0735+74, the previous record-holder. This smaller event would have required the SMBH there to consume 300 solar masses of material over the course of 100 million years, Chandra X-Ray observatory officials calculate. However, even those incredible figures are dwarfed by the eruption at the center of this new study.

“We found that the X-ray structure is, in fact, a giant cavity in the X-ray gas filled with diffuse radio emission with an extraordinarily steep radio spectrum. It thus appears to be a very aged fossil of the most powerful AGN outburst seen in any galaxy cluster,” researchers describe in an article published in The Astrophysical Journal.

Black holes are best-known for drawing matter in toward their centers through their massive gravitational field. However, these bizarre objects can also redirect matter falling toward them into powerful jets that race away from the region surrounding the black hole, deep into space.

“What is special about this example is that it’s one of the cases where we are looking at a host galaxy embedded in a galaxy cluster and the jets have carved out an enormous cavity in the hot X-ray plasma that fills the cluster. There are about 50 of these cavities known, which might seem like a lot, but given the enormous number of AGN in the Universe, that’s actually not many, and the example in Ophiuchus is the most energetic,” professor Johnston-Hollitt told The Cosmic Companion.

There’s no crater cause

Astronomers utilizing X-ray telescopes had seen this gaseous crater before but rejected the idea that the feature could be the result of an explosion due to the behemoth size of the crater.

Using NASA’s Chandra X-ray Observatory, the XMM-Newton from the European Space Agency, the Giant Metrewave Radio Telescope (GMRT) in India, and the Murchison Widefield Array (MWA) in Western Australia to examine the artifact in radio waves, astronomers realized that what they were looking at was, indeed, the product of an explosion of unfathomable proportions.

“The radio data fit inside the X-rays like a hand in a glove. This is the clincher that tells us an eruption of unprecedented size occurred here,” said Maxim Markevitch of NASA’s Goddard Space Flight Center.

Major eruptions in galaxies can release vast amounts of energy, but a majority of solar systems in the vicinity of such an event would escape direct impact from such an event, unless they were in the path of one of the powerful jets produced during an explosion.

“If you happen to be in the way of one of these radio jets, you’d be blasted with highly energetic particles and strong magnetic fields. However, when the emission starts deep within the galaxy it’s actually very narrow and so it wouldn’t hit too many things. The jets broaden as the move away from the black hole and outside of the host galaxy,” Johnston-Hollitt explained.

Energy from this eruption has now subsided as the gas feeding the SMBH at the center of the explosions has (likely) moved away from its home galaxy. The gas may have been lost from the force of the explosion, like wine spilling from a glass when it is shaken, astronomers speculate. No signs of further activity are seen by radio astronomers, suggesting the eruption has now ceased.

Several mysteries still remain about how the event changed this cluster of galaxies. For instance, why does this object only show one area of radio emission, while other (smaller) events of this type show two such locales? One possibility is that gas one the other pole of the eruption may have been thinner than its partner, dissipating more rapidly than the remnant we see today, but the answer calls for further research.

As in an explosion, I would erupt with all the wonderful things I saw and understood in this world. — Boris Pasternak

Future instruments may show us new, even more powerful, events like the one seen in Ophiuchus.

“This is the most energetic event like this yet detected. It happens to be in a cluster that is relatively close and so is in some sense easier to detect with current telescopes… as we get more powerful low-frequency radio telescopes we may indeed see larger and more energetic events,” Johnston-Hollitt describes.

As telescopes and instrument scour the skies in the coming years, we just may find evidence for even more powerful eruptions in the distant past. But, at least for now, this is the most powerful explosion we know of in the history of the Universe.