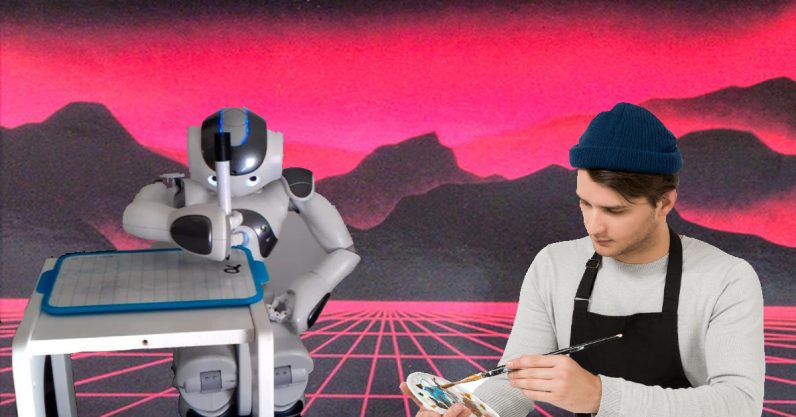 The European Patent Office recently turned down an application for a patent that described a food container. This was not because the invention was not novel or useful, but because it was created by artificial intelligence (AI). By law, inventors need to be actual people. This isn’t the first invention by AI – machines have produced innovations ranging from scientific papers and books to new materials and music.

That said, being creative is clearly one of the most remarkable human traits. Without it, there would be no poetry, no internet, and no space travel. But could AI ever match or even surpass us? Let’s have a look at the research.

How does the discriminator know what a human looks like? Well, you feed it many examples of pictures of a real person before you start the task. Based on the feedback of the discriminator, the generator improves its algorithm and suggests a new picture. This process goes on and on until the discriminator decides that the pictures look close enough to the picture examples it has learned. These generated pictures come extremely close to real people.

But even if machines can create innovations from data, this does not mean that they are likely to steal all the spark of human creativity any time soon. Innovation is a problem-solving process – for innovation to happen, problems are combined with solutions. Humans can go either direction – they start with a problem and solve it, or they take a solution and try to find new problems for it.

An example of the latter type of innovation is the Post-it note. An engineer developed an adhesive that was much too weak and was sitting on his desk. Only later a colleague realized that this solution could help prevent his notes from falling out of his scores during choir practice.

Using data as an input and code as explicit problem formulation, machines can also provide solutions to problems. Problem finding, however, is hard for machines, as problems are often out of the boundaries of the data pool that machines innovate upon.

What’s more, innovation is often based on needs we didn’t even know we had. Think of the Walkman. Even if no consumer ever uttered the wish to listen to music while walking, this innovation was a huge success. As such latent needs are hard to formulate and make explicit, they are also unlikely to find their way into the data pool that machines need for innovation.

Humans and machines also have different raw materials that they use as input for innovation. Where humans draw on a lifetime of broad experiences to create ideas from, machines are largely restricted to the data we feed them. Machines can quickly generate countless incremental innovations in forms of new versions based on the input data. Breakthrough innovation, however, is unlikely to come out of machines as it is often based on connecting fields that are distant or unconnected to each other. Think of the invention of the snowboard, which connects the worlds of skiing and surfing.

Also, creativity isn’t just about novelty, it is also about usefulness. While machines are clearly able to create something that is incrementally new, this does not mean that these creations are useful. Usefulness is defined in the eye of those potentially using innovations and it is hard to judge for machines. Humans, however, can empathize with other humans and understand their needs better.

Finally, creative ideas generated by AI may be less preferred by consumers simply because they have been created by a machine. Humans might discount ideas from AI since they feel these ideas are less authentic or even threatening. Or they might simply prefer ideas of their kind, an effect that has been observed in other fields before.

As of now, many aspects of creativity remain uncontested terrain for machines and AI. However, there are disclaimers. Even if machines cannot replace humans in the creative domain, they are a great help to complement human creativity. For example, we can ask new questions or identify new problems that we solve in combination with machine learning.

In addition, our analysis is based on the fact that machines mostly innovate on narrow datasets. AI could become much more creative if it could combine big, rich, and otherwise disconnected data.

Read next: EV startup Nikola takes on the Tesla Cybertruck with hydrogen-powered 'Badger'