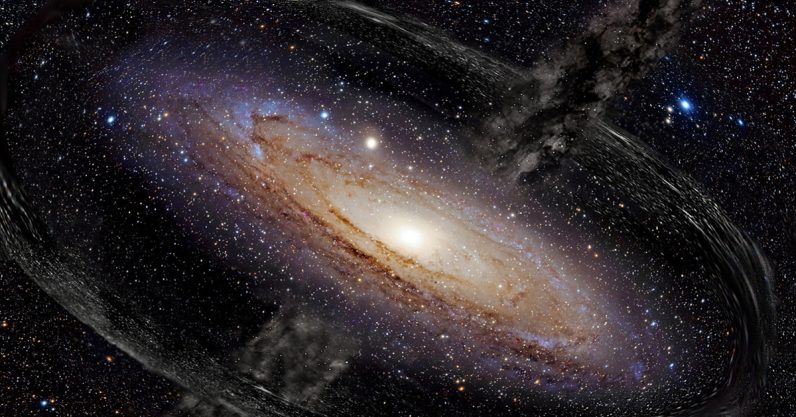 Afaint glow of gamma radiation — the unresolved gamma-ray background — fills the sky. This energy is not evenly distributed, as this light (much more energetic than can be seen by the human eye) is concentrated where the greatest amount of matter is found in the early Universe, while regions containing less matter exhibit lower emissions of radiation.

This correlation between matter and the unresolved gamma-ray background, could help astrophysicists better understand the nature of dark matter, a new study suggests.

The energy which makes up this background radiation comes from sources so far away from us that they cannot be resolved by astronomers. However, the fact that this radiation is concentrated in the same regions which were densely packed with matter in the early universe could provide a tantalizing clue to its nature.

“The background is the sum of a lot of things ‘out there’ that produce gamma rays. Having been able to measure for the first time its correlation with gravitational lensing — tiny distortions of images of far galaxies produced by the distribution of matter — helps us disentangle them,” said Simone Ammazzalorso from the University of Turin and the National Institute for Nuclear Physics (INFN) in Italy.

Two eyes are better than one…

This new study examined nine years of data from the Fermi Gamma-ray Space Telescope, as well as one year of observations from the Dark Energy Survey. The team used gravitational lensing — the bending of light from distant objects by gravity — to probe the distant regions of space.

Although researchers expected to find some correlation between matter distribution and the gamma radiation background, the data revealed a different relationship than predicted.

“This could mean that we either need to adjust our existing models for objects that emit gamma rays, or it could hint at other sources, such as dark matter,” said Daniel Gruen of the Kavli Institute for Particle Astrophysics and Cosmology (KIPAC).

Gamma radiation carries the greatest amount of energy of any frequency of electromagnetic radiation. It is produced by the most powerful events in the Cosmos, including the cores of stars, and the innermost rims of galaxies, as matter plummets toward inevitable doom.

Certainly, massive events like these in the early universe could have produced some of the radiation we see today. Another possibility is that as particles of dark matter collided at this time, these events produced the observed gamma radiation. Below is a video from Hubble ESA showing a simulation of the Hubble Space Telescope examining the effects of dark matter in a cluster of galaxies.

Another possibility is that this energetic radiation is the product of blazars — active galaxies with supermassive black holes at their centers, devouring massive quantities of matter. This is the simplest explanation for the data, but there remains a problem with this explanation.

“[O]ur models for emissions from blazars can fairly well explain the low-energy part of the correlation, but we see deviations for high-energy gamma rays. This can mean several things: It could indicate that we need to improve our models for blazars or that the gamma rays could come from other sources,” Gruen said.

Although dark matter makes up 80 percent of all matter in the Universe, astrophysicists are still puzzled about its nature. We can see its gravitational influence, but it does not give off light or other electromagnetic radiation.

One theory holds that dark matter consists of WIMP’s (Weakly Interacting Massive Particles). When these theoretical particles collide, they would explode in bursts of gamma radiation. However, until researchers conclusively prove or disprove the existence of WIMP’s, this theory concerning the nature of the mysterious gamma radiation remains unproven.

As new instruments go online in the coming years, astronomers will continue to learn more about the nature of dark matter, dark energy, and the faint, unexplained glow of gamma radiation, reaching to us still from the early Universe.

Analysis of the study was published in Physical Review Letters.