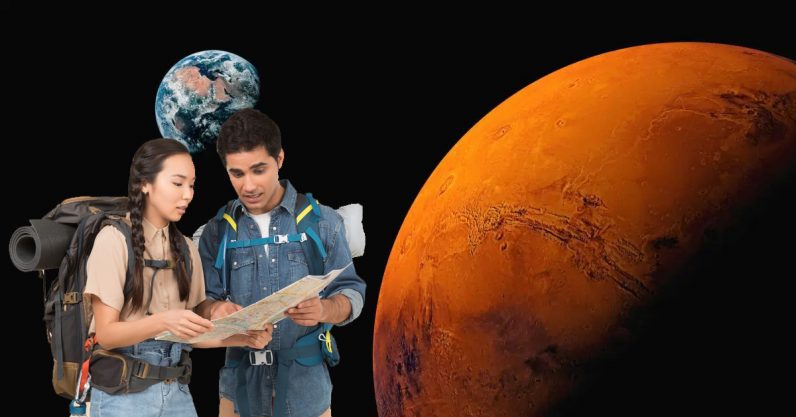 In a rare instance of environmental success, the United Nations has just announced it believes the damage to the Earth’s protective ozone layer will be fully restored by the year 2050. This stands in stark contrast to the increasing alarm over the climate emergency, caused by an increasing greenhouse effect.

Both the ozone layer and the greenhouse effect ultimately help control how much ultraviolet (UV) radiation from the sun reaches the Earth’s surface, and how much infrared (IR) radiation escapes to space. Both these forms of radiation have a critical impact on the habitability of a rocket planet.

Clearly controlling this radiation is a pressing issue on Earth. But it also presents a challenge for those who dream of colonizing Mars.

Ultraviolet radiation is a form of light which has a wavelength ranging from 10 – 400 nanometers (1nm is 0.000000001 meters in length). This is shorter and more energetic than visible light. By contrast, the wavelength of a typical 4G phone network is a few tens of centimeters.

Solar UV can drive the production of the essential Vitamin D in human skin, but excess levels can cause an array of health problems including sunburn, skin cancer and cataracts. It can also damage plants and harm crop production.

On Earth, almost all solar UV is absorbed by the ozone layer, a region of the Earth’s atmosphere extending from about 15–30km in altitude. Without it, life on Earth would be in a lot of trouble.

Ozone is a naturally occurring molecule consisting of three oxygen atoms. The formation of this molecule is carefully balanced by a process called the Chapman cycle, in which ultraviolet light breaks the ozone down into a single oxygen atom and an oxygen molecule. Natural factors can act as catalysts for this such as volcanic activity and the Earths radiation belts.

The first observations that the ozone balance was in trouble were made in the 1980s. It was determined that the widespread use and emission of certain chemicals like chloroflourocarbons had caused severe damage to the ozone layer.

This prompted the international community to adopt the Montreal Protocol in 1987 – so far the only UN agreement ever ratified by every member state.

IR radiation has a subtly different effect on Earth and other planets. All objects emit a range of light depending on their temperature. An object at an average temperature of a million degrees would primarily emit x-rays (as some star systems do).

The sun, at an average temperature of 5,700°C, emits most strongly in visible light (specifically in yellow), while objects at room temperature emit in IR. This is why people show up clearly in an infrared camera.

Sunlight, primarily at visible wavelengths, passes through the atmosphere and warms the Earth’s surface. To maintain thermal equilibrium, the Earth then emits light back into space, but it does so in IR. Certain molecules in the atmosphere let a large amount of visible light pass through (which is why they are invisible to the human eye) but reflect back or scatter the IR light emitted by the surface – making the surface warmer.

The chemicals involved in this process are what we know as greenhouse gases, the most commonly known is carbon dioxide, but methane and nitrous oxide are also important. What complicates the climate issue is that water vapor and ozone itself are all greenhouse gases too.

This is one of the many factors that make climate modeling a very complex topic. The greenhouse effect itself is usually described as a bad thing, but it is actually essential to life. Without any greenhouse effect, it is relatively easy to show that the Earth would be at an average temperature of -24°C, instead of our current 14°C.

Like many natural processes though, human activity has modified the greenhouse effect such that this essential feature of our planet’s habitability is now becoming dangerous. We have ample evidence that humans have increased the amount of greenhouse gases in the atmosphere, and as a result, the global average temperature.

The challenge for future colonists hoping to live on Mars is quite the reverse of that on Earth. Its thin atmosphere means that even though there is a large concentration of carbon dioxide, the greenhouse effect is quite weak and needs to be boosted. But a recent study has shown that even if the remaining carbon dioxide in rocks on Mars was vaporized and put into the atmosphere, there would not be enough of it to generate a sufficient greenhouse effect to make the planet warm enough to live on.

Compared with Earth, there is also very little ozone on Mars, and the thin Martian atmosphere allows much more solar UV to reach the surface. So intense is this radiation that the top few centimeters of Martian soil are essentially sterilized once a day, with any complex molecules that might be useful for life being destroyed.

So what could we do to make the climate more similar to Earth’s? Previous ideas have included installing a giant magnet in space near Mars to protect the atmosphere and firing nuclear weapons at the surface.

A recent paper suggests we could use silica aerogel – a synthetic and ultralight material made by taking a gel and replacing the liquid component with a gas – to cover regions of the surface. This would in effect function as an artificial ozone layer, being almost transparent in visible light but blocking UV.

The use of silica aerogel would also rapidly heat up the ground underneath it to above the freezing point of water by way of an artificial greenhouse effect. Placing silica aerogel shields over ice-rich areas of the surface would generate an environment suitable for plant growth, with minimal human intervention.

This alone cannot terraform the red planet, as the Martian atmosphere is constantly being lost to the solar wind. However, it would at least provide a much less hostile environment, on a smaller scale, for future visitors. While still a difficult prospect, this is currently the most practical way of making areas of Mars a less extreme environment.

This article is republished from The Conversation by Gareth Dorrian, University of Birmingham and Ian Whittaker, Nottingham Trent University, under a Creative Commons license. Read the original article.