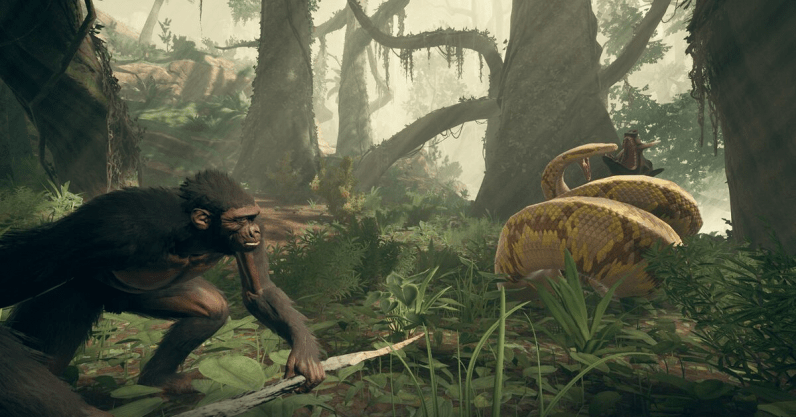 As an academic scientist who researches human evolution, I was surprised to receive an email one day from Patrice Désilets, a top computer game designer responsible for the first two Assassin’s Creed games. He was working on a new game based on our early evolution in Africa, he said, and was using my book The Cradle of Humanity as one of the key reference texts. Would I like to be involved?

Patrice invited my family to Montreal in early 2018 to play and comment on an early beta version. He was greatly amused that my youngest daughter is a true gamer while I always toggle the wrong way (I’m sorry but … up should mean up). But despite my dodgy controlling, I enjoyed a stunning game with a unique subject matter, and one which I believe offers some key insights into human evolution.

The newly released Ancestors: The Humankind Odyssey is an open world survival game where you control a group of “hominins” – our first ancestors – and explore, expand, and lock in new knowledge so your “clan” can evolve. It takes the players from 10m years ago, and the common ancestor of both chimpanzee and hominins, to 2m years ago, when you can play as an early version of Homo erectus. The aim of the game is ultimately to evolve to the point when humans began to leave Africa.

My own research has shown how climate changes in Africa prompted waves of human evolution, so I was delighted to see the landscape in the game is particularly detailed. From the dense forest where our ancestors originated to the drier open plains you can almost smell Africa. The game also shows us how dangerous life would have been because everything wants to kill you – whether it is leopards, giant snakes, eagles, crocodiles, hippos, hyenas, or a poisonous plant you try to eat.

Even today, on safari or doing fieldwork, in these parts of Africa you can feel the continual threat of the environment around you. This is because humans are really weak when compared with other animals: we are not particularly fast and we have no natural weapons. Teamwork and technology are what allow us to thrive today, and the game tracks the start of our evolution from prey to the world’s apex predator.

This is where the novelty of the game comes in. For instance, it has a very cool mechanism of locking new knowledge into your synapses. All your exploring and encounters give you experiences that can be made into new skills – evolutionary changes such as tool making and team work, both essential to deal with nasty predators. But these new skills can only be locked into your clan’s “DNA” if you complete the task with a baby or an infant with you, which mimics the passing of knowledge between generations.

Some early reviewers have complained it is hard to understand how to evolve. There are minimal instructions, the game is not linear, players are driven by their own curiosity, and different players will prioritize different skills and abilities. For example you can “win” the game and leave Africa without ever evolving to walk upright if you decide to prioritize other skills. But again, this is just like real life evolution, which has no direction and is driven by random events and encounters.

However, there are already excellent walkthroughs available online so, to some extent, this gaming issue has been sidestepped by a unique human characteristic – teaching – and an innovation that came much more recently: language. But I really hope most players use these sparingly, as the joy of the game comes from discovering new things for yourself.

One major reviewer complaint is that if your clan dies you lose everything – unlike many other computer games, there is no reboot. Patrice again put this in because it is exactly like reality. Evolution is full of dead-ends and new species which simply died out, such as the diminutive Homo nadedi in South Africa or Homo floresiensis in Indonesia, or the Neanderthals who only survive in European and Asian DNA due to briefly interbreeding with Homo sapiens as we emerged from Africa.

For me, Ancestors provides a new and novel way of envisaging the past landscapes of Africa which our ancestors had to survive and thrive within. It portrays the danger of that landscape and how key attributes such as tool making and team work helped us cease to be prey and to become a feared predator that regularly took down giant mammoth after leaving Africa. It also provides a unique way of engaging a totally different audience in the excitement and intrigue of human evolution.

For those of us who research early human evolution, this is an exciting moment, a game that illustrates all our research that anyone can play. I’m now looking forward to Ancestors 2, as once proto-humans have left Africa the real fun begins.

Read next: Satoshi Nakaboto: ‘Top 1000 Bitcoin addresses own 34% of the total supply’