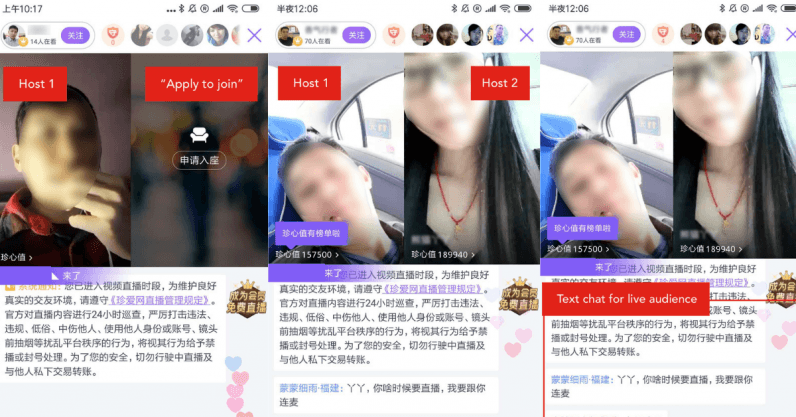 Back in January, industry powerhouse Shijijiayuan 世纪佳园 launched a streaming video feature meant to facilitate live conversation between multiple participants, a sort of talk show where app users are both the hosts and the audience.

Confused? We’re not surprised. There’s nothing like it in the western app space, so here’s a quick breakdown of the feature flow:

1. “James” opens a chat room and sets a topic, and in turn, automatically becomes the room’s first host. He waits for another person to join as the second host.

2. “Jessica” sees that James’ chat room needs a host, and thinks James is cute, so she applies to host with him.

3. James accepts Jessica’s host application, and Jessica becomes the show’s second host. James and Jessica talk to each other, and their conversation is broadcast publicly across the app.

4. Any number of other users can browse a list of all live streams. Those other users can then listen in. While they’re listening, they can use a text chat window to communicate with each other, and with the hosts.

5. If any other user likes James or Jessica, they can contact them privately, or even offer them virtual gifts. So while James and Jessica are courting each other, they’re also showing off their stuff for the rest of the room.

The idea was interesting in theory, but in practice, it turned out to be a little half-baked. The design team noticed several problems:

Shijijiayuan countered with a four-pronged solution :

The solutions seem to be working: the three top players in the game, Zhenai 珍爱, Baihehunlian 百合婚恋, and Shijijiayuan 世纪佳园, have rolled out various versions of these features. Shijijiayuan reports that its live-streaming users stay an average of five minutes longer (from an average of 30 minutes to an average of 35) in the app during each use.

We’re gonna go out on a limb here and say the thought of live-streaming one’s total lack of game probably strikes dread into the heart of Western audiences. Yikes, right?

Not yikes, though. If you’re a Chinese dater, not yikes at all. And in terms of user experience, it makes a ton of sense.

Skeuomorphism is a term most often used in graphical user interface design to describe interface objects that mimic their real-world counterparts in how they appear and/or how the user can interact with them. A well-known example is the recycle bin icon used for discarding files. Skeuomorphism makes interface objects familiar to users by using concepts they recognize.

In other words, good interfaces imitate real life. In real life, Chinese daters are comfortable feeling each other out in large groups of friends. In real life, karaoke is a big part of socializing in China. In real life, third-party matchmaking has been around for a few thousand years and is still very much a thing.

Our use of “skeuomorphism” here isn’t quite perfect. The term usually refers to a link between a real-world object and a virtual object; we’re describing a link between a set of cultural behaviors and a set of virtual behaviors. But the parallels illustrate the issues foreign app developers run up against when trying to launch in the China market: Culturally, they don’t know what they don’t know. Most non-local firms don’t have a deep enough understanding of the social landscape to respond to user needs, much less to churn out innovative features.

This is a significant barrier to market entry, and one businesses will have to tackle to have any hope of success with a China push.