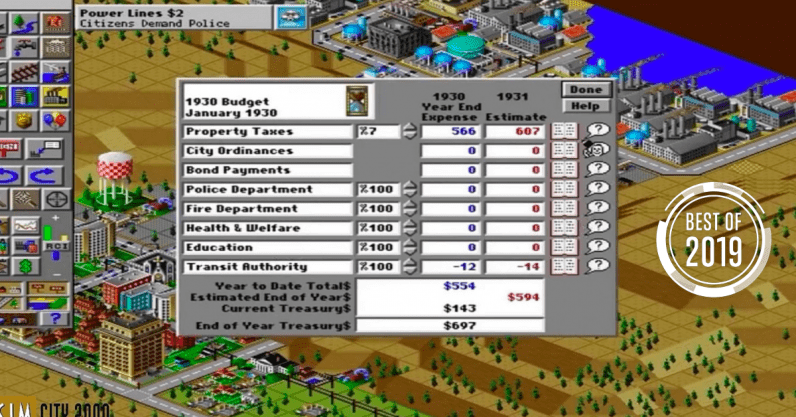 Civilization VI, a game I like, has a new expansion pack out. It’s a strategy game series I’ve been playing since 1994 or so, and every Civ is a kind of simulation of how the world works. That’s what this piece is about: simulating systems. Specifically, what gets simulated, and what doesn’t.

Every kind of game, regardless of genre, is a simulation of something. Bullets fly through the air and interact with bodies in specifically designed ways; Mario jumps and flips in accordance with simulacra of gravity and plasticity. In a game like Civilization, the player uses macro and micro simulations of different real-world systems for organizing human society (trade, warfare, technological research, geography, diplomacy, culture, religion, etc.), taking a small Stone Age tribe and growing it into a globe-spanning superpower.

This latest expansion pack — “Gathering Storm” — introduces climate change into that list of systems, and it does so in a couple of interesting ways. Firstly: the sea level rises with CO2 emissions, so the world map doesn’t stay the world map. Secondly: if your civilization is wealthy enough, you can build sea defenses and hold out against the riding tide.

These two systems interact in a third way: civilizations that are wealthy enough to mass-build sea walls will be the wealthier and more powerful, and that wealth and power will come from having burned more fossil fuels in earlier in the game. It’s a model of the apparent trajectory of our real planet — whatever the nightmare waiting for us, those who burned the most are also in the best position to afford the transition to living behind dikes and beneath climate-controlled domes.

Is this fair? In the sense that this is “just” a game, well, kind of. The first entry in the Civilization series was released in 1991, and it became the ur-example of the so-called “4X” game genre: eXplore, eXpand, eXploit, eXterminate. These are, give or take, still the guiding principles for the most complex strategy games available today — games that are, for tens of millions of people, likely to be the most sophisticated systems and models of reality that they’ll ever get their hands on. Different developers emphasize different systems depending on what they want to offer as a gameplay experience, but the four basic elements can be seen across all of the bigger game series like Europa Universalis or Anno or Total War.

The other genre-defining “systems” game relevant here was released a couple of years before Civilization—1989’s SimCity. The most-told story of its creation is that game designer Will Wright was building levels for a forgettable mid-80s helicopter attack game called Raid on Bungeling Bay; he enjoyed making the levels so much more than destroying them that he span it out into one of the most popular game franchises of all time.

However, as Kevin T. Baker explores in a fascinating piece for Logic, there was another crucially important influence on Wright that guided how he overlaid governance, economics, infrastructure, and more, on top of his sandbox. It was a 1969 book, Urban Dynamics, written by Jay Forrester.

Forrester worked on radar systems for the U.S. Navy during WW2, then spent the next decade leading design on some of the earliest electronic computers. In the mid-1950s, he left for MIT, founding the field of systems dynamics, a multi-disciplinary approach that uses computers to simulate interlocking feedback loops in things like industrial production. (It has a lot of overlap with cybernetics.) After meeting with former Boston mayor John F. Collins and hearing about the challenges of city governance, Forrester sought to simulate the contemporary U.S. metropolis — and he spent six months reducing it down to a set of 150 different equations. Baker writes:

“The city inside Forrester’s model was a highly abstracted one. There were no neighborhoods, no parks, no roads, no suburbs, and no racial or ethnic conflicts. (In fact, the people inside the model didn’t belong to racial, ethnic, or gender categories at all.) Economic and political life in the outside world had no effect on the simulated city. To the extent that the world outside the model existed, it served only as a source for migrants into the city, and a place for them to flee to if the city became inhospitable. … [T]he urban poor served as a massive drag on the health of the simulated city: they did not add to its economic life, they had large families which strained public services, and they contributed only paltry amounts to the city’s coffers.”

Every simulation reflects a choice to simplify — to ignore parts of the world deemed less important. Forrester said that people should be careful when using his model for guidance, but he still used what the model spat out as a justification for critiquing or praising actual political policy, like building and maintaining low-income housing.

Republican politicians loved the scientific credence that Forrester’s models gave their own arguments for cutting government budgets and programs during the era of white flight and urban decay. The model and the politics themselves became their own kind of self-justifying feedback loop, an example of how technocratic “evidence-based” policymaking is never actually neutral or non-ideological.

Even as Forrester’s equations fell out of fashion and became less directly influential, they survived in SimCity two decades later, a game in which, as many people have pointed out, you can’t raise taxes higher than 20 percent.

It’s been used to introduce generations of students to urban planning issues, and many millions more have had their understanding of cities shaped by this game series, myself included. And, while it lacks any kind of explicit conflict or warfare, 4X games like Civilization that came later were subsequently inspired to model the world in the same way.

You can’t avoid simplifications and abstractions when it comes to simulations; even the most powerful supercomputers struggle with real-scale city simulations. But the question I ask myself, as I look over my collection of games that focus on power grids and pollution and traffic flows, is why do these games care so little about the humans in these systems?

It’s striking how, even in games as anti-adversarial as the SimCity series, the pursuit of realism rarely focuses on community life. (And there’s a further irony here, in that Will Wright was nearly blocked from pursuing the idea for what would become his biggest hit — the interpersonal simulation blockbuster The Sims — by his bosses because “doll houses were for girls, and girls didn’t play video games.”)

You can win Civ VI by being nice to the other players and having them vote you world leader, but it’s a lot easier to live and win by the sword (and the sea wall). When SimCity makes it seem natural to incentivize businesses with tax breaks, you’re going to sacrifice your healthcare and your schools for the “greater good.” And why not? They’re not really people.

They’re not really real. The simulations in these games tend to downplay intimacy, love, anger, and other hard-to-quantify states of being; they’re lost somewhere deep beneath the top-level perspective of “trade” or “war” or “climate.” In the process of creating the simulation and making the simplifications, the possibility of accounting for something like empathy is often the first to be sacrificed.

Rather than write off simulations (and games that simulate) as fundamentally flawed, I think it’s better to consider this a particularly intriguing game design challenge. You can also, alternatively, play these games in a way that actively attempts to subvert the assumptions that went into them. YouTuber donoteat01, for example, uses Cities: Skylines (a spiritual successor to SimCity) to teach his audience about urban planning issues (and recruit for the Wobblies). Take this video critique of urban freeways.

He lays out the reasons they became popular in the mid-20th century across the U.S., explaining the systemic power imbalances that meant poorer and less-white communities were the ones displaced by their construction. And then he does what you’re absolutely not meant to do in this kind of game: he treats every single home that’s demolished as a home. He uses the mechanics of the game to highlight its own biases, where it prioritizes top-level efficiency over grassroots community.

Many developers have tried to find ways of simulating the world that make cooperation as compelling as competition, if not more so. The hugely popular Crusader Kings 2 mashes up Sims-like interpersonal relationships with feudal-era European geopolitics to incredible, Game of Thrones-esque effect. (There’s nothing quite like being usurped from your ducal title by the grandson of the prince your father deposed, who also happens to be a horse.)

Or there’s the upcoming indie cyberpunk survival sim Orphan Age, which describes itself as “an intimate 4X where survival replaces extermination.” It still involves exploring, exploiting, and expanding — but they’ve replace the final “X” with “empathy.”

But will changing the formula make for a good game? Representation matters in pop culture, and, hoo boy, do some 4X games have atrocious representation. (You could devote entire dissertations to any of the Xs on their own and how they model real-world colonialism, imperialism, etc.)

But games, as a medium, are somewhat unique in that playing them can also simultaneously be an invitation to experience a simulation of power. They can be arguments about who gets to wield that power, too, as well as make it seem natural that some people should win and others should lose in the game of life. That might be one of the most subtly problematic issues of representation there is.

Read next: Learn how to build better web experiences with this $29 UI/UX course bundle