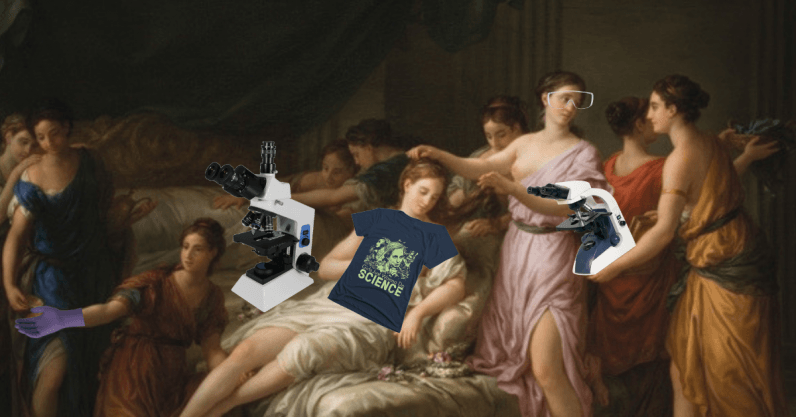 Can you name a female scientist from history? Chances are you are shouting out Marie Curie. The twice Nobel Prize-winning Curie and mathematician Ada Lovelace are two of the few women within Western science to receive lasting popular recognition.

One reason women tend to be absent from narratives of science is because it’s not as easy to find female scientists on the public record.

Even today, the numbers of women entering science remain below those of men, especially in certain disciplines. A-level figures show only 12 percent of candidates in computing and 22 percent in physics in 2018 were girls.

Another reason is that women do not fit the common image of a scientist. The idea of the lone male genius researcher is remarkably persistent. But looking to history can both challenge this portrayal and offer some explanation as to why science still has such a masculine bias.

For a start, the traditional view of science as a body of knowledge rather than an activity ignores women’s contributions as collaborators, focusing instead on the facts produced by big discoveries (and the men who made them famous).

The 19th-century astronomer, Caroline Herschel, languishes in the shadow of her brother William. Physicist Lise Meitner missed out on the 1944 Nobel Prize for the discovery of nuclear fission, which went to her junior collaborator, Otto Hahn, instead. Even Curie was attacked in the press for supposedly taking credit for her husband’s Pierre work.

The historian Margaret Rossiter has dubbed this systematic bias against women the “Matthew Matilda Effect”. Before the 20th century, women’s social position meant the only way they could typically negotiate access to science was to collaborate with male family members or friends and then mostly only if they were rich.

This left them prey to the traditional hierarchical assumption of woman as supporter and helper to man.

An obituary in Nature in December 1923 of the physicist and electrical engineer Hertha Ayrton, who won the Royal Society’s Hughes Medal for original research in 1906, illustrates this.

The obituary criticized Ayrton for neglecting her husband, stating that instead of concentrating on her science she should have “put him into carpet slippers” and “fed him well” so he could do better science. The tone of this obituary set the stage for her legacy to be forgotten.

These lasting attitudes about a woman’s “proper” role works to obscure scientific contribution. They also lead us to ignore women working as collaborators in areas historically more welcoming, such as science writing, translation and illustration.

As well as forgetting female scientists, we forget too that science has only been a profession since the late 19th century. Then it moved to new institutional settings, leaving women behind in the home where their science became invisible to history.

For example, few remember pioneers such as Henderina Scott, who in 1903 was one of the first to use time-lapse photography to record the movement of plants.

Women’s exclusion from professional spaces at this time is one reason why women became more active in scientific disciplines that still relied heavily on fieldwork, such as astronomy and botany.

Women were typically refused admission to elite scientific institutions, so we do not find their names on fellowship lists. The first women were elected as fellows of the Royal Society in 1945, and the French Academy of Science didn’t admit its first female fellow until 1979.

When the Royal Geographical Society debated the possibility of female fellows in 1892 and 1893, an angry dispute between council members was conducted via the letters page of The Times and it only finally admitted women in 1913.

Yet, scientific women worked though the cracks. Between 1880 and 1914, some 60 women contributed papers to Royal Society publications. And some women continued to work as scientists without pay or titles.

Dorothea Bate was a distinguished paleontologist who was associated with the Natural History Museum from 1898 yet wasn’t paid or made a member of staff until 1948 when she was in her late sixties.

Why this pervasive ambivalence to female scientists? In the late 19th century, science taught that there were innate intellectual differences between the sexes which limited women’s suitability for science. (Another reason why scientific societies did not want their prestige tarnished by female fellows.) Charles Darwin argued that evolutionary competition led to the higher development of male brains.

Scholars such as Carolyn Merchant and Londa Schiebinger have demonstrated that the birth of modern science in the late 17th century embodied a masculine ethos hostile to women’s participation.

Femininity became associated with the passive object of scientific investigation, in direct opposition to the active male investigator.

Science and nature were regularly personified as women up until the early 20th century, with the male researcher characterized as penetrating their secrets. This cultural understanding of science – which has nothing to do with the numbers of each sex practicing – presented a challenge to women that’s still recognizable today.

Although we must be careful not to overestimate how women were historically active in science, it is important to remember those women scientists who did contribute and the barriers they overcame to participate.

This is one strand in tackling the continuing tension between femininity and science, providing female role models, and increasing women’s participation across all scientific disciplines.

This article is republished from The Conversation by Claire Jones, Senior Lecturer in History of Science, University of Liverpool under a Creative Commons license. Read the original article.

Read next: Get web projects off the ground faster with this $24 Flask coding bundle