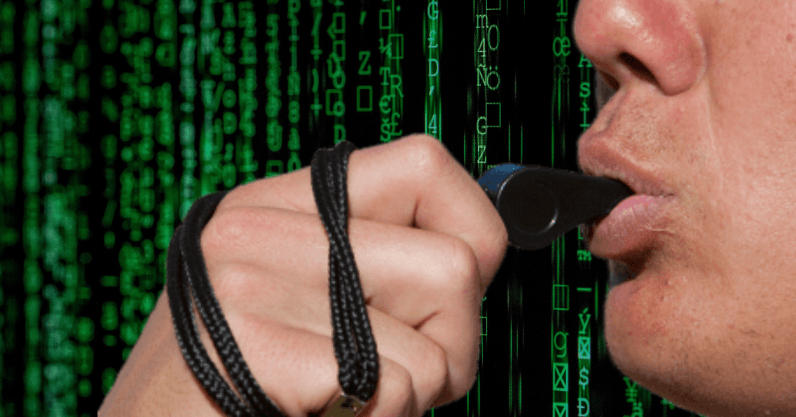 When the term “whistleblower” comes to mind, generally one is reminded of government and even shadow agency problems brought to light. Edward Snowden, for instance, is an excellent example of this behavior, along with his revelations about the NSA and government spying on American citizens.

But there’s another aspect to the concept. It involves the ousting of damaging, relevant information related to large corporations or individuals in the business world. As a more recent example, the Facebook and Cambridge Analytica debacle comes to mind.

We’ve known forever that Facebook has collected our data and information, but we didn’t necessarily know what they did with it. As a result of a whistleblower, we now know they’re providing it to third-party companies—which is not right.

There are, of course, other instances when whistleblowers ousted a company or individual by alerting society about shady dealings.

The more important question, however, is how important are these people? How has tech facilitated and led to the emergence of such instances? Why is it important, and how do these cases help us as a community?

What are “whistleblowers,” really?

To understand the complexity behind whistleblowers and their actions, we must start with the basics. A whistleblower is essentially a current or former employee of an organization who exposes and sheds light on potential wrongdoings. This news may include information about illicit activities, improper waste disposal, fraud, theft, mismanagement, abuse of power or similar events that pose a danger or risk to public health.

In most cases, whistleblowers are protected by law and cannot receive unlawful retaliation by an employer or company for their actions. Harassment in any form is also prohibited by law, though this law is not always honored.

How are they different from saboteurs and traitors?

The act of releasing protected information or trade secrets is called “leaking” and involves what you’d expect: the voluntary passing of confidential data or details, most likely to the press.

The most common form is the sharing of information made by a confidential source, who may or may not go unidentified. In this way, whistleblowers and “leakers” are synonymous. Both types “release” information to various channels with the intent to make it public.

Whistleblowers, however, are protected because the law dictates the information they share is not classified and/or does not fall under the protection of the Uniform Trade Secrets Act, as outlined in the Government Accountability Project. If the information at hand is classified, then it must be passed on through secure, designated channels. If a whistleblower does not follow this process, they’re no different than a leaker.

Now, this is where things get even more complicated. A leaker can be a whistleblower, but they could also be a saboteur or traitor. It depends on the information released, as well as the methods and intentions for doing so.

Generally speaking, a saboteur has the intent to either cause harm or damage the reputation of parties involved. They might, for example, release inside rumors or data that portrays a company in a bad light but has no bearing on public health and safety.

Traitors, on the other hand, expressly deal in trade secrets or government and national details that could potentially harm larger bodies. A double-agent who releases sensitive information about our federal government to another country, for instance, would be considered a traitor.

People like Edward Snowden don’t necessarily fall under one type of leaker or whistleblower, as there are many complicated goings-on behind the release of information he dealt with. The NSA’s spying under PRISM was an overreach of their power, so Snowden was helping the American people in this regard.

Some of the information he released, however, can be considered very damaging for the national government and related agencies, which could be construed as sabotage. Some even call Snowden a traitor.

When are whistleblowers necessary?

Believe it or not, whistleblowers and leakers do play a pivotal role in modern society, especially when it comes to public health and safety.

There are always exceptions, but generally, they help put a spotlight on wrongdoings and harmful actions of corporations, government agencies or bodies and even influential individuals. They also work to keep larger-than-life parties honest.

A great example is how one whistleblower, Anthony Pompliano has accused Snapchat of doctoring their metrics.

He alleges that the performance and business statistics the company has released aren’t exactly accurate, which is bad news for a publicly traded company with many investors, many of whom are average citizens.

But perhaps one of the most pertinent examples right now is that of Tesla and SolarCity or Tesla and its whistleblower.

In late 2016, Tesla officially acquired SolarCity for $2.6 billion. SolarCity was a budding solar technology provider. For some time, everything appeared to be going well — that is, until whistleblowers spoke up.

Three former employees are now suing SolarCity and the parent company Tesla for rampant misbehavior. In the suit, they explain that SolarCity created “fake sales accounts” to produce “unjustified bonuses” for various employees and generate an “unreasonably high valuation of SolarCity” to please investors.

More importantly, they allege severe mistreatment, including prolonged harassment, lack of overtime pay and intense discrimination. When they tried to bring up the incidents with management, they were fired, which completely goes against their protections under whistleblower laws.

The automaker Tesla is also experiencing another whistleblower scandalthanks to Martin Tripp’s revelations. Allegedly, the company reused damaged battery cells in their vehicles, which were then sold to customers.

Why the proliferation of whistleblowers in recent times?

It seems fairly common to see leakers and whistleblowers exposing wrongdoings these days. The vast #MeToo movement — where many women across a wide variety of industries have spoken up about sexual abuse, harassment and discrimination — is an excellent example.

The question is, why now? Why are many of these events occurring, and why does it seem to be happening more often and in higher amounts?

Realistically, it’s because people are more aware today than they’ve ever been. There’s a rising need for transparency in the face of corruption.

That need includes corruption across many different channels, unfortunately, including in the government and national agencies, along with some of the most significant organizations in the business world.

You could argue that it’s driven primarily by the open internet and hyperactive social communities. These topics and events are more public thanks to social sharing and online discussions. Not to mention, people are more tuned in to what’s happening in the world around them.

Whistleblowers now have a proper, open channel for sharing their experiences. In the case of Tesla and SolarCity’s litigation, for example, the legal proceedings are being followed closely across many online and social platforms.

The same can be said of Martin Tripp’s accusations, which saw near-instant coverage by the modern press and media.

Ethics or morals? The dilemmas plaguing a modern whistleblower

Is it right or wrong? Should these people be bringing such transgressions to light, or should the handling remain private and confidential? This is where personal bias comes into play.

Some feel that whistleblowers are always wrong and should be treated as such, while others think it’s more important to shed light on various wrongdoings. Not that harassment, discrimination and similar treatments shouldn’t be exposed. It’s more that some feel the conflict should be dealt with privately as opposed to in the open.

This debate relates to the difference between ethics and morals. Morals are more about a person or individual’s standards, behavior and beliefs about what is an acceptable action or decision for them in their particular situation or life.

Ethics, on the other hand, are moral principles, yes, but they govern a person’s behavior most commonly in their field. Medical ethics, for instance, relate to doctors and health professionals’ morals in regard to how they operate.

Whistleblowers may have an ethical obligation to keep confidential information to themselves and away from the public. However, they may have a moral responsibility to protect public health and safety.

One is about loyalty to a governing organization or team, while the other is about devotion to the greater good. It’s incredibly complex, especially with some of the situations that have cropped up in recent times.

Therefore, it’s less about what’s right or wrong, or even how others feel about a particular action or event.

Instead, it’s about what’s best for those affected. If a company is dumping toxic waste into the local water supply, then clearly, the inhabitants are most affected and have their lives at stake. Such an issue should outweigh the reputation of the business — though it doesn’t always happen that way.

Lack of transparency can have a detrimental effect on not only a business or team but also the average citizen. Systemic fraud at Wells Fargo could have been stopped much sooner had a whistleblower spoken up, but it was allowed to fester instead.

Why we need them

Simply put, whistleblowers help everyone see or understand things that are happening behind closed doors that genuinely shouldn’t be. Of course, this definition is an incredibly basic one, but it provides the gist of the concept.

We need whistleblowers or leakers to hold organizations, governing bodies and even influential individuals accountable for their actions. Harassment, if left unchecked for decades, can grow rampant in an industry or setting, as we’ve seen in Hollywood and the movie industry.

To improve as a society — which means changing for the better — these things must be brought to light and dealt with. Corruption and illicit activities should not be swept under the rug, and yet here we are in 2018 seeing it happen again and again.

It needs to be mitigated as much as possible, and for that, we need whistleblowers to put a spotlight on where it is and who is involved.

Read next: Sim-swappers hack League of Legends star out of $200K worth of cryptocurrency