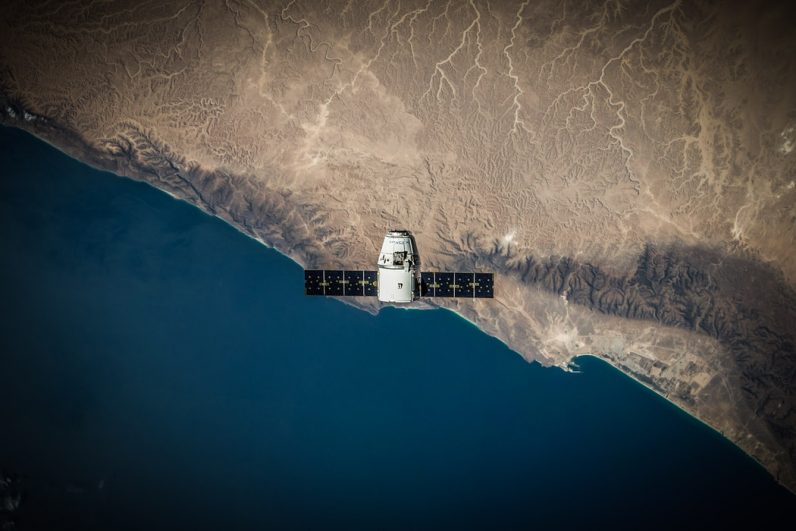 The average rainfall for the first two weeks of July in England was 6mm, while only 15mm fell throughout all of June, according to the UK’s Environment Agency.

To give some idea of how low this is, the definition of a desert is a place with an average rainfall of 21mm per month.

The Met Office recently illustrated the effect of this drought on the UK with satellite images showing an average color change from green to brown over the course of 12 weeks, as the lack of rain caused plants to wilt.

High altitude images of Earth’s surface can illustrate events occurring on a grand scale to the public, like the recent heatwave in the UK.

This is not a recent development, however – satellite imaging has a long history that begins with glass plate cameras on hot air balloons in the 19th Century.

Advances in technology meant that by the start of the 20th century, cameras were light enough to attach to pigeons.

These photographs provided a rare glimpse of cities and rural landscapes from above, even if they sometimes contained a feathered wing or head in them.

As human flight advanced so did the number of aerial photographs, with the US Geological Survey having access to land use images from the 1930s.

While these were useful for mapping, the advancements were driven by a military need for reconnaissance during the World War II and the Cold War.

The eye in the sky’s helping hand

Everybody is now used to seeing images from satellites, whether it’s in weather reports, Google Earth, or news coverage. The most obvious images rely on visible light for items of public interest such as the level of developed land in the UK compared to green areas, or how many sandy beaches there are in the world.

Satellite imagery is also vital in scientific research and is used to chart changes in the environment. Climate monitoring, tracking deforestation and recording arctic sea ice loss are all possible with satellites.

The before and after satellite images from natural disasters allow us to comprehend the scale of the devastation, like in the recent Kilauea volcanic eruption on Hawaii or the wildfires in Greece.

The damage done by earthquakes and tsunamis can also be monitored. Even the effects of oil spills are visible from space, with imaging showing the extent of the spill and the clean-up efforts involved.

Visible light is not the end of the story, however. Using wavelengths like infra-red can give an idea of the temperature of an object, and can produce images at night as well as during the day.

They can be used to monitor standard weather patterns as well as extreme events like hurricanes.

Infra-red images can also be used to analyze urban heat islands, indicating how much heat is produced in a city and how effective cooling methods are.

Longer wavelengths like microwaves and radio waves can produce radar imaging, giving information on the altitude profile of the Earth’s surface by measuring how long it takes a signal to reach the surface and return.

When over water, this system can generate images of the water’s surface roughness, which in turn gives an idea of wind speed.

Wavelengths shorter than visible light such as ultraviolet, x-ray, and gamma-ray are rarely used for imaging the Earth from space as the atmosphere scatters them.

The shorter the wavelength the more scattering occurs. That’s why the daytime sky is blue – it’s the color of the visible light spectrum with the shortest wavelength.

Imaging as a tool for change

With all of these positive uses, is there anything to fear from satellite imaging? A recent weather satellite, the WorldView 4 has an imaging resolution of 31cm on the surface of the Earth.

While this is not enough to identify an individual or read a car number plate, in conjunction with other surveillance it could easily be used to track individuals or groups. With spatial resolutions as high as this, concerns over a “Big Brother” state aren’t so outlandish.

This is nothing new, though. During the Cold War, it was claimed that satellites could read the headline of a newspaper from space, although the imaging technology at the time was not powerful enough.

In fact, without a huge mounted camera this is likely to never be the case, simply due to the altitude that satellites must orbit at and the scattering effect of the atmosphere. So we should be safe for now.

This should not stop us from using satellites but we should think more about what our aims are with imaging. A good start would be considering how observation of our planet from space helps to contextualize environmental problems. The EarthNow project, which provides constant video feeds of the Earth from orbit could hold the answer.

These satellites can illustrate our changing climate and the sustainability issues which may seem abstract in detail but become clear once we zoom out. Who knows, they may even convince the Flat Earth community that the world is round.

Written by Ian Whittaker, Lecturer, Nottingham Trent University This article was originally published on The Conversation. Read the original article.

Read next: Nintendo – we have to talk about your new Labo vehicle kit video