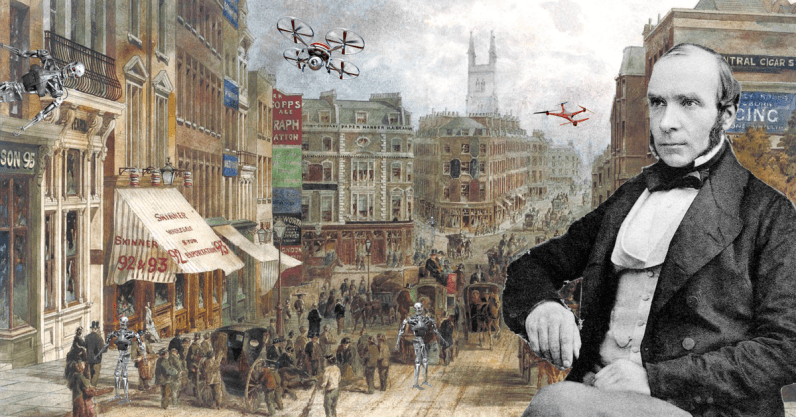 What’s the first name that comes to mind when you think about a smart city?

It’s natural that we should leap to the technologists. Smart cities are, after all, about technology: driverless cars, drone deliveries, and Minority Report-style signs that change depending on who’s looking at them.

But I’ll tell you who I think of first: an English physician called John Snow. An unusual choice, perhaps, given that he died in 1858.

The reason I mention him is that as we think about the future of our urban spaces, it’s important to recognize that some of the ideas we think are most cutting-edge actually originated long ago. What happened in history can offer lessons about what we should do today.

So let’s look at John, starting with where he was and what he was doing in 1854.

Living near Regent Street in central London, he was a practicing physician and one of the early pioneers of anesthetics. At the time, anesthetics were commonly chloroform or ether, so he knew a thing or two about the effect on the human body of breathing in gases.

He knew that, all other things being equal, if the volume and temperature of the gas were the same, and the size of person roughly constant, the effect on each individual would be similar. This was important to know for his patients, who ranged from working men requiring amputations to Queen Victoria – the first monarch to use anesthetics during labor.

It would turn out to be even more important given what was happening just a few streets away: in 1854 the people of Soho were dying. Out of nowhere, a cholera outbreak claimed the lives of 616 people; 127 died in just three days. Some fell ill at lunchtime and died before dinner.

The recently formed Board of Health thought it knew the cause: miasma, or bad air.

It’s no wonder this was said to be the culprit, as that part of London was thick with stench. The smell of rot and decay was almost unbearable – attributed to the habits and living conditions of London’s poor. They lived in badly ventilated houses with no running water or connected sewage system. Human waste was thrown from windows where it slowly decomposed in back yards, spilled out into street gutters, or seeped into basements where it could fester away, three feet deep. As if that weren’t bad enough, Soho was also home to the revolting odors of tanners and slaughterhouses. Of course it was the fumes that were making people ill.

But Snow thought that made no sense, for two reasons.

First, if it was about gas, why would some people living in the same streets, breathing the same air, be affected but not others? Second, why were the symptoms of cholera not seen in the lungs but in the digestive system? Victims died from losing fluids. Surely it was about something they consumed, not inhaled?

So he decided to investigate. At huge personal risk, he headed to the most disease-ridden part of London to speak to people to find out what all the victims had in common.

And this led him to a theory. Water.

The victims, he believed, all got their water from the Broad Street pump – and that water had been contaminated with cholera through sewage waste. But how to prove it? He proved it with data.

He started plotting the addresses of the victims on a map. One black line for each death. This pioneering data visualization confirmed that the streets that had easiest access to the pump suffered the highest rates of death.

The data showed, too, that there were anomalies. Why was it that not a single worker at a local brewery, based right next to the pump, had died? That made no sense if air was the transmission mechanism. It made perfect sense when he discovered that the workers drank beer and not water.

Fighting against every ounce of conventional wisdom, his data eventually convinced the local council to remove the pump handle. How many lives that saved, we’ll never know.

Yet it would take more than a decade before government formally accepted the Snow’s explanation. They looked for facts that supported their miasma theory; a barrage of data that collectively added up to nothing. Meanwhile, with the support of the Public Health Board, the Metropolitan Commission of Sewers was busy building sewers whose purpose was to clean the air by removing human waste directly into the Thames. As Steven Johnson has written his excellent book on this subject, The Ghost Map, with some sense of irony: “The first defining act of a modern, centralized public health authority was to poison an entire urban population.”

The reason I tell this story is that more than 160 years on, Nesta is working with the GLA and 14 London boroughs to test whether the same techniques can work once again in the streets that John Snow knew so well. Happily, London no longer has cholera to contend with, but there are still important issues to solve:

How can we run and improve public services when there’s less money to pay for them?

How can we combat the modern-day miasma – London’s air pollution – which exceeds EU legal limits?

How do we identify unlicensed properties where rogue landlords exploit vulnerable tenants?

The answers are already out there – we just need to know where to look.

The third of those issues is the one we have chosen to tackle first. Following Snow’s approach, we’re beginning by building up a theory based on the first-hand testimony of those who deal with the issue every day: building inspectors.

We’re then bringing together data from all the boroughs to map where known rogue landlords operate and to look for other datasets that can help predict where the unknown cases are most likely to be.

And the best part? None of this requires sci-fi technology.

It’s about finding people with the knowledge and ability to ask the right questions. People to know what data to look for and how to use it. People to act upon what the data actually says. Though we may mock the authorities in Snow’s time for their ill-informed actions, governments around the world today preach evidenced-based policy making, yet all too often practice policy-based evidence making.

In short, the smart part of a smart city is not – and never was – the technology, but the people.

And as London and cities around the world face ever more pressing challenges, let’s hope for all our sake that there are many more smart people like John Snow.

Read next: Private companies are launching a new space race – here’s what that means