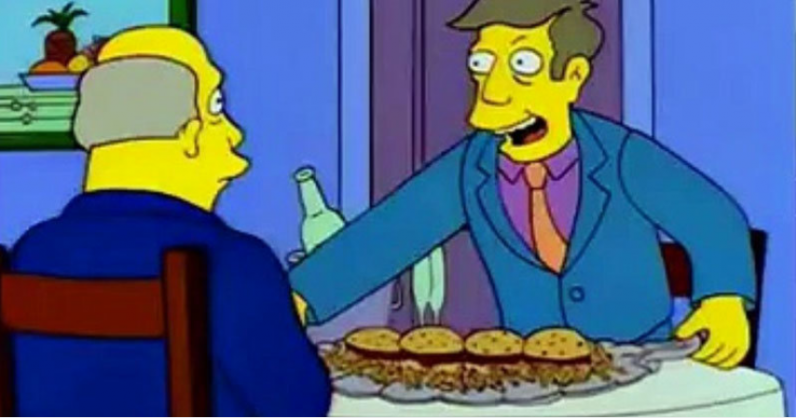 A scene from a 1996 episode of The Simpsons recently spawned a fresh clutch of memes across the web, shedding light on a very specific – and, for the average web user, peculiar and dubiously-named – form of online fan activity: shitposting. Like other Internet memes, shitposting involves users remixing and remaking snippets of popular culture – in this case, the “steamed hams” skit between Superintendent Chalmers and Principal Skinner – to create an original take.

One user created a version auto-tuned to the 1999 song “All Star” by Smashmouth – a tune with a memetic following of its own. Another created a version that follows the scene’s script word-for-word, using clips from Seinfeld. There’s also a Grand Theft Auto version, a Guitar Hero version, and even a virtual reality version of the sketch.

These examples, among countless others, show that Simpsons shitposting is not limited to fans of the series; people come at it through other channels of internet culture, and from fan bases of other series. They also offer a glimpse into the evolution of shitposting, from an intentionally dull or offensive diversion tactic to an increasingly sophisticated communication tool.

The term “shitposting” originally described a subversive activity, whereby users of online forums posted irrelevant, shocking or offensive content on comment threads, in an effort to derail conversations. But in the decade since its first known use in the Something Awful forums, the term has come to refer more generally to the activity of posting content that’s intentionally devoid of value.

As the name suggests, a shitpost is typically intended to be of poor quality, low-level humor and little relevance to the forum where it’s posted. Yet Simpsons shitposting – where fans combine or alter well-known jokes from the series to create new memes – is gradually redefining some aspects of the activity.

In its early incarnations, Simpsons shitposting was as arbitrary and devoid of effort as other forms of shitposting. Rather than creating new content out of popular jokes, users simply recycled existing content from the series. But since then, entire groups have emerged on social media, dedicated to Simpsons shitposting – it’s gone from being a subversive distraction to the entire focus of certain forums.

In response, shitposting Simpsons fans have upped their efforts. Today’s shitposts typically combine two or more gags from the series, appealing to the series’ most elite fans (read: those most familiar with the text). Because of The Simpsons’ worldwide popularity and considerable longevity, younger audiences are as engaged with the jokes as older fans, who enjoyed them when they first aired.

Not only do the clever combinations of jokes in Simpsons’ shitposts celebrate deep familiarity with the series, they also require considerable time, effort and skill with media editing and animation software. Doubtless, some shitpost creators are media professionals. But skills in, and access to, free, open-source, inexpensive, or cracked versions of such software is relatively common among younger users.

What links together many versions of the “steamed hams” meme – from Smashmouth to Seinfeld, and indeed the original gag – is that they are all relics of ‘90s pop culture. Yet these references aren’t just the preserve of the 30-something millennials who grew up with them – given the trend for ‘90s fashion and entertainment among people now in their teens and early twenties, as well as the modern media references incorporated into many of these shitposts, it’s clear the younger demographic has seized on this meme, and run with it.

The first generation not to know a time before the internet is coming of age – and they’re bringing internet culture into the mainstream. Activities which were once subversive and taboo are becoming normalized, democratized, and increasingly sophisticated through widespread engagement and good-humored oneupmanship.

Teenagers and young adults are taking charge of their future with grit and determination. As they do so, they are also making the past their own. And while their online leisure activities might seem odd, I must say, they post some good shit.

Read next: IKEA is making its first Bluetooth speakers, and they look totally fräckt