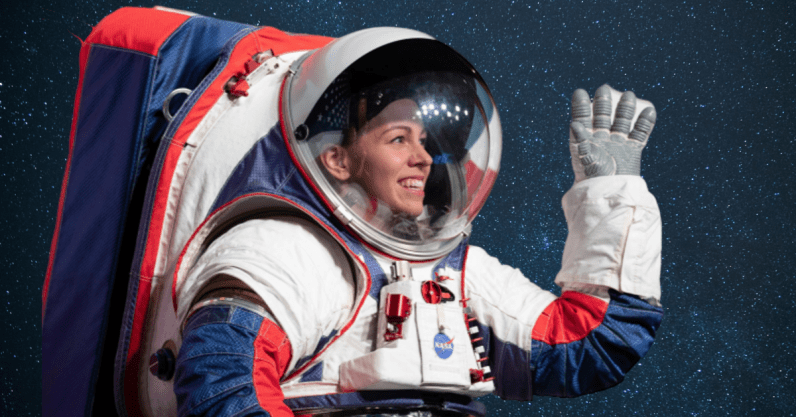 In March, NASA announced plans to conduct its first ever all-women spacewalk with astronauts Christina Koch and Anne McClain. However, what would have been a giant leap for womankind was canceled because NASA hadn’t packed enough spacesuits. Now, seven months later, the space agency has rescheduled the what-will-be historic moment and introduced a new spacesuit that will fit every human body, regardless of gender.

On Tuesday, NASA’s administrator Jim Bridenstine showed off the space agency’s latest, most diverse spacesuit yet. The red, white, and blue colored-suit — which took two years to design — was created specially for NASA’s 2024 Artmix mission, a journey that will see the first woman to step foot on the moon.

During the launch, NASA’s spacesuit engineers, Kristine Davis and Dustin Hogmert, demonstrated how these suits give astronauts more flexibility than ever before. Now, when in space, NASA’s crew will be able to walk more effortlessly, pick up rocks, and drive a rover with more ease.

On Tuesday, NASA TV streamed an hour-long video introducing its Artemis Generation Spacesuits from the space agency’s headquarters in Washington, US. Bridenstine explained that although accommodating for all kinds of body types was one factor influencing the new design, another goal was to allow astronauts more time in space exploring with fewer risks.

As reported by Wired, the new spacesuits will protect astronauts from temperatures ranging from 250 to minus 250 degrees. The suit uses similar fabrics to that of older suits from the 1990s, but with upgraded electrical systems, environmental filters, and pressure control systems, astronauts will now be better protected from radiation found in space — something that penetrated older suits in previous moonwalks.

The space suit-sizing fiasco that happened back in March wasn’t as avoidable as it may seem — fitting spacesuits is tricky business given the body grows taller in microgravity. However, questions were raised as to where women stand in a typically male-dominated industry — would this same situation happen to an all-male crew?

Throughout NASA’s history, more than 500 people have ventured out into space yet only 11 percent have been women. But the future of space travel looks bright with the first all-women spacewalk set to happen on October 21 at 6:30 a.m (Eastern) – you can watch live coverage of Koch’s and Meir’s spacewalk on NASA TV.

Read next: Samsung security flaw allows your fingerprint to unlock any Galaxy S10