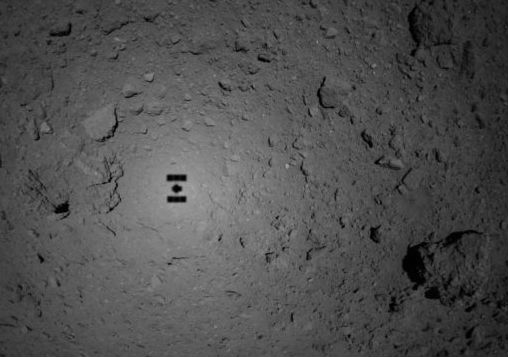 A spacecraft launched by the Japanese Aerospace Exploration Agency (JAXA) in 2014 successfully touched down on a speeding near-Earth asteroid, and has collected samples to bring back for scientists to study.

Thank you so much for your support from all over the world! pic.twitter.com/cHkeTCBgcs

For the space aficionado in me, this is a goosebumps-raising achievement because the asteroid Ryugu is a tiny rock, floating in space about 300 million km (186 million miles) away from our planet. It took the Hayabusa2 spacecraft almost four years to reach the asteroid, and it’s only the second time humans have been able to collect samples from an astroid like this.

Getting samples like these back to Earth excite me because they represent both a huge challenge for space exploration, and a grand achievement.

On one note, the challenge is that we need to figure out an effective way to analyze the mineral compositions of heavenly bodies before we can send crewed missions to them. The biggest hurdle here is that our pay loads are limited in their size and weight since we do not have rockets large enough to carry our best scientific equipment. So there’s always a limit to the kind of scientific analysis we can carry out on these surfaces.

However, it thrills me that we have achieved a workaround for now, where if we can’t bring the tools to these heavenly bodies, we’ll bring parts of them to our tools here on Earth.

To achieve this momentous feat, Hayabusa2 had to maintain an orbit around the diamond shaped Ryugu for more than six months after reaching it. During this time, the JAXA team had to study the asteroid closely and plan a way for the probe to safely land on it. From its orbit, Hayabusa2 sent two hopping rovers Rover-1A (HIBOU) and Rover1B (OWL) to survey the asteroid’s terrain for a landing spot.

This is an incredibly complex task because the mother ship had to remain in orbit around the asteroid which was travelling at more than 22,000 km/h (13,891 mph) relative to Earth at that point, while the two hoppers carried out their reconnaissance mission.

The surface of Ryugu was not what we expected. So our sampler team had to conduct an experiment to check we could still gather material from the asteroid surface when we attempt #haya2_TD touchdown this Friday! https://t.co/bCzvW2gwSr pic.twitter.com/XxJXETKB6N

The saga got more intense when the hoppers found the asteroid’s surface to be challenging for the mother ship to land on. While JAXA scientists originally thought Ryugu’s surface was a “powdery fine regolith,” the hopping rovers dropped by the spacecraft found the terrain to be made of larger-than-expected gravel.

In fact, the probes could move around the asteroid only by hopping across Ryugu’s low gravitational field using the torque that was generated by rotating masses within the rovers. This was completely different from the kind of wheeled rovers we have sent for exploration on the moon and Mars.

Once a safe landing spot was determined, the mother probe shot bullets at the asteroid’s terrain to create soft piles of smaller debris which it collected and ascended to orbit around the asteroid again.

In the following weeks to months, the mother ship is also expected to grab two more samples from Ryugu. The second sampling exercise will be similar to the last one, but the third involves Hayabusa2 first firing a copper projectile into Ryugu, waiting for the dust to clear, and then swooping in to load the rocky debris.

Hayabusa2’s main goal is to help scientists better understand the solar system’s early history and evolution, especially that of the inner planets – Mercury, Venus, Earth, and Mars. The mission could also help us understand the role of asteroids such as Ryugu in the emergence of life on Earth – which remains a mystery to this day. Scientists now believe that water, which is believed to have been a key piece of the puzzle, may have come to Earth from asteroids.

While almost 16 minor planets including asteroids, dwarf planets, and other heavenly rocks have been visited by space probes so far, Hayabusa2 is only the second successful mission to directly land a probe and sample an asteroid to bring back to Earth. The previous was the current probe’s predecessor, Hayabusa. The 2005 mission, saw JAXA land a probe on the asteroid Itokawa, and collected samples in the form of tiny grains, which were returned to Earth aboard the spacecraft on 13 June 2010.

Following the mission, JAXA announced in 2013 that about 1,500 extraterrestrial grains were recovered from the samples, comprising the minerals olivine, pyroxene, plagioclase and iron sulphide.

If you are a space enthusiast like me, you may also want to keep your eyes open about a similar mission orchestrated by NASA that is currently underway. The American space agency’s OSIRIS-REx spacecraft arrived at its target, the 500 m wide, carbon-rich asteroid Bennu, in December last year, and is scheduled to obtain samples in 2020, and get them to Earth in September 2023.

Perhaps with more missions like these, we’ll be able to piece together life’s origin story, and also find ways to utilize the immense mineral wealth of asteroids.

Read next: Blackmailers made $332,000 in Bitcoin during ‘sextortion’ scam