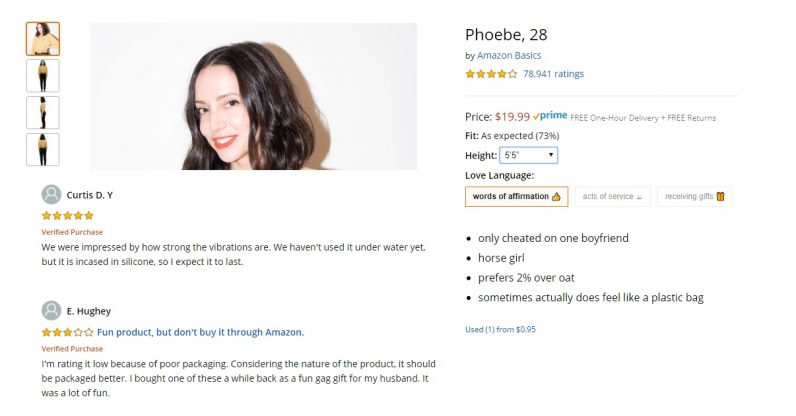 How’s the idea of an “Amazon Dating” site strike you? Are you horrified? Intrigued? Resigned? Well don’t worry (or get too excited), it’s a joke… at least, for now.

i wasn’t having much luck with dating apps so i partnered with @amazon to make a better one 👀💘https://t.co/ticxR7j7CO

As satire goes, this one is pretty elaborate. Every potential paramour comes complete with a price and reviews. You can select them by height and love language (“acts of service,” or “physical touch”). It’ll no doubt give you a smile if you’re just glancing at it, but once you look at it for a few minutes, it starts to look pretty damned creepy.

A dating site to help you with #ValentinesDay lol 💕 https://t.co/1M0lPRn90B

It was created by Ani Acopian, Suzy Shinn, Morgan Gruer, and Thinko. The latter is an animation studio that’s done other parody sites before, such as ScamDaddy and WhoPaid99Cents. It’s already a hit on the internet, as you might expect. Someone’s already done an “unboxing” of one of their dates:

finding love is HARD. i'm so hyped to partner with @amazondating to finally find the one!! also the 2-hour same-day delivery was such a nice touch #ad #amazondatingambassador pic.twitter.com/HWH4NTun7z

I wasn’t feeling truly uncomfortable until I saw the “Best Seller” tag above Amy’s picture. Intellectually, I know it’s amusing, but my visceral reaction when I see the capitalist commodification of human romance taken to the logical extreme was horror. As in, this would be funny if it didn’t also feel like, um, the future.

I’m exaggerating, of course, but Facebook’s already put its hat into the dating ring, despite the fact that it’s blatantly unsuited to the inducement of healthy human romance — I don’t need to think about what it’d look like if Amazon decided to do the same thing. I guess the only thing I can take comfort in is that Thinko et al. was able to buy the domain name, so that means Amazon cares little enough about the concept that it didn’t do so itself.

Admittedly, I did get a bit of a laugh from the link at the top of the screen. Taking the place of Amazon‘s “Browsing History” or “Today’s Deals” tabs, you’ll see such things as “Your Last Relationship” which links to Britney Spears’ “Toxic” music video, and “Don’t See What You’re Looking For?” which links to Netflix. The “Prime Video” tab links to Chatroulette, which I didn’t realize until I’d clicked it, and I wasn’t in the office at the time.

If you’re interested, take a look for yourself here. You can also get your face on the site if that’s a thing you want to do.

Read next: Here's how to find The Ringer's podcasts on Spotify