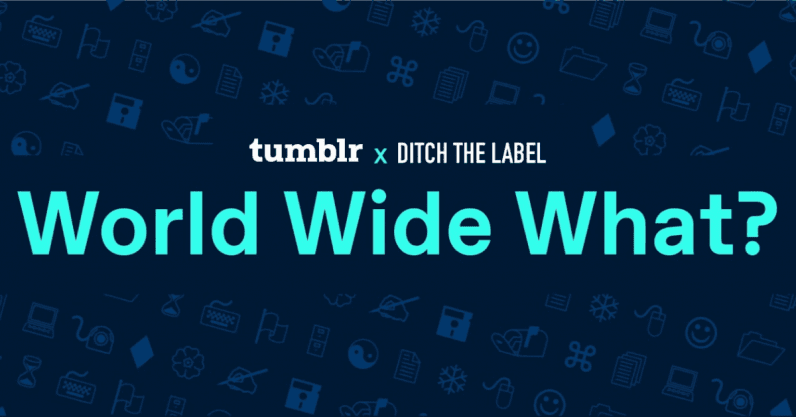 As we inch closer to the upcoming US presidential 2020 elections, social media giants have been updating their policies on the spread of misinformation to better protect the democratic process. The latest platform to join the ranks is Tumblr, which yesterday launched its internet literacy campaign to fight fake news and help young people spot other toxic activity online.

The campaign, World Wide What, was made possible in collaboration with the UK based internet literacy organization, @ditchthelabel. Its aim is to help make the internet “a better, safer, and more place for everyone,” and has been described as a guide for navigating conversation around a healthier relationship with social media.

World Wide What will focus on six main topics with informational videos:

In its “Fake News and Skewed Views’ ‘ category, Tumblr emphasizes the importance of recognizing online misinformation and how to spot it. It outlines “real news by journalists adheres to strict standards, and social media posts are not the same.” The videos lists three types of fake news for users to watch out for including: satire and parody, misinterpretation, and disinformation.

Some categories will also be accompanied by Answer Times, an online Q&A session, with experts who can speak about one or more of the topics Tumblr is focused on. Currently, there’s four scheduled sessions with industry leaders including Jameela Jamil, founder body positivity organization, I Weigh, who will shed light on the effects of inauthentic social media personalities. This session will take place on January 22nd.

According to Tumblr, unlike most literacy campaigns, each category uses language and imagery that’s native on its platform with the use of GIFS, memes, and short text making this campaign more accessible and engaging for younger users.

While Tumblr is adamant the internet “can be a really wonderful place,” it also recognizes that toxicity and negativity happen everywhere online. “We are constantly striving to learn and utilize new ways to create a safe place for our communities,” the social media platform outlined on the World Wide What site.

These six videos may not spark a cultural shift in how people use the internet, but it’s at least promising to see Tumblr take charge of how it advises its 23 million users on how to mindfully use the internet through educational videos on important topics — especially at a time where fake news is creeping into our news feeds.

Read next: Telegram isn’t going to merge its cryptocurrency wallet and messenger app — for now