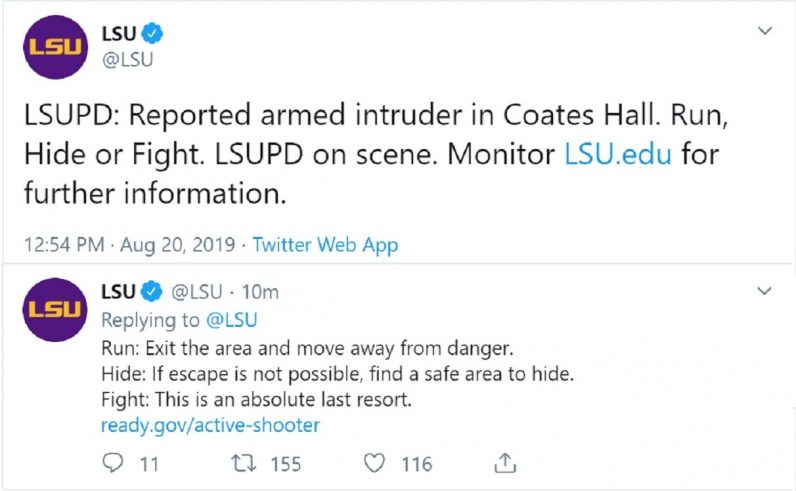 The official Twitter account for the Louisiana State University (LSU) today tweeted a warning to students, faculty and staff at approximately 2:54 PM local time (US central) indicating an armed intruder was on campus The tweet advises those on the premises to “Run, Hide, or Fight.”

Little is known about the incident at this time, but local news source WAFB 9 reports there’s been no indication that anyone’s been injured and ABC WBRZ 2 states that “the situation was reportedly under control within about 15 minutes of the alert.”  UPDATE: The report from ABC WBRZ 2 is NOT correct as of 3:34 PM local time:

That is NOT correct. The situation is ongoing. Continue to avoid the area or remain in a safe place. We will post when we have more information. https://t.co/nJU8ZyfKwg

Those who are potentially in harm’s way should consider the situation active and dangerous until such time as authorities clear the area.

Run: Exit the area and move away from danger.
Hide: If escape is not possible, find a safe area to hide.
Fight: This is an absolute last resort.https://t.co/Ow23ySe5gB

This protocol comes directly from the US government’s guidance on dealing with active shooters, and thus indicates the armed intruder is likely carrying a firearm. Per the resource at Ready.Gov:

RUN and escape, if possible.

HIDE, if escape is not possible.

FIGHT as an absolute last resort.

The LSU Twitter account has not issued a follow up and calls to the university have gone unanswered as of the time of this story being published.

The situation is ongoing. Continue to avoid the area or remain in a safe place. We will post when we have more information.

UPDATE : 4:53 PM CDT 20 August: LSU has issued an “all clear” after LSUPD investigated the report. According to one LSU official the incident may have been related to a plainclothes police officer wearing a pistol. This hasn’t been confirmed by staff, but the situation now appears to be under control.

Update: LSUPD has investigated the report of an armed subject at Coates Hall and has determined there was no threat. LSU is returning to normal operations.

LSU official just said they're about to send out an All Clear message https://t.co/EcfUFuFf52