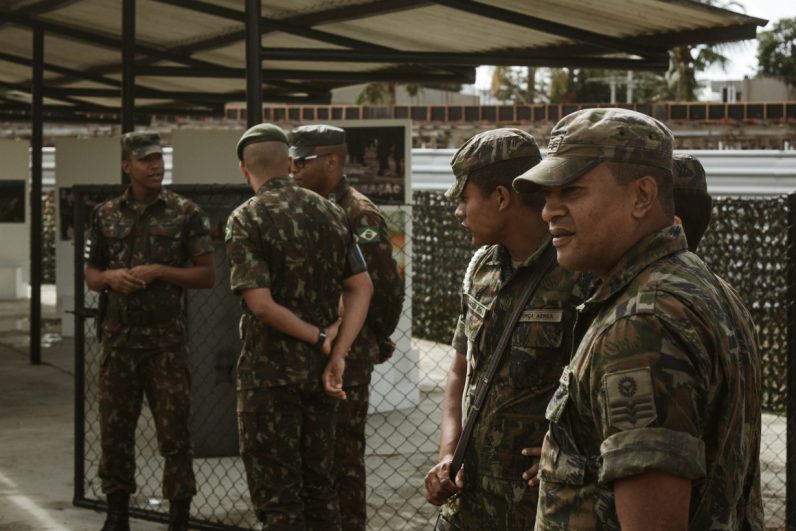 For most people, playing Call of Duty‘s campaign mode is as close as they’ll get to joining the military. For them, the everyday realities of uniformed service are unknown. But shining a light on this world are ordinary servicemen and women, and they’re using an unusual tool to do it.

For reasons I’ve yet to discern, the Chinese video sharing app (and bonafide teen sensation) TikTok is immensely popular with members of the military, who use it to share viral memes, perform “duets” with other users, take part in challenges, and share snippets of their day-to-day duties.

These videos tend to be well-received by other users, who “like” them, in turn propelling them to the app’s featured tab, and a potential global audience of millions. The app, which was created when Chinese app Douyin acquired  (and subsequently rebranded) Musical.ly, had an estimated 500 million users in June, and regularly features on the iTunes and Google Play top ten.

TikTok’s featured tab is an endless carousel of content that’s navigated by swiping up or down. This showcases the most popular content on the platform, and disproportionately tends to feature military users.

The type of videos shared by service members varies wildly, but largely speaking, they tend to follow the current TikTok trends and memes.

One common category of video is used to show the candid mundanities of everyday life, and is set to the song “Ooh Aah (My life be like)” by the Christian rap group GRITS.

There are countless examples of military versions of this. One British soldier serving with a UN mission (the specific mission isn’t specified, but his blue UN patch is visible in several of his videos) posted a video showing his squadmates relaxing in what appears to be a disused warehouse, his comrades slumped on cots.

Another serviceman posted a video to the song that showed him resting in his barracks, with his roommate playing a multiplayer FPS on a games console. Others have posted videos in more active roles, including boarding a C-17 Globemaster aircraft, standing upon the deck of a colossal aircraft carrier, or hanging from a transport plane.

Within this category of video alone, there’s a tremendous amount of diversity, which ultimately showcases the immense variety found in military life. It encompasses everything a soldier is likely to face in their career; from training and deployment, to moments of boredom and ennui.

One thing I observed is that most military users tend be be aware of the operational security concerns of their profession. They seldom post using their real names, and are cautious to not reveal anything that could be damaging. This is a real concern that was made even more apparent earlier this year, when the fitness app Strava inadvertently revealed the location of several secret overseas US military bases.

It’s also worth mentioning that with many military TikTok videos, there’s a fierce streak of rivalry running through them. It’s not rare to see rival branches roast each other. The term “chairforce” is thrown around frequently. You can guess what that means.

This good-natured competition manifests itself in several forms. Rivaling service-members may perform a “duet,” where two videos are created separately, and then placed alongside each other. The content of these varies, and could see them lipsync to a song or meme, or perform grueling physical exercises.

One particularly arduous example of the sees individuals perform planks or push-ups to the beat of fast-paced dance song. One popular choice is a remix of Maggie Lindemann’s “Pretty Girl.” Another is a dubstep cover of Meg and Dia’s 2006 single, “Monster.”

So, where does TikTok’s popularity in the military community stem from? That’s hard to say, as the company hasn’t released any demographic information on its users based on occupation.

An argument could be made that the presence of military-themed videos in TikTok’s featured tab is merely due to the community finding them interesting, and then surfacing them to the frontpage of the app. There’s potentially some truth to that. The same fascinations that brought me to write this article could also see people part with an upvote.

Either way, it’s clear that across the board, TikTok’s growth is soaring. Data from Boston-based app analytics firm Apptopia paints a picture of frenetic and sustained growth.

In the past three months, TikTok has acquired 30 million new users. Worldwide downloads of the app are up 20 percent. In the US, they’re up 25 percent. Thanks to the app’s addictive nature, US daily active users (DAUs) are up 67 percent, while for its closest rival, Snapchat, they’re down 11 percent.

Regardless of why they use TikTok, military users have opened up a world that was previously an opaque mystery to civilians. While I’m unlikely to ever join the uniformed services, the app’s featured tab has given me an insight into military life that I previously didn’t have.

One has to wonder if eventually TikTok could become an unlikely tool for military recruitment, with its viral posts and mostly teenage userbase. But that, my friends, is for another article.