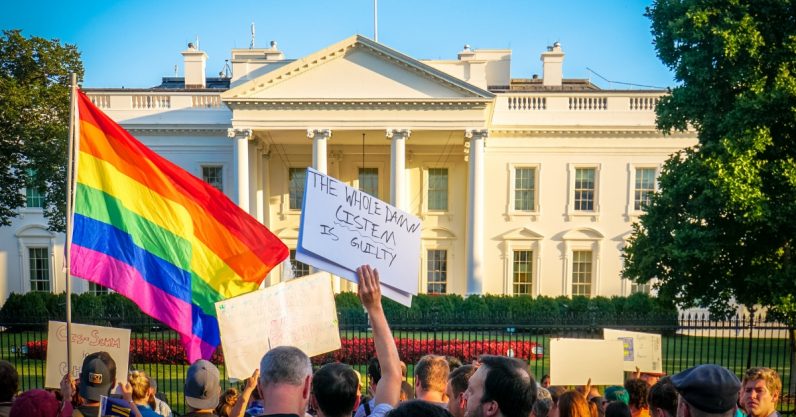 Over the weekend, the White House released a memo saying the Department of Health and Human Services is seeking to revise the definition of “sex.”

As reported by The New York Times, the absolutely bollocks memo details how the Trump administration wants to define sex by the genitalia a person is born with. The new definition would not include gender identity or sexuality, effectively denying transgender people civil rights protections. This would roll back several Obama-era policies concerning gender recognition in education and healthcare.

The memo states: “Sex means a person’s status as male or female based on immutable biological traits identifiable by or before birth… The sex listed on a person’s birth certificate, as originally issued, shall constitute definitive proof of a person’s sex unless rebutted by reliable genetic evidence.”

The outcry on social media was swift. Across Twitter, transgender people and their allies began posting photos of themselves and their stories with the hashtag #WontBeErased.

the Americans and their Trump administration seem to think trans people don't exist.

@ me with your glorious selfies/pics so we can RT them – today let's boost some trans joy, trans rage, trans life!

Hey Trump admins im here I’m queer and I #WontBeErased (disclaimer if u even try to post hate on this I’m shredding u) pic.twitter.com/aE70RZiEPK

Trans disabled people exist; I am one of them.#WontBeErased pic.twitter.com/CnQOpX0Rsc

When trans lives under attack, trans Latinas come together to uplift and support each other. Please follow and support the work of @ElLaTransLatina ✊🏽💖❤️🌈 #MiExistirEsResistir #WontBeErased #LiberaciónTrans #TransPower #TransLiberation Now! pic.twitter.com/h7e66qjbcj

Several people also took to Twitter to post helpful guidelines in the form of threads. These explained not only what the new guidelines would mean, but also practical ways to help transgender people remain visible:

Okay. I've taken the day to just chill a bit, but let's talk about the policy side of the Trump memo from this morning,

We normally try to maintain a positive message on here, and that includes not providing a commentary on homophobic/transphobic news pieces, but there is a point at which positivity risks becoming complacency.

Lots of people asking what they can do to fight back against the Trump administration’s planned anti-trans actions. The answer, honestly, is to elect Democrats.

Let me explain why.

Despite its cesspool-iness, Twitter undeniably acts as a vital TL;DR guide to navigating this new policy, and the #WontBeErased hashtag is a crucial artery connecting activists to civilians and voters. Currently, it’s full of useful threads simplifying the policy and its ramifications and step-by-step action plans to being an effective ally to the LGBTQ+ community.

According to NYT, this move by the Department of Health and Human Services would deny 1.4 million Americans their federal recognition and protection. Trump might not recognize transgender people, but Twitter activists and allies will.

Protestors already began gathering in New York’s Washington Square Park on Sunday night, and a rally is planned for today outside the White House. For those can’t join a protest IRL, look no further than social media for your angry crowd.

Read next: China drafts regulation to stamp out blockchain anonymity