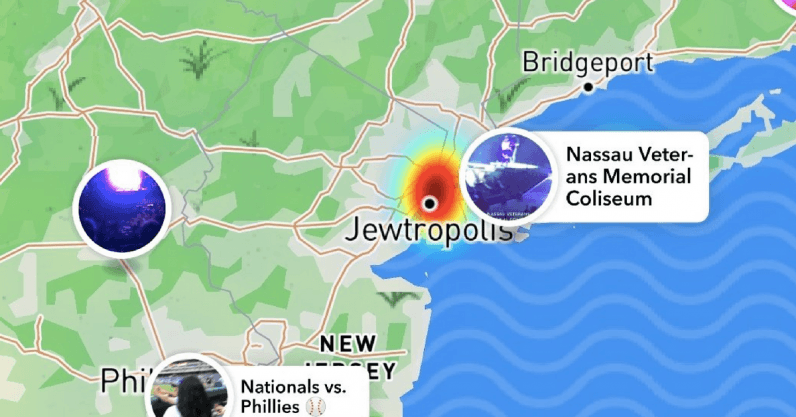 New Yorkers using apps including Snapchat, Citi Bike, or The Weather Channel will have noticed that this morning New York had been renamed “Jewtropolis” on both Android and iOS devices.

When users zoom in on Snap Maps, it shows that Snap Map has marked Manhattan’s East Village with anti-Semitic language.

The change to New York’s name appeared to be visible at 5:00am ET and by around 9:00am, the maps were in the process of being fixed.

Those that spotted the offensive hack have posted screenshots on social media with multiple users expressing their disgust over the ‘racist’ change.

Whatever mapping service that Snapchat, CitiBike, StreetEasy, (perhaps others) use — it seems — is showing New York City as “Jewtropolis” this morning. pic.twitter.com/nsVe8goLyo

Since screenshots appeared on social media, Snapchat have responded saying they are working to fix the issue, “Snap Map relies on third party mapping data which has unfortunately been subject to vandalism,” Snapchat Support said on Twitter. “We are working with our partner Mapbox to get this fixed immediately.”

@pisceschrist Thanks for bringing this to our attention. Snap Map relies on third party mapping data which has unfortunately been subject to vandalism. We are working with our partner Mapbox to get this fixed immediately.

This isn’t the first time online maps have been hacked, mainly because users can suggest changes. In 2015, Google Maps had been hacked by a user inserting an image of Google’s Android logo peeing on an Apple logo somewhere in Pakistan, according to The Verge. After this incident, Google disabled the tool that previously allowed users to make edits on maps.

Snap Maps have announced that they are working to fix this issue as soon as possible.

Read next: The BlackBerry Key2 LE is a $399 phone with a QWERTY keyboard