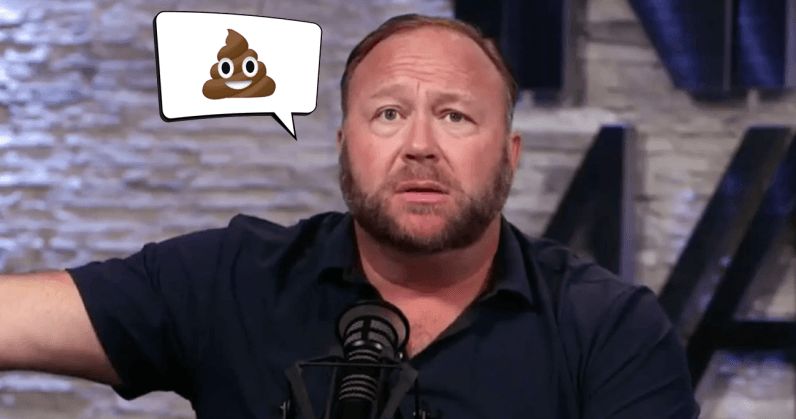 Alex Jones can’t win these days. As the unofficial mascot of conspiracy theorists everywhere, Jones — the man who answers the question: What happens when you turn human skin inside-out and continue to wear it? — has seen his beloved InfoWars brand blocked on every major platform that isn’t a microblogging site disguised as a smoldering dumpster fire.

Jones has 99 problems, currently, and the internet is the biggest of said problems, according to a botched lyrical representation of a Jay-Z song. And no, we’re not talking about his numerous pending defamation lawsuits, or even the “war on free speech” mounted by the liberal media. This isn’t about the threat of chemtrails turning him human.

It’s a Twitter campaign, started by Silicon Valley entrepreneur Shannon Coulter. While some are thrilled about Jones’ ban on YouTube, Facebook, Spotify, and other major platforms, Coulter is ensuring we’re not all repeating the same mistakes made by horror movie protagonists for decades. You know the trope, the one where vapid kids “kill” the masked scumbag only to find him pissing in their Cheerios minutes later.

Coulter wants to make sure that doesn’t happen. And in doing so, she’s continuing the ritual (figurative) beatdown of Jones to ensure he doesn’t sacrifice small children on Twitter to assume new life as a super villain.

Sunday, she sent a rather innocuous tweet asking for the whole of Twitter — or at least those with souls — to block every Fortune 500 company with a presence on the platform.

Good morning! To encourage Twitter to drop Alex Jones, I just blocked the Twitter accounts of every Fortune 500 company w/ a Twitter presence. Ready to mass block Twitter's most lucrative advertisers with me? There are three quick & easy ways. Instructions are in this thread.

It’s the type of feel-good measure one might take when wishing there were something they could do, while not really considering the general apathy of most internet users. The goal, she hints, is to put the screws to Twitter CEO Jack Dorsey, applying pressure until the platform reverses course and bans Alex Jones.

But Coulter, an industry veteran, understands the typical internet user. She’s not asking anyone to “go forth and do things” that might interrupt hot yoga, or cost more than a pumpkin spice latte. She’s calling on the internet to do what it does best: Be pissed, so long as it doesn’t take a lot of effort.

By clicking a custom link (this link) Coulter’s done all the hard work for you and promises to continue doing it until Jones is banned. The call to action asks Twitter users to click the link, smash the button that says “Block All and Subscribe” and then click the blue “Authorize App” section. In doing so, you’re blocking each of Twitter‘s biggest advertisers, without actually having to, you know, do stuff.

Once banned, if we can be so lucky, Coulter promises to unblock all the companies, meaning anyone subscribed will too. So far, nearly 50,000 people have taken up the call to arms.

It’s a small step, but I admire the forward thinking and desire to hit Twitter where it hurts. With any luck, Twitter users can use their collective power to vanquish the internet‘s biggest troll once and for all.

Read next: We talked to Overwatch League's franchise director about the future of esports