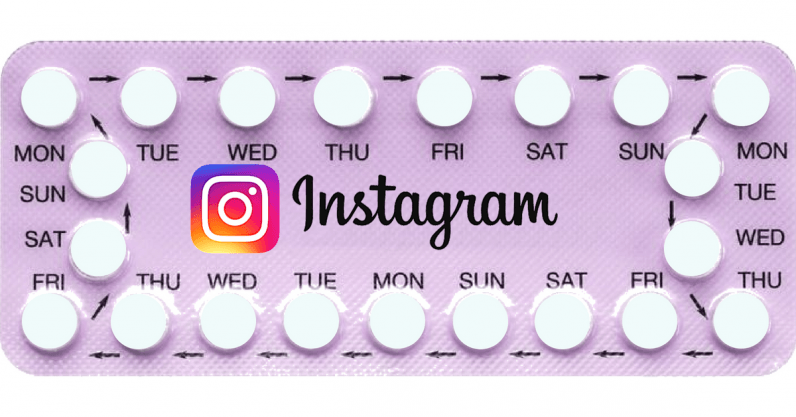 Influencers promote almost anything on social media from holidays to makeup to discount codes, and even fertility apps. Our feeds are flooded with #ad posts from influencers who are “loving” a recently released product.

But how much trust should we put into a #sponsored post? Especially when that product is contraception.

I am usually blasé about Instagram influencers. They’re pretty harmless when it comes to promoting Dior’s latest lipstick for a 10 percent cut. However, some influencers on social media don’t know enough about a certain product that they’re promoting, which could be why companies are so attracted to them.

It’s worrying to see so many young women trusting the word of an influencer over the facts when it comes to fertility apps like Natural Cycles. What’s even more worrying is that I almost fell for it too.

In addition to Natural Cycles being the most Instagrammed fertility tracking app (at least on my feed), it has also become one of the most controversial ones too after 37 out of the 668 women who had an abortion in Stockholm had been using Natural Cycles to prevent pregnancy.

The Swedish app, Natural Cycles, markets itself as a noninvasive type of contraception and costs €64.99 per year (a little pricey).

As soon as you wake up in the morning, you take your temperature with a Natural Cycles thermometer, the app then predicts if you’re fertile today based on previous information you’ve added about your menstrual cycle.

Sounds easy, right? No hormonal mood swings, no piece of copper placed in your body, no interference of your period, and it’s a cool bit of tech. Who wouldn’t be tempted by its promises?

You probably already know that there isn’t a preferable birth control option right now. Hormonal pills are a ticket for a never ending emotional rollercoaster, IUDs have to be shoved up your vagina, and anyone who solely trusts condoms (and still enjoys sex with them) is delusional.

With all this in mind, it’s easy to see why 700,000 women cancelled their repeat prescription of the pill and arranged an appointment to remove their IUDs in hope of a stress-free, non-hormonal contraception available by simply downloading an app on their smartphone.

But don’t throw away your packet of contraceptive pills too quickly. Asides from the reported unwanted pregnancies in Stockholm and the fact that this app will never be able to prevent you from contracting STDs, spontaneous sex is more or less completely off the table.

Depending on your current lifestyle, consistently and reliably avoiding sex for several days at a time during a precise and sometimes variable window each month is impossible and definitely a mood killer.

Since this app works by working out the days when you’re most fertile or not, planning sex is essential (just send your partner a Google invite for sex at 9:00pm @home).

Despite being a critical person, I almost risked being one of those 37 women who reported an unwanted pregnancy whilst using Natural Cycles.

How I was swayed towards Natural Cycles

I use Instagram for the same reason most other people do. I scroll endlessly through celebrities posts and uploads from friends I haven’t seen for years. I also occasionally share photos that pile up on my profile as squares illustrating the good parts of my life.

But amongst the endless scrolling through my Instagram feed and the odd like, there’s no getting away from the ads Instagram thinks I need to see.

As a young woman, my ads typically include: Clear Blue pregnancy tests, period tracking apps, and apps like Natural Cycles.

It’s either: ‘Could you be pregnant?’, ‘Do you even know when your next period is due?’ and ‘If you’re not pregnant, could you be infertile?’

It’s like being a woman today doesn’t come with enough pressure from social media?

All the sponsored posts and pretty flat lays of Natural Cycle’s thermometer chipped away at my logical thinking and I started to consider taking the ‘natural route’ of contraception.

If Natural Cycles doesn’t manage to worm its way onto my feed through sponsorship, its aggressive method of using influencers sure works. On this particular #sponsored post, I saw a candid shot of a young woman checking her temperature with the Natural Cycles app.

Let’s talk natural birth control for a minute! Have you heard of the @naturalcycles app? It’s the only cycle tracking app + thermometer that’s been approved as an effective form of contraception and I love it! 20% off link in bio. 〰 I take my temperature every morning and enter it into the app. The algorithm is designed to learn my cycle & predict the best times to make love and when to be extra safe. 〰 If you’ve been following Heather and I here for a while, you probably already know how much we value our relationship to our own moon time, and how passionate we are about helping other women connect to their power through their cycles. 〰 The synthetic hormones in the pill alter our mate selection by changing how we pick up scent on a mate meaning we might not be selecting an optimal genetic match for the future because our bodies already think we’re pregnant. You can see how this would cause potential attraction issues once off the pill. 〰 As a teenager I tried taking the pill for bad cramps and it made me crazy! I gained weight, had mood swings and even worse cramps. While there is a small % of women who do benefit from the pill, there’s a majority out there who don’t. ~ I use Natural Cycles app + thermometer, cervical mucous tracking + ovulation tests to pinpoint my cycle and prevent pregnancy without putting synthetic chemicals into my body. This is the choice that feels best for me, but there’s absolutely no judgment if something else works for you. 〰 As a birth worker, I take the same stance with contraception that I do with making a birth plan – I respect and honor whatever choice you make as long as it’s coming from an informed place. So many of us aren’t informed about the risks we’re taking when we put something into our body. I’ve personally found that knowing my cycle opened up so many doors for me as a woman. My life just flows more smoothly because I’m in sync with my internal shifts happening from week to week. 〰 Comment below if you’d like us to write or video blog more about Natural Birth Control methods and understanding your fertility cycle 💗 〰 Shay 📸@risingwoman . . . #naturalcycles #fertility #naturalbirthcontrol #risingwoman #empowered

This post is one of hundreds that are thoughtlessly littered on women’s Instagram feeds every day. A search of #NaturalCycles will inevitably bring up dozens of the same kind of flawless and fresh-faced influencers promoting this fertility app with the thermometer stick hanging from their mouths.

These posts made me (and probably thousands of other women) consider throwing away the pill and downloading the app. It all looked so easy, and even beautiful. I wanted to be a part of this and be in complete control of my body (for once in my adulthood).

I would use this app in the same way as I use most of the technology in front of me right now, I’d give it all my data, trust it fully, but never really understand how it works.

I decided to do a little research…

Even though I was pretty much convinced by Natural Cycles’ message, there was a faint voice of reason somewhere in the back of my mind, so I decided to consult my doctor first.

When I asked her about Natural Cycles, it was a hard ‘no’, unless I wouldn’t mind so much if I got pregnant (I would absolutely fucking mind). So why are influencers marketing this app as a form of contraception instead of an app for planning pregnancy?

I walked away from my doctor’s appointment feeling naive after falling victim to Natural Cycle’s thoughtless marketing strategy. It sold me the dream solution of birth control but prior to this, I had never fallen for buying an insanely expensive makeup product advertised by an influencer, but when it mattered most, I almost bought into a #spon post that could’ve risked my future.

Fertility apps are been unethically advertised as a ‘one size fits all’ through irresponsible influencers that could be selling a product that they themselves have never used.

In an interview with Elina Berglund, CTO and co-founder of Natural Cycles, she said her ideal user of the app would be a woman who is planning to have children at some point, but wants to take a break from hormonal contraceptives until.

One of Berglund’s researchers, Gemzell Danielsson, addressed how Natural Cycles is not a good option for women who absolutely want to avoid a pregnancy.

Somehow, Danielsson’s research has been lost in translation through Natural Cycle’s influencer strategy. Companies and influencers alike should take this as a wake up call to stop dressing up potentially life-changing products just so it matches their perfectly arranged Instagram feed.

Read next: Scientists are using solar powered MP3 players to fight diarrhea in the rainforest