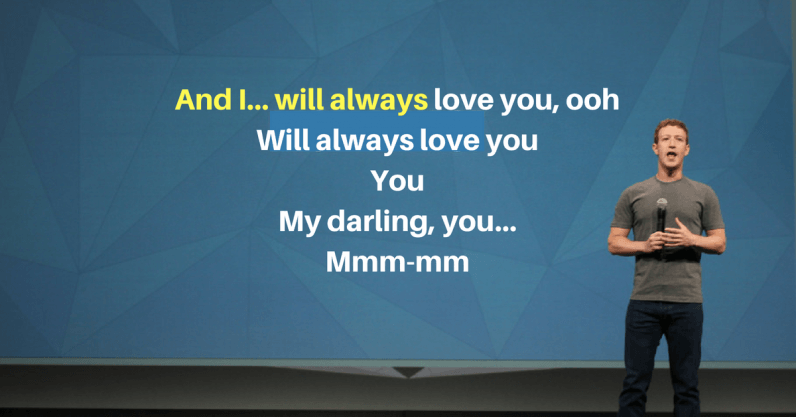 Researcher and code-breaker Jane Manchun Wong found a code which indicates that Facebook may introduce a ‘Talent Show’ feature where users would make use of Facebook’s recently added music partnerships by recording themselves singing and submitting their audition for review amongst other users on the platform.

Facebook is working on Talent Show where users can pick a popular song and submit their singing audition for review.

If this feature gets the all clear, it’s probably bad news for musical.ly, an app which allows users to record themselves singing for 15 seconds and then upload and share the clip within the app for other users to discover.

This wouldn’t be the first swing Facebook has made at musical.ly since earlier this year, Facebook confirmed music licensing deals with all major labels like Universal, Sony, and Warner. This means any videos uploaded on Facebook featuring music from these major labels will not be taken down over strict copyright issues.

As well as owning the rights to showcase most popular songs, Facebook also introduced a lip-syncing feature in June. The ‘Lip Sync Live’ lets users mime over their favorite song on a live broadcast, which is what musical.ly was built on.

Although this feature will inevitably not appeal to everyone on the platform, my pop star dreams seem more like reality as it could be used as a way for new-talent to be discovered online. Just like Justin Bieber was discovered on YouTube…

The ‘Talent Show’ feature has not been confirmed officially, but it hasn’t come as too much of a surprise. Facebook is notorious for introducing features used on other platforms like Snapchat‘s stories and face filters.

It’s to be expected that Facebook will take on musical.ly and any other platform offering something Facebook doesn’t currently have.

Read next: Google wants to bring free Wi-Fi to Nigeria next year