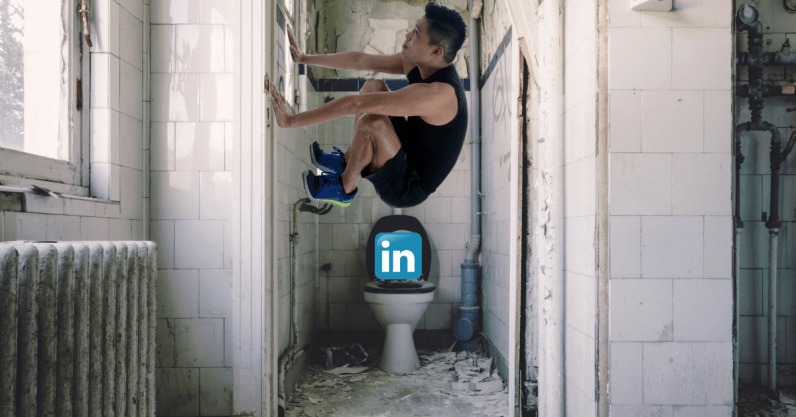 LinkedIn is a unique kind of toxic nightmare.  The type that, if it were a real city or town, would be the desolate setting of a video game where you blast its mutated inhabitants with railguns.

Highlighting the weapons-grade twattery of the residents of LinkedIn-upon-Thames is my current favorite Twitter account, @craponlinkedin, which wades through the worst content on the world’s biggest professional networking site, and resurfaces it for our own personal amusement.

It’s a hard job, but someone has to do it, and believe me when I say it’s bad. If you thought broetry was as bad as it got, you’re sorely mistaken.

Usually, Crap On LinkedIn‘s posts can be grouped into three distinct categories, all profoundly awful in their own way.

The first I like to call “that happened.” You know those emails you get from elderly relatives that talk about “Marine Todd” or Einstein debunking atheist/liberal/communist/ACLU-member college professors? Well, there’s a version for douchebags with job titles like “business coach” and “management consultant.”

These insipid stories have an equally shaky grounding in reality, and are designed to inspire their fellow morons.

Quite often, these bullshitsickles involve the poster’s offspring saying stuff that’s beyond their years (possibly because it never actually happened).

Overall, the worst content on LinkedIn is designed to be inspirational. That said, there’s a distinct category that just doesn’t make sense whatsoever.

Because we all know a type of tree that grows "books" and "grams" #LinkedIn pic.twitter.com/XxWwIRsKol

As former TNW writer Mic Wright asked, how much of a gram do you have to snort before this make sense? I’d wager the whole bag.

(By the way, Mic is funny and extremely witty, and if you’re not following him on Twitter, you’re missing out.)

And then finally, you’ve got the humblebrag. This takes many forms, and it’d take too long to go through them all.

My favorite is the one that’s just bereft of any self-awareness whatsoever. Take this guy, who humblebrags about $1 million, but ultimately goes on to talk about how he lost it all and ended up working from a Starbucks.

if this is true you are literally an idiot AAAHHH I HATE LINKEDIN pic.twitter.com/oUWdSgN8ye

“Everyone congratulated me.” What, on how much of a massive gobshite you are?

And then you’ve got the #hustlers, like this “success coach” who’s successfully #hustling from the type of sketchy-looking car park that wouldn’t look out of place in a grime music video.

This geezer is networking in Horsham by a bin in a pub car park. My day doesn't seem so bad any more. @CrapOnLinkedIn pic.twitter.com/kkqGR4MFyP

In conclusion, LinkedIn is iredeemably awful, and maybe one day its founders will be tried in the Hague for crimes against humanity.  CrapOnLinkedIn is doing the Lord’s work in bringing this to light.

Read next: Researchers teach AI how to win at shooters (without cheating)