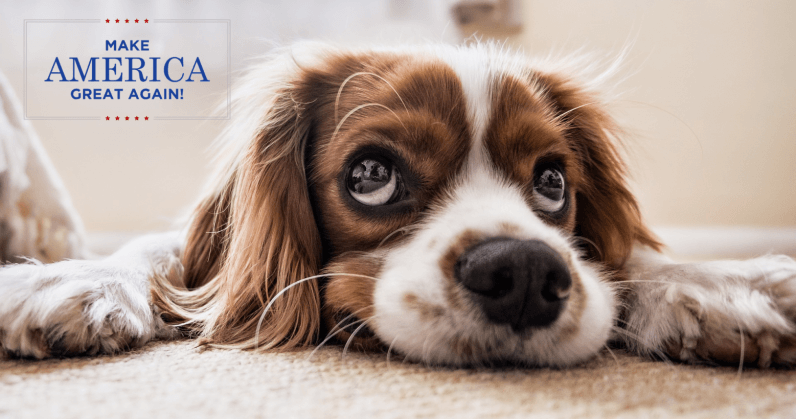 I’ve never bothered to ask my dogs about their political leanings. Gun to my head, right now, I couldn’t answer whether my beagle was for or against capitalism. I’m not sure how she feels about trickle down economics, or if she’s even aware of who Saint Reagan is.

Or, maybe I just don’t give a damn.

As a writer who routinely covers some of the dumbest shit in existence, I may have met my match in a Twitter account where each of its 8,000 members presume to know the political leanings of their dogs. And these dogs, according to their owners, are red, white, and blue-wearing, gun-toting, god-fearing conservatives. #MAGA

DM us your pet pics. No liberal pets please. 😊

Started earlier this month, Conservative Pets is the ultimate eye roll to the partisan world we live in. It’s easy to believe it’s satire, but at this point we just don’t know. We live in weird times. It could be cheeky commentary, but it’s just as likely to be a middle finger to snowflake liberals triggered by a dust mop in a MAGA hat.

His name is Lincoln. pic.twitter.com/OSwgyE3819

The reality is, I’m not even sure it matters. Even if the account were born of a liberal desire to poke fun at the divided nature of the country, the followers who latched on to it seem to be predominately of the conservative variety. Life could be imitating art — assuming this was ever art to begin with.

I’m scratching my head, grasping for meaning. But perhaps there is none. Maybe this is real. Maybe we live in a world where our furry friends really do cling to capitalist beliefs while carrying on about how “liberalism” is a disease and climate change is a hoax. Maybe Fido doesn’t want your goddamn treats, but sure wouldn’t mind some .223 ammo for his AR-15 and a twist of the volume knob when Uncle Ted fires up the axe in his 1975 classic, ‘Stranglehold.’

Is it really that far-fetched? I don’t know anymore.

MAGGY is on the Trump Train! pic.twitter.com/DDZtgOZk4S

Martini has been a “supporter” of #TheWall for years pic.twitter.com/xOqDt6oxC6

What I do know is that if “liberalism” is a disease, its symptoms don’t include posting pictures of their dogs, adorned in all levels of patriotic accouterment, on a Twitter account devoted to Bernie Sanders or Hillary Clinton, at least not yet.

Read next: Time crystals could be the miracle quantum computing needs