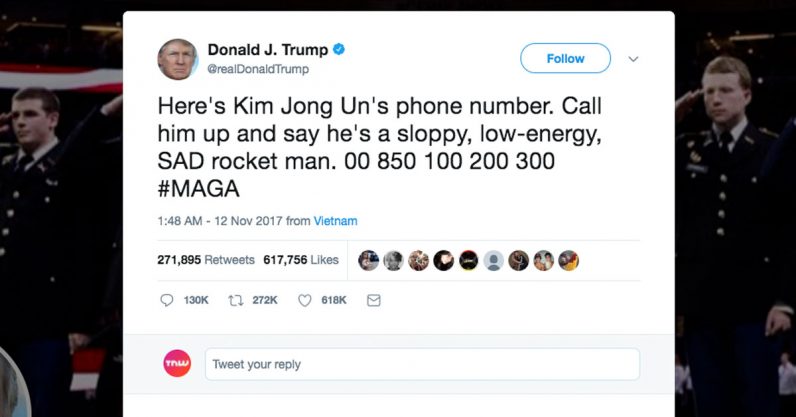 Speaking on BBC Radio 5 Live’s Emma Barret Show, Twitter’s European chief, Bruce Daisley, said that if President Donald Trump tweeted out the personal information of a political adversary, the social media giant would “caution him to remove that tweet.”

“If someone tweets private information, if someone tweets someone’s private address, phone number, then they are no-go areas where we don’t permit that. So in those instances, what we often say is we ask for that tweet to be removed,” said Daisley.

When asked if this rule would apply to Trump, Daisley confirmed that would be the case.

Twitter — and particularly the company’s co-founder and CEO, Jack Dorsey — have found themselves in a maelstrom of criticism over charges the company selectively applies its terms of service. It has been argued that some tweets — like the one where he compared nuclear buttons with North Korean dictator Kim Jong Un — are tantamount to violent threats.

North Korean Leader Kim Jong Un just stated that the “Nuclear Button is on his desk at all times.” Will someone from his depleted and food starved regime please inform him that I too have a Nuclear Button, but it is a much bigger & more powerful one than his, and my Button works!

Despite that, Twitter is adamant it will take no action to formally remove Trump from the service. In a blog post published January 5, a company representative wrote:

Blocking a world leader from Twitter or removing their controversial Tweets would hide important information people should be able to see and debate. It would also not silence that leader, but it would certainly hamper necessary discussion around their words and actions.

They added that all flagged tweets are examined within a “political context.”

By recognizing that there is a line in the somewhere, Twitter goes some way to establishing that Trump doesn’t have carte blanche on the platform.

It could also be viewed — quite cynically, I might add — as Twitter preparing itself for the possibility of Trump tweeting out an opponents phone number or address.

A hallmark of Trump’s use of Twitter is infantile insults (like Pocahontas, Lyin’ Ted, Sloppy Steve Bannon, Crooked Hillary, Low Energy Jeb) hurled at those he disagrees with, or perceives to have wronged him. It doesn’t seem out of the question that, in the eventuality that he finds himself in another spat, he could escalate.

In that scenario, Twitter says it would step in.

Read next: Everything you need to know to get started with cryptocurrency investing