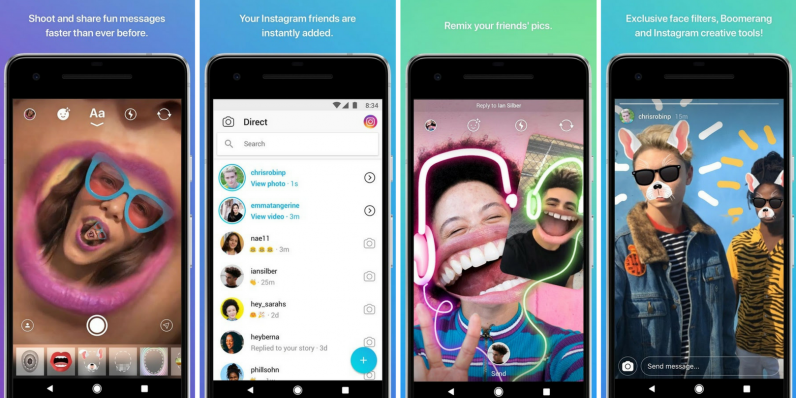 Photo-sharing service Instagram is working on an spin-off messaging app called Direct, which could one day remove the built-in direct message service in the mainstream app.

Although pretty barebones, there’s a little to get excited here. When you open Direct, it goes straight to the camera — perhaps in an effort to condition you into creating and sharing content. You can also look at your profile and settings, and view and send messages to other Instagram users.

According to The Verge’s Casey Newton, the raison d’étre behind this app is that Instagram believes messaging can never truly shine when it’s tethered to something else. So, rather than half-ass it, it’s going create a distinct messaging product that can thrive away from pictures of people’s lunches and cats.

That makes sense. Just look at Facebook Messenger, which was first released in 2011, and made the default mobile messaging experience since 2014. Facebook Messenger has expanded massively, and has come to include things like video chatting, games, payments, and much more. It’s a vastly better experience than the previous product, Facebook Chat.

Direct is available from today in Israel, Italy, Chile, Portugal, Turkey, and Uruguay, on both Android and iOS. It’s not uncommon for social giants to test out new products in smaller markets. Facebook recently launched its Houseparty clone Bonfire in Denmark, rather than go to the hassle of doing a broader launch.

If you’re able to download Direct, you should note that it removes the inbox from the mainstream messaging app. If you’re comfortable with what you’ve got, perhaps consider giving it a miss.

So, what’s Instagram’s endgame? It’s not clear. In Newton’s interactions with Instagram, they made it pretty clear the app is merely an experiment. So far, there are no concrete plans to expand coverage to the rest of the world

But if Instagram pulls it off, it’ll have executed quite the coup. For starters, it’s another big step in Instagram’s metamorphosis from photo sharing site, to broader social networking platform. But also, it would have introduced something distinct and exciting in a messaging marketplace that’s staid and stagnant.

Bravo. I really hope it works out.

Read next: Dutch toilet startup built a smart urinal that serves ads while you pee