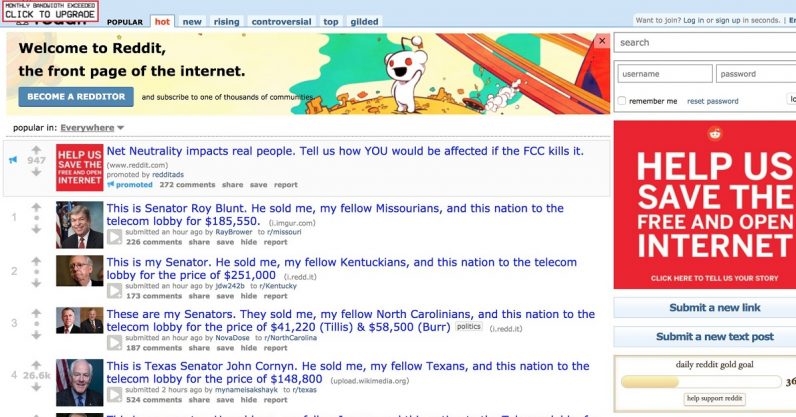 Reddit is today joining the discussion about net neutrality, as most of the front page is plastered with posts and ads about saving the “free and open internet.”

You might have noticed something a little different about Reddit this morning. We're running #NetNeutrality ads across our site to raise awareness for the fight to save the free and open internet.

Share your story and see what you can do here: https://t.co/6ONXZaQY8a pic.twitter.com/FMZi2dBfl3

Along with a series of posts about various US government officials and ads about the topic, the Reddit logo appears to load very slowly and is covered with a sign that says, “Monthly Bandwidth Exceeded, Click to Upgrade.” This is a reference to the common fear that ISPs will arbitrarily slow sites down, forcing them to pay for faster access.

The ads, along with the pinned post on the front page, lead to a Reddit post titled “An update on the fight for the free and open internet,” written by Reddit co-founder Steve “spez” Huffman. In it, he gives some information about Reddit’s interest in the issue, and what the community can do to participate in the discussion.

Among other things, he thanks Redditors for their enthusiasm:

In just one week, you made 50,000 unique posts and over 350,000 comments related to net neutrality, generating over 21 million votes. While Tuesday’s news hits close to home, we are grateful that the Reddit community cares just as much about net neutrality as we do at Reddit HQ.

This is the latest in what’s becoming an online tradition of sites taking a day to protest the repeal of net neutrality laws. Earlier this year we had a Day of Action in which several of major websites participated. Redditors have also come out in support of net neutrality in droves since the announcement of its planned repeal last month.

The official vote on net neutrality will take place on the 14th of this month. The five commissioners are expected to vote along party lines.

Read next: AI and the future of drones