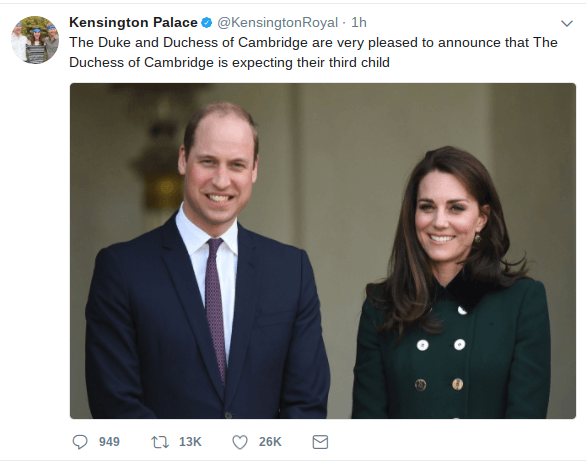 Oh good. Another one.

This morning, Kensington Palace announced that Kate Middleton, wife to Prince William, is pregnant with her third child. While it didn’t disclose when the baby is due (presumably within the next nine months), one thing is for certain: the news cycle, and therefore Twitter, is about to get really, really annoying.

Nothing against Kate or Will. I just remember the last two.

I remember watching vox pops of corn-fed Midwestern tourists who had flown to the UK just for the chance of a momentary glimpse of the new Royal Sprog. I remember the endless speculation about the baby’s gender and name, and the incessant reporting about betting odds — as if William Hill and Paddy Power had a clue, and weren’t just making wildly uninformed guesses like the rest of us.

Twitter was many magnitudes worse. I remember the hashtags. I remember the oh so hilarious jokes about how it shouldn’t be called Shaniqua, as if that was ever a possibility. I remember the awful #royalbaby branded tweets, as companies waded ineptly into the fray in the vain hope of making it into a Buzzfeed listicle (which gladly obliged). Over 1.1 million people tweeted about Princess Charlotte. You couldn’t escape it

I don’t want to piss on anyone’s bonfire. I know a lot of people are genuinely excited. That said, I’m a curmudgeonly republican, and I’m just not all that bothered. Thankfully, for people like me, there’s salvation. Here’s how you optimize your Twitter account for the upcoming royal baby. Hint: it involves the use of muted words.

Read next: Facebook code makes for 16% of the average site… and that’s a problem