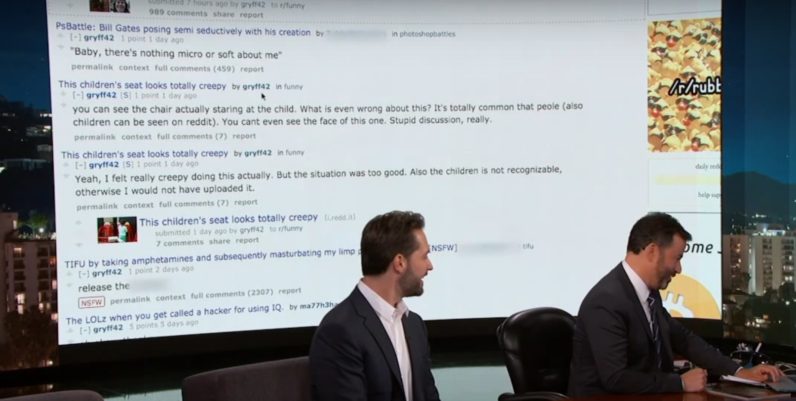 The user, Gryff42, said they were surprised enough when the post — which claimed to find a dog that looked like William H. Macy — hit the front page; but the spotlight got brighter as their Reddit history made an unwitting guest appearance on Jimmy Kimmel Live.

Well I hardly ever post filthy stuff but I commented on a NSFW TIFU a few days ago and I think Jimmy thought it was my submission at the short glance he took. Keep in mind they even named and showed my username – he made it look like there was a lot of filthy stuff going on in my history so this was quite embarrassing for me and Im getting a lot of crazy messages now.

Gryff appears to be fairly sanguine about it, but it can’t be comfortable to have your history revealed to the world so publicly. Still, given that he didn’t have their actual name revealed, I’d say they dodged a bullet.

Still, life lesson for my fellow Redditors: careful what you comment on. You never know when it could end up on national television.

Read next: How to stop VoIP issues from ruining your sales engagement strategy