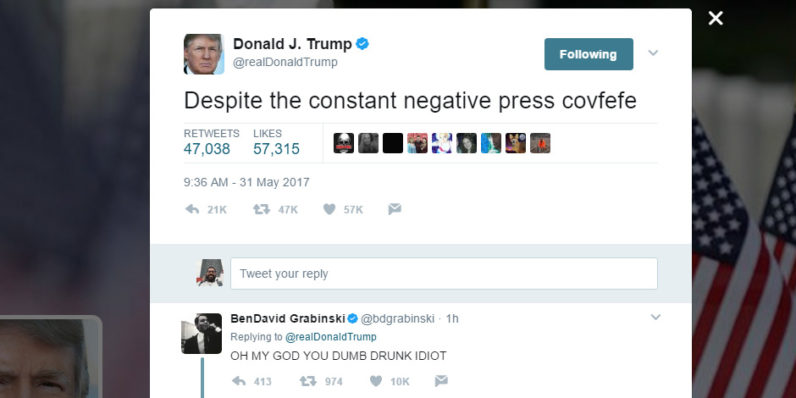 We again have President Donald Trump to thank/blame for our latest, greatest meme. Thanks to him, the internet spent a day losing its collective mind over covfefe.

In case you’ve been in a coma, this all started because Trump tweeted something in the wee morning hours that appeared to be a typo:

Despite the constant negative press covfefe

Everyone waited for him to delete the tweet and finish his thought. And waited. And checked their watches.

It's been five minutes. What if this is it. That is his final tweet & the rest of history stops.

The tweet stayed up a total of six hours. And in the interim, the internet had a field day.

Finally figured out what Bill Murray whispered in Scarlett Johansson's ear at the end of "Lost in Translation" #covfefe pic.twitter.com/fDFJUYlEz8

Fanning the flames somewhat was Sean Spicer, whose response to “covfefegate,” according to CNN, was, “The president and a small group of people know exactly what he meant.”

Urban Dictionary quickly hit upon the most-likely definition of the word: “When you want to say “coverage” but your hands are too small to hit all the letters on your keyboard.” Senator Al Franken says it’s a Yiddish term for “I gotta go to bed now.” Huffington Post wrote a breathlessly satirical article about the meaning of “covfefe” in the native Samoan language (hint: it doesn’t have one).

Hilary Clinton joked at a Recode interview that covfefe was “a hidden message to the Russians.” She also mocked Spicer’s explanation:

Ah, the small group explanation. You don’t have a high enough classification to know what covfefe means.

Meanwhile, Twitter kept the joke going the whole day. A fight broke out between wizards, because of course it did:

STAND DOWN WIZARD. THE ORB IS MINE FOR THE TAKING. BE OFF WITH YOU SO THAT I MAY ASK THE ORB MASTER WHAT HE REQUIRES OF ME.

People were bothering Merriam-Webster for the definition:

…but the dictionary was just as confused as we were:

As for Trump, he seems to be taking the jokes with good (if trollish) grace:

Who can figure out the true meaning of "covfefe" ??? Enjoy!

Read next: Elon Musk threatens to break up with Trump over Paris climate deal