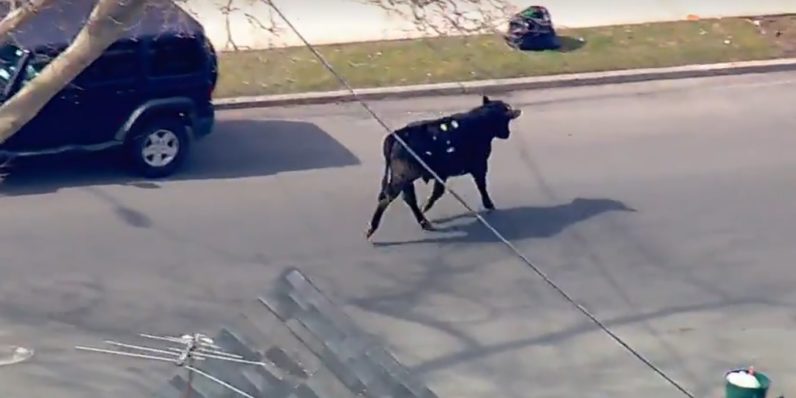 A runaway bull in Queens got millions of views on Facebook Live during its short stint of freedom.

The New York Times reports the bull escaped from the Aziz Slaughter House in Jamaica at 10 a.m. and was spotted 20 minutes later by frantic 911 callers.

Within minutes, a news helicopter had spotted the bull, and the footage was streamed to Facebook Live. At the time of writing, the ABC7NY broadcast had been viewed over 1 million times. Live footage of the bull’s capture on CBS New York’s Facebook page had over 23,000 views.

Twitter also lit up with videos, pictures, and reported sightings of the bull. It charged people and cars wherever it went, even prompting NYPD officers to yell “Everybody run!” when it pushed past a blockade.

Got vid of bull escaping from cops in Queens from a nearby slaughterhouse. "move! Everybody run!" a cop yelled @NYDailyNews @NYDNVideo pic.twitter.com/earTQiOGHJ

A New Jersey Animal Sanctuary agreed to take the bull, but sadly, it died of its injuries after being recaptured. At least ABC7 gave it nice little Twitter memorial.

Rest in peace, Queens Bull. We hope you're running wild and free in heaven's pastures! pic.twitter.com/nbIn8hFsPL

Bull Captured After Leading Police On Chase In Jamaica, Queens Has Died on CBS New York

Read next: Live MLB games could be coming to Facebook