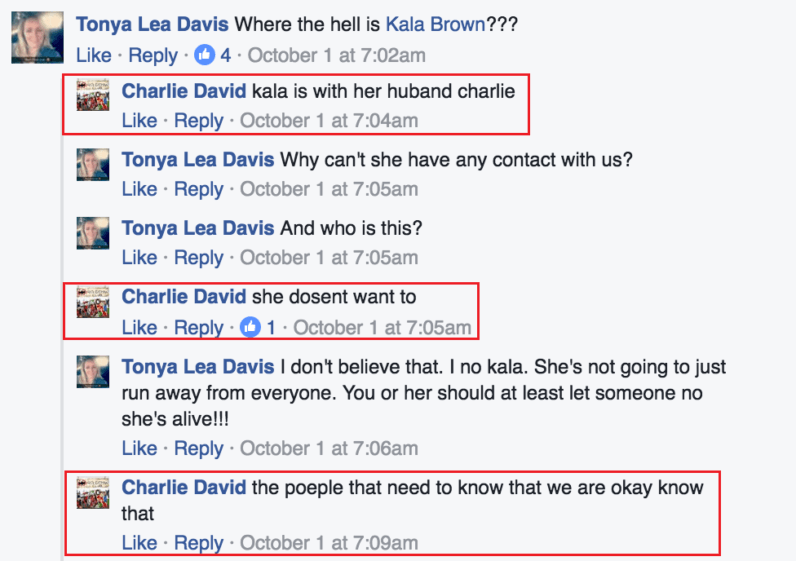 Security footage shows Charlie Carver leaving work on August 31. After leaving, he and live-in girlfriend Kala Brown were scheduled to have dinner with Lindsey Mayson, a friend of Brown’s who had yet to meet Carver. She told The Daily Beast:

That’s what that Thursday night was supposed to be about. It was meeting them and having dinner with them and getting to know each other.

Neither made it to that dinner.

Friends and family haven’t heard from Carver or Brown since. The couple’s phones were off, their 2002 Grand Prix was missing, and the front door was unlocked. Inside, Brown’s contact lenses and glasses were sitting untouched, as were their prescription medications. Perhaps even more odd, the couple’s Pomeranian ‘Romeo’ was left inside without food or water.

“That dog is her baby,” Brown’s mother, Bobbie Newsom told Dateline. “She’d never leave him like that.”

Police followed what few leads they had. Still, two months later, they’ve yet form a theory as to what happened or pinpoint a suspect. Disappearances happen all the time, and while odd, nothing shows the couple left the home under duress. Then again, evidence doesn’t point to an impromptu vacation, either.

It’s a mystery. And the mystery got a little stranger on September 1 when Charlie Carver’s Facebook page came alive with a new message that he and Kala had gotten married.

A week later, the account became active again, posting a message that stating the couple was fine. The post was later deleted, according to those that managed to snag a glimpse.

Carver wasn’t an active Facebook user, according to friends and family. His Facebook page, however, got a lot more lively in the subsequent weeks. Strange images, violent memes, and messages seemingly related to the disappearance (and other missing people) just kept appearing without explanation.

His mother claims that he never was one to post meme images, yet the postings are dominated with them of late. Weirder still, the page is responding (on occasion) to comments.

The Daily Best even obtained messages the account has sent to friends.

There’s no clear-cut answer on who is currently in control of the account.

Some of the commenter’s believe it’s Charlie’s ex-wife, while others are convinced it’s Charlie himself. Local police Lt. David Creamer confirmed that he doesn’t believe his office has attempted to contact Facebook to discover who’s behind these postings. “To do anything like that, we’d have to issue a search warrant to Facebook,” Creamer said. “I don’t know if we’ve done that but I’m pretty sure we have not done that. … You’d have to serve [Facebook] with a search warrant to search their records for an IP.”

For now, it remains a mystery. A mystery the local police don’t seem to be all that concerned with getting to the bottom of.

Read next: Murder Mystery Bot is all the fun of a group date without having to put on pants