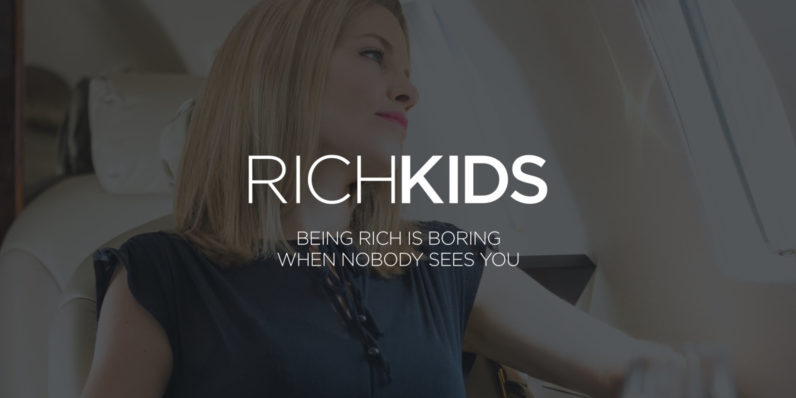 The appeal of social media is largely its inclusivity. Whether it’s Facebook, Twitter or Instagram, anyone with a smartphone can open an account free of charge and start posting immediately. This isn’t what Rick Kids is about.

Launching today, Rich Kids is the self-proclaimed “world’s most exclusive social network” – and it certainly lives up to these claims. Unlike regular social networks, the website aspires to offer the well-off a platform unspoiled by the sight of poverty by taxing its users for the right to post.

Even if you had that kind of money, why would you want to pay? According to Rich Kids, the inclusivity offered by social networks like Instagram is ultimately making it difficult for the wealthy to “stand out” from the rest of the crowd.

Instead, Rich Kids promises to get the affluent the shine they “deserve” by making its platform virtually unaffordable to anyone else.

This is not to say that the poor won’t be able to peek at the barrage of opulence shared by Rich Kids premium members – they just won’t be allowed to post photos from their own lives.

Here’s how they put it in their mission statement:

We created something different. A new social network where our members can really stand out and be visible in an elegant and meaningful way. Share their life with other users and build a true fan base. Only members of Rich Kids can share photos. To become a member user has to subscribe to Rich Kids Membership. To ensure the quality and exclusivity of our members the membership is set to be $1,000 per month.

What’s particularly sickening about Rich Kids is how the service is trying to sell itself under the disguise of charity. According to CEO Juraj Ivan, a third of the grossly overpriced membership will go to the “education of poor kids.”

There’s nothing wrong with charity, but the blatant display of luxury Rich Kids is designed for hardly counts as an act of generosity. This is not a benevolent initiative; it’s merely a platform for the rich to flaunt their wealth and for the poor to window-shop.

Rich Kids claims it will give its members an opportunity to better communicate with their followers, but this isn’t what social media is about.

What makes social networks great is precisely the fact they offer users equal opportunities to voice their opinions. It’s the belief that someone is actually listening to us that essentially keeps us coming back to Facebook, Twitter and Instagram.

The exclusivity that Rich Kids so openly takes pride in simply kills the social aspect of the platform.

True, there’ll probably be a few assholes with fat pockets that might indeed pay Rich Kids’ excessive membership rates. Still, no social network can last in the long run without a devoted user base – and Rich Kids will never have one.

Because when freemium users get bored of looking at expensive shit, they’ll simply leave – and Rich Kids will become just another website flushed with images of opulence that nobody wants to look at anymore.

Still want to take a peek at Rich Kids? Go check the social network for loaded snobs here before it inevitably fades into oblivion a month from now.