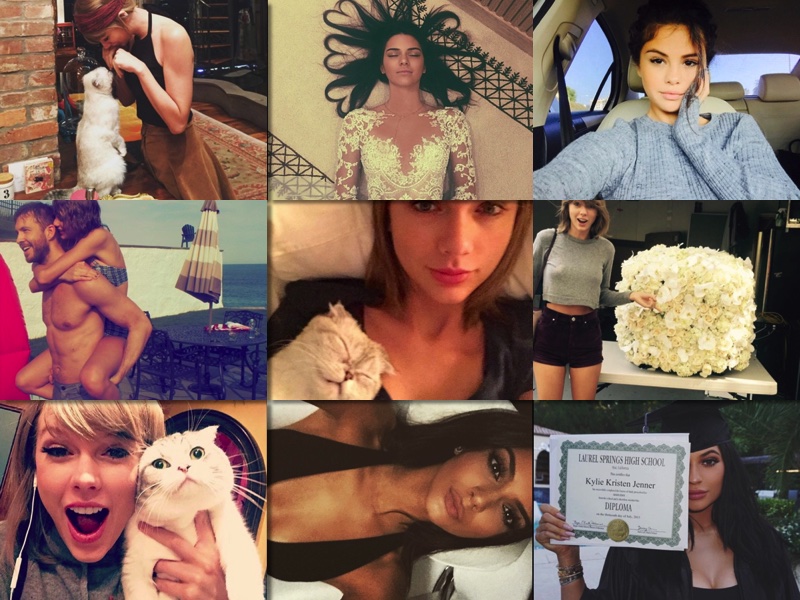 With the end of every year tech companies produce a slew of round-ups attempting to distil the past 12 months into a neat and tidy data-driven package. Spotify has done it, so has Google. Instagram too joined the bandwagon with its most liked photos.

But instead of just re-publishing the 10 photos that users of the social network went crackers over, I wanted to try to find out what it says about Instagram and the Web more generally. Why did the following ten photos of female celebrities mean more to us than anything else that happened in 2015 on Instagram?

Model and TV personality Kendall Jenner received 3.3 million likes for this photo posted in the summer

“The first thing that strikes me is that Instagram has the lowest age range in terms of demographic,” says Dr Kirsty Smedley, a consultant clinical psychologist at The Priory in London. According to Sprout Social, more than half of Instagram users are under the age of 30. In addition, the social network skews in favor of female users. In comparison, Twitter is used more by men under 30.

“The female celebrities in these photos are incredibly popular with adolescent girls,” continues Smedley.

But, says Pete Trainor, director at Nexus a design firm that uses psychology to create digital products, Kim Kardashian and Justin Bieber (with 55 and 49 million followers respectively), two celebrities at the heart of adolescent female culture with colossal followings, do not feature in the top 10. So what makes these 10 special?

“The images of Kendall Jenner and Beyonce are incredibly stylised, polished photos that are deeply aspirational in terms of projecting an image of flawlessness,” says Smedley. Jenner, laying on the ground in a wedding dress and her hair in hearts is an invitation into her private world, but one that has been very carefully crafted. The image led to a trending hashtag #hearthair, which saw nearly 10,000 fans from around the world sharing their own attempts within days of the post going live.

Taylor Swift’s images on the other hand represent the other end of the spectrum. With five of the ten most popular images coming from the pop singer, she appears to have found a way of communicating with her audience in a more meaningful way than anyone else on the list.

A shot of Taylor Swift with boyfriend Calvin Harris raked in 2.5 million likes.

“Many of the images of Taylor Swift are photos that her fans would take themselves,” says Smedley. Images of the star at home, on holiday offer a degree of normality that her audience can identify with and even emulate. “It gives the person viewing them more of a sense of an intimate relationship with the celebrity.”

Taylor Swift’s photos offer up an image of the singer as someone who wants to include her fans in her journey. “The image leaves tantalising clues about the details of their holiday. What’s on the table behind them? What are they laughing at? These are all things to be interpreted and debated by the young women that look up to these people.”

Jenner’s sister Kylie Jenner received 2.3 million likes for this photo of her graduation

The Kardashians, however, don’t do that. Kylie Jenner, seen here receiving her diploma, is a meticulously managed photo. “Kylie has branched out into selling hair, nail and make-up products and these images are powerful advertising opportunities,” explains Smedley. Indeed, it was revealed recently that stars like Jenner can add up to $300,000 to their bank balance by wearing items on behalf of different brands. However, despite this image being just an ad campaign it stirred strong emotive feelings of support from her fans.

This photo of Beyonce with daughter, Blue Ivy was liked 2.3 million times

Beyonce, on the other hand, shares the same ideas of perfection but maintains an enforced distance with this professional photo of the singer with her daughter. When Pete Trainor ran the images through image recognition AI software it noted that all the images in the top 10, especially the above, feature an abundance of white.

According to color theory, “white is associated with light, goodness, innocence, purity, and virginity. It is considered to be the color of perfection. White means safety, purity, and cleanliness. As opposed to black, white usually has a positive connotation. White can represent a successful beginning. In heraldry, white depicts faith and purity.”

As the Guardian pointed out earlier in 2015 when commenting on Beyonce’s second appearance on the front page of Vogue, “Image control is not a joke to this woman, who has built a career on a winning combination of seemingly southern warmth, unattainable sensuality and a back-breaking work ethic. She stands alone as a sort of pop enigma.”

Beyonce’s most popular photo appears to encapsulate all of those ideas.

Taylor Swift received 2.3 million likes for this photo with her pet cat, Meredith

Of the five photos Swift has in the top ten, three feature her cat, which Trainor says, is deliberate.

“Swift is a master manipulator. She’s got celebrity down to a fine art now, appearing normal, but using props to her advantage. Made evident by the reoccurring cat. She uses props to tell stories. The public love stories, They help break down the barrier [between celebrity and fan] and [help] surface primitive emotions.”

It’s precisely this use of narrative that makes these images so compelling to young people, says Smedley. “Because of this intimacy it feels very real to young people and there’s a sense that they have an active role to play in these people’s lives.”

A picture of Selena Gomez in her favorite sweatshirt received 2.3 million likes

That role for Selena Gomez appears to be solidarity. The musician has been dogged by the relationship she had with Justin Bieber – and the subsequent media attention that ensued as a result. Refinery29 has a particularly good account from Gomez herself on how she feels about her life in the limelight.

In this selfie taken inside a car, Gomez stares into the camera lens, hand gently cupping her face. “She’s vulnerable and the hand on her face accentuates this,” says Trainor. “This photo says ‘I’m in my car, a cocoon, I’m casual and hiding my celebrity from the world [while still letting you in].”

It’s a subtle form of story-telling, but one that catapulted this picture into the top ten.

Taylor Swift took 2.4 million likes for this photo of her and pet cat. The caption read, “Meredith is allergic to joy”

Another cat selfie from Taylor Swift. This one garnered 2.2 million likes

So what have we learned?

Rounding out the Top 10 is Kendal Jenner thanking fans for helping her reach 20 million followers. The photo received 2.2 million likes

Kendal Jenner takes the top 10 spot with another seemingly casual shot that has all the hallmarks of the first image: a polished photo of the star in an intimate setting.

From looking at these 10 photos there seems to be a dividing line. On the one-side is the hum-drum, everyday inclusivity of Taylor Swift’s photos: the shots of her at home with her cat or on holiday with her partner. On the other side is the polished perfection of the Kardashian clan. So what does it say about us?

“It depends on what we aspire to as individuals. Do we aspire to softer moments like Taylor Swift on holiday, or do we try to emulate the image of perfection and using social media to portray the best version of ourselves?” concludes Smedley.

There is a cautionary tale in these images that it may be influencing young women to aspire to a version of celebrity that only the extremely privileged few can ever reach.

Whichever side of the fence you sit on, the biggest photos on Instagram all portray positive images of women. They are not being sexualised or objectified in ways that the Web normally finds appropriate. That’s something the Web definitely needs more of.

Read next: Last night's Miss Universe screw-up could have been prevented with good UX