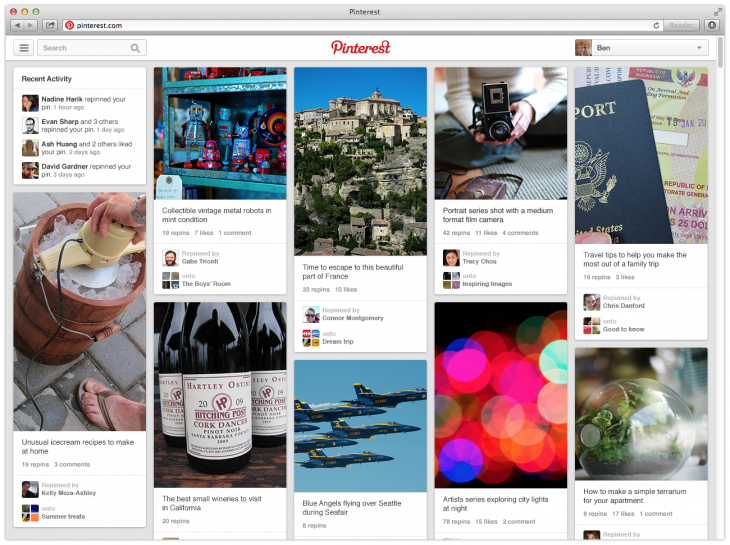 A new study released today from Semiocast, the Paris-based social meda research firm, reveals that Pinterest has currently has over 70 million users, and that 45 percent of new users that registered in June 2013 were from outside the US.

For the study, Semiocast analyzed 70 million of Pinterest user profiles, 69 million of which were created before July 1st 2013, with the intention of assessing Pinterest’s growth and the internationalization.

The study found that international users are quickly joining the social network, and at the current rate, could potentially surpass the aggregate number of American users within 18 months.

Semiocast’s graph records Pinterest’s accumulation of new users, and shows how a growing number of internationals are signing up to platform.

As the graph shows, internationals made up of approximately one-third of the users that joined Pinterest in Q2 of 2012. Only one year later, they made up almost one half of the total first-time users.

In terms of activity, users in the US are far more active than international users, with 79 percent of users who pinned, repinned, or liked a pin during June 2013 hailing from the states.

These numbers are significant because Pinterest is currently in the process of growing its user base abroad with an eye towards monetization. Last month a localized version of Pinterest launched in France, and the company recruited 300 local bloggers to engage with the platform and attract publicity. That launch followed a similar local launch in the UK last May. Despite this, Semiotics states that these launches are not necessarily responsible for the healthy increase in international users.

We’ve contacted Pinterest for their take on this report.