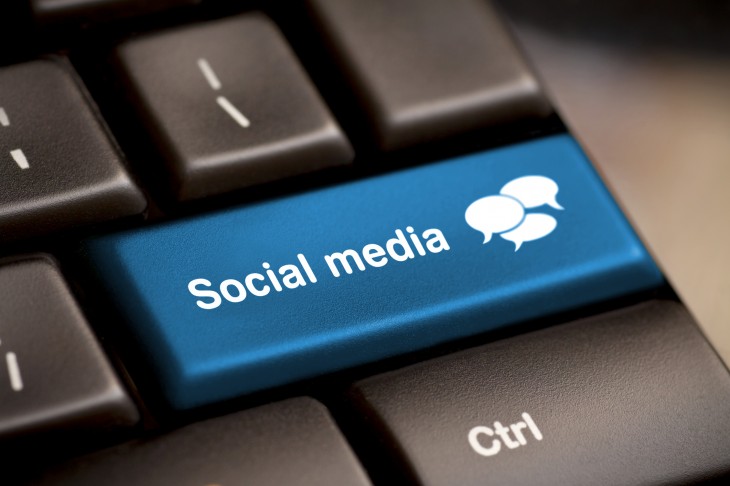 Social monitoring platform Engagio now lets users search online comments and discussions from multiple networks, the company announced today. In addition, they can sign up for email alerts on a specific keyword.

Integrated networks include usual suspects such as Twitter, Facebook, Google+, LinkedIn, but also YouTube, StackExchange, StockTwits, AngelList and Foursquare. So far, Engagio says it has indexed 30 millions comments from over 6 million people on 14 networks and 85,000 sites.

As you may know, Engagio’s initial value proposition was to let users track their social conversations via a single inbox. Since then, it added a Chrome plugin that lets them do so without leaving their Gmail inbox, while introducing an engagement discovery dashboard.

Now enhanced with new features and a new UI, this dashboard lets you find people, articles and sites that are related to conversations on a specific topic. Here’s how it looks: 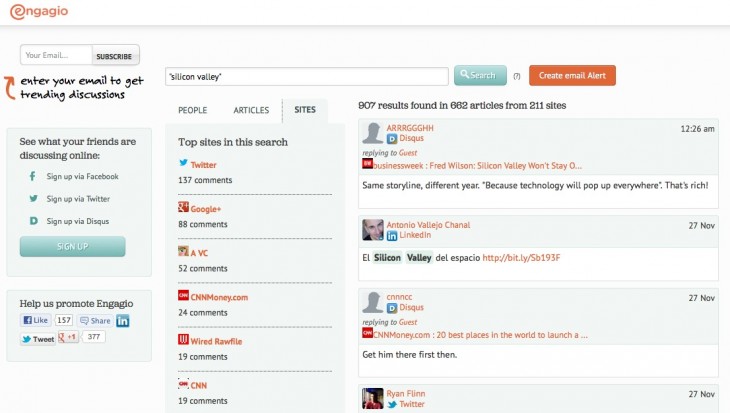 According to Engagio’s CEO and founder, William Mougayar, these features are useful for users to monitor social networks efficiently:

“This helps users to identify potential influencers in the topics they are interested in. We also reveal the communities that are discussing these subjects, enabling users to join these conversations and connect with the right people.”

To sum up the vision that drove its recent changes, Engagio also decided to change its logo to make the “e” look like an “@”. According to the company, this signals the fact that “social engagement is the new Email.” 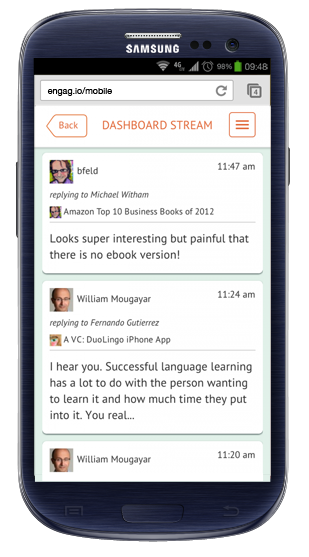 Besides its new Web UI, Engagio is also launching a HTML5-based app that provides a similar native experience on mobile devices. Optimized for Android and iPhones, it lets users follow conversations via the Dashboard’s stream. They can also respond from their social inbox without needing a computer, as Engagio took notice of the fact that social conversations are increasingly mobile.