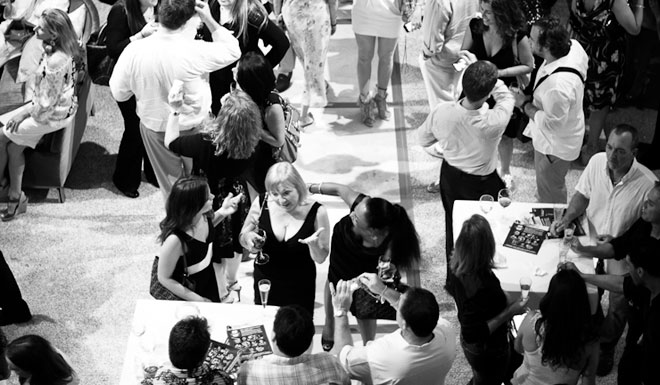 Social media truly is taking over. From communicating with friends, staying updated with family members, and even to networking opportunities with potential employers or business contacts — if you haven’t gone social, you’re living in the past.

Even the world of fashion seems to be caught up in the trend. Popular fashion retailer Saks 5th Avenue just launched their massive interactive Apple storefront that sources tweets hashtagged with #StylelistatSaks, streaming them over several displays.

Yesterday, Bal Harbour Shops took the social leap as well with an innovative and social-score centric VIP lounge for its Fashion’s Night Out party in Florida. What made the lounge so special? You needed to have a Klout score of 40 or higher to get in.

What makes Klout so special?

Klout defines itself as “The Standard for Online and Internet Influence,” a metrics system that rates your social influence score based on reach, user engagement, and how large your following is. Typically, Klout is used as an analytics tool designed to help you better engage and grow your following by discovering where you succeed, and where there is opportunity for improvement.

Which is why when I first received a tweet from Bal Harbour Shops saying, “You have Klout! We would love to invite you to our exclusive Klout Lounge during Fashion’s Night Out!”, I was a bit stunned (and a bit sad that I was too far to attend). My first thoughts were, is Klout really so huge that it is now affecting events that don’t otherwise have to do with this sort of technology?

I, of course, immediately retweeted the invitation and began discussing the craziness of it with my equally social media-obsessed following. Little did I know, this is exactly what The brpr group (the social media agency behind Bal Harbour Shops) wanted.

The “Klout Lounge,” located on the second floor in the center of the mall in Bal Harbour, Florida, could only be accessed by those with high enough Klout scores. Christopher Renz, Agency Director at The brpr Group, has this to say on the matter:

“A Klout score of at least 40 ensures that only the most socially engaged will be in attendance and as a direct result will tweet, check in on Foursquare and post photos on Facebook to their friends and followers, creating a real‐time digital echo for FNO at Bal Harbour Shops”

I also reached out to Renz with a few questions of my own.

The brpr Group speaks with The Next Web.

Sherilynn Macale: What gave you the idea to incorporate Klout as a strategy for Fashion’s Night Out?

Christopher Renz: We wanted a place where the most influential on Twitter/Facebook/Etc would have a place to meet each other. Secondly, by getting these folks together, we could inspire more sharing to create a social echo for the event. We created a Foursquare special for the night to let those who checked in know of the lounge.

SM: Why specifically Klout scores of +40 — was there some reason behind that?

CR: We originally thought 50, but we contacted Klout to ask their opinion and then mentioned that the average score is well below 40, so beginning it there would give a good mix of those who are just building their networks and the long-time enthusiasts.

SM: Were the Klout score invites a success (why), and did you get any interesting attendees out of it?

CR: We got a great response from the invite. Bal Harbour Shops is thought of as older and stuffier and so people were very surprised (and sometimes upset) about the Lounge. A competing Fashion’s Night Out venue tweeted to us offended that they wouldn’t be able to get into the lounge if they attended.

We had a Miami Dolphins player, Alonzo & Tracy Mourning (ex Heat player) Deborah Cox RSVP’d, Brooke Hogan RSVP’d and then went to LA at the last minute. DJ Irie and some Telemundo/Univision talent (it is Miami after all).

SM: How did your client and guests feel about using Klout for the event?

CR: They were very happy with the turnout and the number of people who tweeted and buzzed about the lounge even before Fashion’s Night Out.  They also loved that their own Klout score went from a 38 a week before the event to a 54 on the night of FNO.

How Bal Harbour prepared for their social media elite Fashion’s Night Out event:

Bal Harbour Shops first began several months ago by releasing what it refers to as the “must have Bal Harbour accessory” — a smartphone app that alluded to what all could be purchased during FNO 2011 and beyond. Then, on September 1st, Bal Harbour Shops recognized over 100 of its foursquare mayors with a private cocktail event similarly called “The Mayors Lounge”. During this event, the store mayors were given exclusive FNO previews to reward customer loyalty.

These tactics were both used, of course, as appetizers to promote the coming FNO 2011 Klout Lounge, demonstrating an effective social media strategy that caused quite the buzz across both the Twitter-verse and foursquare world.

With social media now affecting general lifestyle, it will be interesting to see how other agencies and brands move to adopt social influence scoring as a valuable tool in their marketing strategies.

Check out a few videos and pictures from the successful night at Bal Harbour Shops’ Klout Lounge.