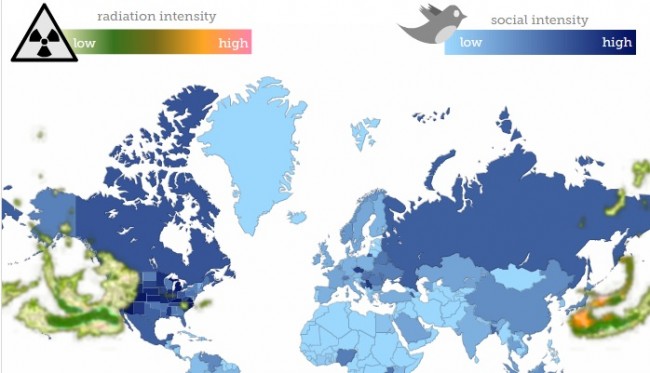 Check out this cool infographic from SocialIntensity.org that highlights the relationship between the movement of the radioactive cloud from Fukushima and the number of tweets posted under the affected areas and the countries in its path.

On March 11, 2011, when Fukushima nuclear reactor blew its top, the global social interest in the unfolding events surrounding the Fukushima catastrophe exploded. Twitter was used as the data source after more than 500 million tweets about Fukushima’s radioactivity were sent in the last month. The data for the Radioactive cloud was obtained from The Austrian Institute for Meteorology and Geodynamics.

Here are some of the noteworthy milestones mentioned on the site:

March 11, 2011 A 9.0 magnitude earthquake strikes off the coast of Japan. The earthquake triggered an extremely destructive tsunami with waves of up to 37.9 meters.

April 5, 2011 Radioactive water from Fukushima NPP was dumped into the Pacific ocean.

Read next: UAE policy to limit BlackBerry, all new smartphones