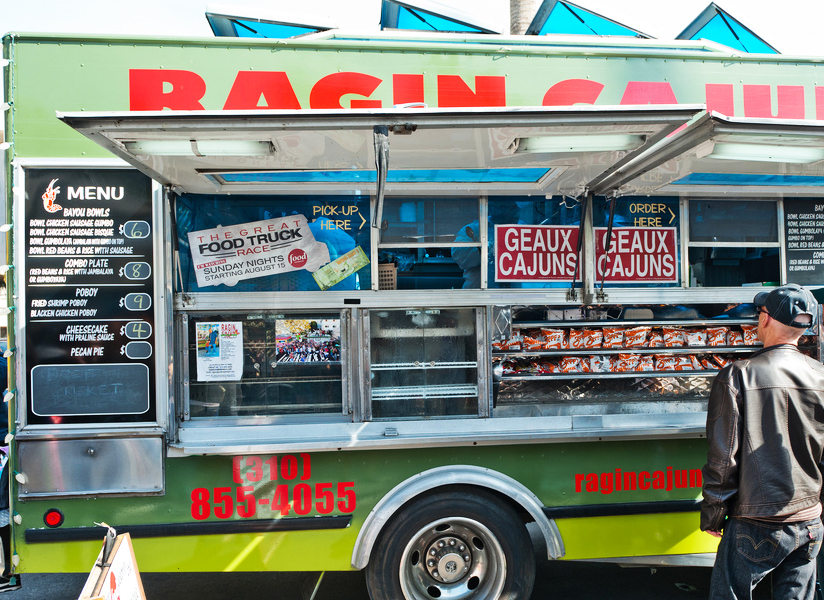 In 1866, Texas rancher Charles Goodnight transformed an army surplus Studebaker wagon into a portable kitchen to feed hungry cowboys. His simple and functional “chuckwagon” was the precursor to the modern food truck. But although food trucks have existed for over a century, they’ve only gained massive mainstream popularity in the past few years.

According to an American Express Market Briefing report, in 2009, one out of eight consumers had eaten at a mobile food truck within the past six months. By 2010, that figure had doubled to one in four. There’s even a hit reality television show, The Great Food Truck Race, where “seven real teams representing the country’s best food trucks hit the road to cook their way across America.”

So what sparked this craze of restaurants on wheels? One of the major driving factors behind the success of food trucks is the way that they’ve taken advantage of social media to engage their customers and their community.

Chances are good that you’ve never seen a paper advertisement for your favorite food truck. In fact, some don’t even have websites, instead relying entirely on Facebook pages to communicate company information. Food trucks are using social media to advertise their brand, draw customers and most importantly – to increase their accessibility. Unlike brick-and-mortar restaurants, mobile eateries have the unique ability to drive around a city or town and serve clientele in many different neighborhoods. But this freedom goes hand in hand with the pressing need to let customers know where a truck is located at any given time, and Twitter is one of the most effective ways to convey that information.

“The food trucks that existed pre-blow up were successful because they did really good food consistently and developed a word of mouth reputation. People would go to the taco truck that was always on the corner of some street, and they would become regular fans. With social media, we can roll around and be found a lot more easily so we can build that same fan base in 15 different spots,” said Scott Baitinger, the creator of Streetza Pizza, a Milwaukee-based pizza truck chosen as the best food truck in the country by Bloomberg BusinessWeek.

Trucks also use social media to advertise sales or special giveaways. The Fry Captain in Washington, DC gives away five milkshakes to randomly selected Twitter followers each week. The Grilled Cheese Truck posts secret passwords on Twitter that customers must provide in order to get special sandwiches that sell out too quickly to be included on the regular menu. And now there’s even a Groupon for food trucks – FoodTruckDeals.com, which launched in early March and will offer daily discounts of 50 to 90% on local food trucks.

Connecting with the Customer

In addition to broadcasting real-time updates on truck locations, or sharing info on specials, social media allows food trucks to directly interact with their customers.  Owners can keep a finger on the pulse of their business, getting instant feedback on the quality of the food and service. “If somebody has a bad sandwich, we hear about it in a second,” said Dave Danhi, owner/chef of The Grilled Cheese Truck.

Food trucks can use Twitter and Facebook to tap into the opinions and preferences of their customers, soliciting input on everything from menu choices to pricing. Danhi remembers: “The last time I was getting ready to roll out a new menu, I asked our Twitter followers, what cheese do you love that you haven’t seen on the truck yet? I got 70 or 80 responses in about 10 minutes, and 40 of those people said pepper jack. It kind of sparked my brain, and now the Pepperbelly Melt is on the menu and one of our best sellers.”

This strategy is doubly effective because it provides owners with free market research while giving the customer a sense of ownership, helping them feel connected to the food they’re eating as well as the people preparing that food.

“We want to build relationships, where people help us build the truck and the brand as a whole,” said Baitinger. “Before we even started, we had our Twitter and Facebook followers select our logo. They helped us establish pricing, and in fact, our Twitter audience actually found us our accountant.”

Interacting with the Community

Beyond communicating with individual customers, food trucks are using social media on a larger level, as a tool to connect with their community. Streetza Pizza noticed a group of local Twitter followers who were involved in urban farming and had grown more tomatos than they could handle. “We reached out and tweeted, we’ll buy them from you!” said Baitinger. “So we used their vegetables as ingredients for our pizza. And I think it was pretty neat that we could provide some financial compensation for all the hard work they did.”

In Los Angeles, food truck festivals have become common weekend occurrences, drawing crowds in the thousands. For example, Truckit Fest is a monthly event run by Phillip Dane, the founder of the famous Fairfax High Flea Market in Hollywood. Foodies can sample tasty treats from more than 40 food trucks while shopping at booths set up by local designers. “If you have 40 trucks and each one of them has 2,500 people following them on Twitter, it’s almost a no-brainer to get them all involved,” Dane said in a recent interview. And although the festivals are centered around the trucks, they’ve also evolved into a forum for people to come together and interact as a community.

In many ways, the attraction of food trucks is similar to the attraction of websites like Twitter. They both advocate transparency- customers can clearly see who is cooking their food and how it’s prepared. And both provide the opportunity to engage with others – while waiting in line for food, it’s easy to strike up an informal conversation with other customers.

“The experience of waiting for the food is as enjoyable as the food,” said Baitinger. “People are chatting, exchanging information, not like when you’re sitting at a table in a restaurant. Food trucks are exciting because they breathe life into an already stagnant restaurant industry.”